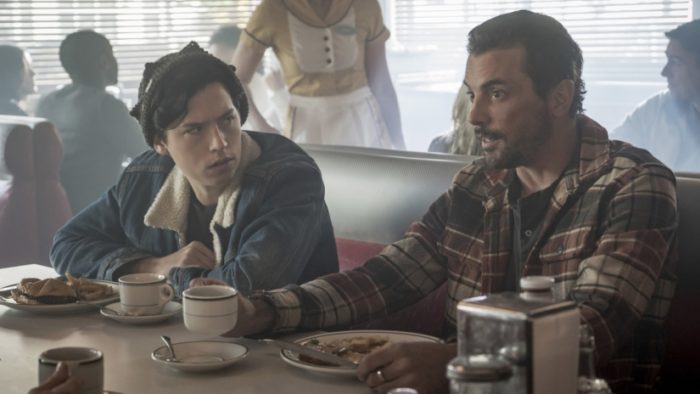 Episode 8 hits a bum note, but Season 2 of Riverdale continues to shine.

Warning: This contains spoilers for Episode 8 of Riverdale Season 2. Not seen Riverdale? Catch up with spoiler-free review of the first three episodes.

Ruh-roh, folks. Archie and Veronica (Archronica?) have hit troubled waters. In this week’s episode – subtitled: House of the Devil – the big lug went and said the “L” word to his girlfriend, and he wasn’t suggesting they binge-watch all six seasons of the acclaimed early 90s television show about the lives of gay women in West Hollywood. Veronica went all distant on him, leaving Archiekins feeling vulnerable, maybe self-conscious, and did that total guy thing, where he started pressuring V and getting shirty with her for not responding positively. Blokes, eh?

After last week’s super-fun triptych style narrative, with three stories served a la Pulp Fiction, Riverdale goes back to its traditional format and delves deeper into the mystery of the Black Hood and the massacre involving a killer dubbed The Riverdale Reaper. The identity of the Black Hood is still unknown, but there is more background work done on the Riverdale Reaper case (Archie and V discover a family of four, no, make that five, were slain in cold blood). And yeah, old man Svenson, the high school janitor, is exposed as the surviving child of the massacre and, for a moment, it’s left hanging as to whether he would put on a black hood, chase the fab four through the corridors of Riverdale High and tell Sheriff Keller, as he put the cuffs on, “I would have got away with it, if it wasn’t for you meddlin’ kids!”

F.P. is out of the slammer, too. Jug and Betty organise a party to celebrate, especially after his Dad tells him he’s retiring from the Serpents and he’s on the wagon. But guess what? Things don’t go according to plan. F.P. finds out about Penny Peabody, aka. The Snake Charmer, getting the Jugman to do her dirty work and confronts his silly boy in a scene recreating The Godfather Part II. F.P. hugs his idiot son and tells him: “You broke my heart.” While Jughead isn’t Fredo-dumb, what he did was reckless, even if it did come from a good place. Maybe F.P., who is now slinging hash at Pop’s, was lying about going straight and needed a solid reason to hit the bottle again and become the de facto head Serpent once more, with feeling.

Mädchen Amick also returns to the fray. Alice Cooper, Riverdale’s queen beesh, rivals Madelaine Petsch as the show’s funniest supporting character. Alice, a former serpent, accompanies Betty to the Serpent’s lair for F.P.’s party, generally makes snide comments about the ex-con and downs shots like she’s on spring break in Cancun. Meanwhile, Cheryl Blossom’s obsession with Josie ramps up a notch. In the locker room at school, Cheryl finds an opportunity to get physical with her new bestie, first noting the lead Pussycat has a back like a sailor’s rope (full of knots). Cheryl just so happens to have a bottle of lavender-scented oil and proceeds, like a total creep, to rub her down. Cheryl’s seductive move is ruined, though, when janitor Svenson walks in, interrupting the massage and apologising, with Cheryl firing back the week’s best lines: “Oh my god, Josie, it’s so not okay. Take your male gaze and male privilege and get out of the women’s locker room! Can you believe that? He should be fired and investigated.” Way to cover, Cheryl.

Riverdale puts high and low art in a blender. We near enough tell you every single review how beautiful the show is lit, how lovely the shot composition is, but Betty’s Coyote Ugly routine (her mom’s words) in the Southside Serpent’s bar is a new height of absurdity. It is RIDICULOUS. What mother would let their daughter stand in front of perfect strangers and do that? Things are bad enough with Archie and Veronica teaming up for a karaoke rendition of Mad World (the song made famous by Donnie Darko). While Episode 8 ends on a bum note (there’s a pun in there, somewhere), though, Season 2 of Riverdale continues to shine. 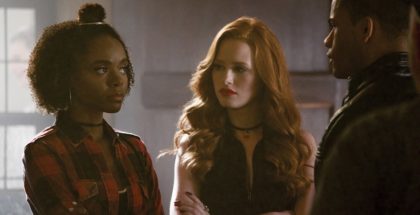