This is a spoiler-free review. Read on below for additional, spoilery notes – plus how to watch online.

Having started the eighth season of The Walking Dead with a blazing opening two episodes, Monsters doesn’t exactly hit the pause button, but it does slow the sprint down to a brisk jog, as the actions of the survivors are beginning to catch up to them. The focus is still on the three-pronged attack against the Saviours, but as the fight is coming to an end, Rick (Andrew Lincoln) and company must prepare to execute the next phase of his plan.

The Damned sees Jesus (Tom Payne) make an important choice not to kill the Saviours who had surrendered at the outpost, even after his compassion almost gets him and Tara (Alanna Masterson) killed. This decision doesn’t go down well with others in his group: Tara and Morgan (Lennie James) are both keen to finish the job, meaning personalities continue to clash. As the captives are marched to the Hilltop, tied together, there is an obvious division between the Saviour prisoners, some who are willing to toe the line, just happy to have the chance to live, while others, mostly under the leadership of a cocksure Jared (Joshua Mikel), are keen to antagonise the survivors. When an opportunity presents itself, they are the first to try and take it, putting Jesus, once again, in an awkward situation with his cohorts.

The war is taking its toll on Morgan, his dual personality torn between the right and the wrong. This turmoil that builds up inside him starts to boil over when some leopards prove they can’t change their spots. His confusion over where the line is drawn between killing to survive and outright slaughter is what Jesus believes separates their group from the Saviours. While they have killed and will kill again, he will not needlessly butcher.

Jesus is living up to his biblical namesake, offering forgiveness and mercy, and that theme continues, as Gregory (Xander Berkeley) returns to the Hilltop. Having threatened his former community to kneel to the Saviours or face eviction, he now forces Maggie (Lauren Cohen) to make a tough decision. This is compounded even further when Jesus brings the Saviours to the Hilltop’s door once again, this time as hostages. Jesus believes there is still good in their group, none more so than personified in Maggie and he trusts her to do the right thing. With all the horror they have suffered in this war and the many that have come before it, now, more than ever, they need to rely on their remaining humanity if there is to be a tomorrow for any of them after the war is over. As Jesus shows empathy, there is none as Rick and Daryl (Norman Reedus) face the Saviours, returning on the orders of Morales (Juan Gabriel Pareja). His surprising return to the series doesn’t produce a heartfelt reunion, but as he holds a gun to Rick’s face, there is a slight flicker of realisation in Rick’s eye that reminds him they are supposed to be better than this.

The conflict the survivors face is complex and full of moral ambiguity. If they don’t completely eliminate the Saviour threat, then there is always the danger they could regroup and retaliate, but then not even Negan (Jeffrey Dean Morgan) mercilessly slew Alexandria, despite given multiple opportunities. The Sanctuary houses a lot of innocent people who don’t want any part of this war – these are the people that Jesus is trying to save but how do you tell the innocent from the wicked? And how do the survivors know that after everything they’ve done, that they’re not the real monsters?

The Walking Dead Season 8 is available to watch online on Amazon Prime Video, as part of a £5.99 monthly subscription. You can also buy and download it on pay-per-view VOD. For more information, click here.

– Aaron (Ross Marquand) saw his partner Eric (Jordan Woods-Robinson) shot during the assault in the last episode and in Monsters they share a tearful exchange, although don’t necessarily say goodbye. Eric sends Aaron back to the fight and when he returns, Eric is gone, leaving only blood behind. Has he turned into a walker or has he begun to make his way to one of the safe posts to seek help? From Aaron’s reaction, he’s sure Eric has joined the ranks of the undead, so it will be interesting to see if we ever see Eric return as a zombie and if Aaron will be able to deal with him properly.

– To help him move on, Aaron is handed the now-orphaned Saviour baby Gracie. While a minor point. as we probably won’t see any more of her, the action of saving her shows that there is still a slither of humanity left in Rick.

– Rick continues to offer his compassion to Todd (Lee Morris), the last Saviour standing after the bloodbath, as he surrenders. After proposing a way out in return for information on the weapons cache, Rick looks disappointed when Daryl shoots Todd point blank. Todd’s death is the second execution Daryl makes, having rescued Rick from Morales with a crossbow bolt. When Rick tries to explain that was Morales from Atlanta, Daryl says it doesn’t matter, “not one little bit”. It may not have mattered, because Morales may have killed Rick if he wasn’t too busy monologuing, but it does matter if Daryl, Rick and the other survivors are to be better than Negan.

– Rick gives a disapproving shake of the head at both executions, especially since he offered his word to Todd, but he seems to know deep down it was the right call to make. This is exactly what Jesus wanted to avoid and why Tara said that Rick would listen to her. If the group continue to differ on how to handle the Saviours, then there may be no need for retaliation from Negan: the survivors may just implode.

– Ever the optimist, King Ezekiel (Khary Payton) continues to smile, and he has every reason to as he narrates his group of warriors through the conflict like a true Bard. Having used cunning to outsmart the Saviours who were tipped off to their location, his group continues forward, each victory spurring them on to the next. Having reached their destination unscathed and their ranks complete, it’s almost poetic that a scout is able to mow down the Kingdom fighters from atop a building. Is this the end of the King? His loyal followers dived upon him, so it is likely that Ezekiel will survive this round, but will they continue to follow him so blindly in the future?

– Zombie Kill of the Week: As one of the undead uses his monstrous bite to take a chunk out of a Saviour captive’s skull, Morgan fires a shot directly through his head, the blood splattering onto the screen that will make you check you didn’t get any of it on your clothes. 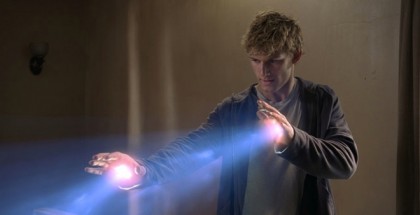