UK TV review: The Walking Dead Season 7, Episode 8 (Hearts Still Beating) | Where to watch online in UK | How to stream legally | When it is available on digital | VODzilla.co 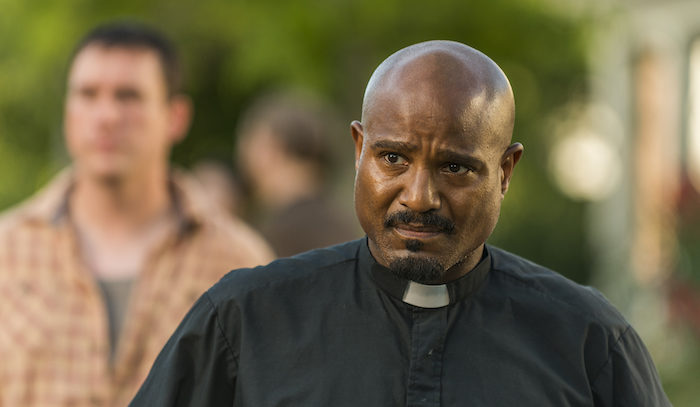 This is a spoiler-free review. Read on at the bottom for spoilers in full bloody detail.

It seems like only yesterday Negan (Jeffrey Dean Morgan) and Lucille were breaking the Alexandrian survivors into the new world order. Eight episodes later and, after jumping around between different survivors and the effect Negan has had on them, here we are at the mid-season finale, and they are still being terrorised. As Negan awaits for Rick (Andrew Lincoln) to return to Alexandria, he merrily explores the compound he thinks could be his new holiday home, blissfully unaware that a number of the residents have their sights on revenge, just waiting for the perfect moment to exact it. The episode explores every survivor with a reason to kill Negan, yet he still thinks he is helping the community. All he wants is half of their supplies and a thank-you.

Rosita (Christian Serratos), now in possession of a bullet and eager to use it, believes she has nothing or nobody to live for, now she has lost her red-headed hunk. She is aware of the risks; Eugene (Josh McDermitt) and Father Gabriel (Seth Gilliam) have both shared their apprehensions and want her to know that she is a vital part of the group. Rosita is independent and stubborn, but her motive is more selfish than she thinks. Although acutely aware that if she takes out Negan, it will very likely signal her death, she hasn’t thought that it might lead to the slaughter of the whole of Alexandria.

Spencer (Austin Nichols), feeling confident after his successful supply run and being complimented by a Saviour, is getting ideas above his station. His eagerness to impress Negan and be more like his mother is blinding him to just how dangerous this group can be. Spencer wasn’t there when Negan first stepped out of the RV, but he insists on a one-to-one meeting to express his concerns of life in the Ricktatership. He has never seen eye-to-eye with Rick and still blames him for the death of his family. Spencer believes he should be the one to lead Alexandria and bring harmony between the two groups, but does he have the guts to do so?

Outside the walls, Michonne (Danai Gurira) has captured a Saviour and is demanding to be taken to Negan. Her plan isn’t calculated or wise, as we have come to expect of her; she is out there alone, because she wants to find a way to win. Again, it appears selfish, declaring she wants to change the outcome for her, but when Michonne comes to the end of her journey and the result isn’t what she was expecting, she finally looks to be coming to the realisation we’ve all had for the past few episodes: they would be better off together.

Since saving the community from a Saviour attack at the Hilltop, Maggie (Lauren Cohan) has become a hero. The residents are supplying her with food as a show of gratitude and respect, which obviously does not make Gregory (Xander Berkley) happy. Her rise to power could be the instigator needed to combine forces with Alexandria, but first, they will have to deal with him. If the Saviours came calling again, he would likely sell Maggie out without a second thought. Maggie has absorbed some of the qualities of her husband, including his hat, but is it in her nature to do what is necessary, when it comes to Gregory?

Rick has been fighting against the floating dead, as he scavenges a boat, while Negan waits for him back at Alexandria. Despite his bounty, Rick isn’t returning to Easy Street; Negan’s patience has run out and he is causing all sorts of bother that Rick must try to, subserviently, clear up. It’s the third time that the two have come face-to-face and Negan is still trying to explain that his actions are actually helping Rick and Alexandria, even if they do appear violent. In a twisted way, he’s right. His methods might be extreme, but he is providing the protection he has promised, so does Rick really have any recourse?

Hearts Still Beating provides a balance of tension, violence and hope – yes, the series that has been described as “too bleak” actually offers some semblance of happiness here (and not a day-dreaming-of-sitting-around-the-dinner-table-eating type of happiness). The dynamic between Rick and Negan is enthralling to watch and, while he is still a slave to Negan, the old Rick is still in there somewhere, just itching to bite out his throat. The jumping between survivors doesn’t cause any distraction. Rather, their storylines complement each other, as the tension quickly rises and apexes with pure satisfaction. The quality of the episodes in this first half of Season 7 has been strong and the performance of Jeffrey Dean Morgan has been impeccable. Taking on such an iconic role from the comic books, he has been able to produce the fear, apprehension and charisma the character needs. Let us give Negan a bit of gratitude. Let us give him that thank you.

The Walking Dead Season 7 is available to buy and download on pay-per-view VOD. For more information, click here.

– Firstly, why didn’t the Saviours take that pool table in their first raid of Alexandria? Seems like quite a bounty that’d go down well, yet it was left behind, twice. Perhaps Negan wants to keep it in his new holiday home because he will be back to visit Alexandria, as soon as they clear up the mess he’s made.

– Honestly, did Negan do anything wrong? Spencer was trying to usurp Rick and do it behind his back, rather than like a man. He has been causing trouble ever since Rick arrived in Alexandria and almost got Olivia (Ann Mahoney) killed, when he hid those guns in his house. Was it a great loss to the group? Rick didn’t seem to think so, when he aggressively stabbed a turned Spencer in the head. It was good to see a character actually turn into a walker for a change too.

– Olivia’s death, on the other hand, did come as a surprise (if you’re not keeping up with the comics). Selected at random as Negan hunted for the person who made the bullet that shot Lucille, Olivia’s death is on Rosita’s hands, which makes her the second person to have blood on them this season, after Daryl (Norman Reedus). His grief over causing Glenn’s death only seemed to make him strong enough to survive the Saviours torture, so how will it affect Rosita? Negan’s motive was more just than cold-blooded killing – he was nearly killed himself, after all – but he didn’t have resort to murdering her.

– Daryl has escaped the Sanctuary and has been reunited with Rick, the two sharing a long hug that everyone wants to be a part of. Again reduced to a few words, Daryl speaks with his squinted eye and unwashed look. He has been inside the Saviour compound, he should have some serious intel for Rick, but now at the Hilltop with Maggie, that’s two survivors, who, if found, will make Negan absolutely furious.

– But everyone is together once again and undoubtedly a plot will be formulated between them. They all have their own information about the Saviours and with Rick’s U-turn on taking them out, they are also on the same page. This should set up an explosive second half of the season: the Saviours may have the numbers and the weapons, but as Michonne says, they’ve survived things they never should have and if anyone has the capabilities of fighting back, it’s going to be these survivors.

– For the first time since Episode 2, we also catch up with Carol (Melissa McBride) and Morgan (Lennie James), both being asked to persuade the Kingdom to stand up against the Saviours. Their scene provides the laugh-out-loud moment of the episode, when Richard (Karl Makinen) suggests Carol knows nothing of fighting. This even trumps Negan talking about the stink-eye look Rick keeps giving him. They want no part of any war, but the Kingdom hasn’t been introduced to Alexandria or the Hilltop yet, Carol and Morgan may be the catalyst needed for everyone to come together and fight.

– Another obstacle that may present itself in the next half of the season could be the mysterious stalker seen watching Rick load supplies into the truck. Stick around for a post-credits tease where the stranger is seen watching Father Gabriel in the lookout post. Who could this person be? One of the Oceansiders looking for Tara (Alanna Masterson)? Maybe the crack-shot who left the threatening note to anyone trying to rob his boat wants to get his stuff back – if he’s still alive? Or perhaps this is a whole new threat? There have been rumours of the graphic novel villains The Whisperers turning up and throwing any continuity from the books out the window. Only 2017 will provide us with the answers we seek…