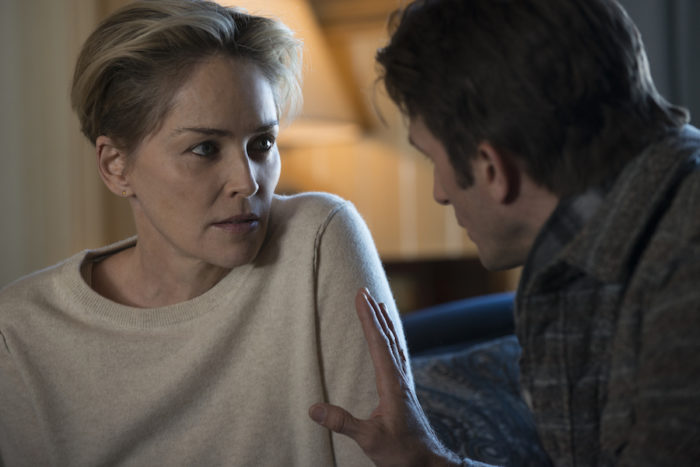 “Sometimes, the best way to sound like you’re telling the truth… is to actually tell the truth.” That’s the advice given to Olivia (Sharon Stone) by her friend, JC (Paul Reubens), in Mosaic. It’s a knowing witticism delivered with a delicious smile and a dry sense of humour, but it gets right to the heart of what makes Steven Soderbergh’s slippery mystery tick. It’s a show about the search for facts, and the blurred line between truth and what sounds like it.

The HBO mini-series broke ground when it was first released in the US, with the cable giant and Soderbergh teaming up to debut the whole thing as an interactive app – like a choose-your-own adventure book, the series allowed viewers to determine which characters to follow, which subplots to unravel, and, ultimately, which ending to uncover. The story? The death of Olivia Lake, a successful writer whose life is picture-perfect on the surface, but gives way to darker secrets and unanswered questions when her body is discovered after a New Year’s Eve Party. Who murdered her?

That’s the question audiences are challenged to answer, and the series plays out like a puzzle box, with every scene, interaction and background detail another piece to take apart and reassemble. It’s a bold, exciting step forward in an online age where viewers can choose what to watch and when – why not who to watch and why? Sadly, in the UK, the show is only available in the old-fashioned, linear format, with the six hours unfolding without our input. That, however, gives us a chance to see what the app doesn’t offer: Soderbergh’s take on events.

The director is a master of genre, whether that’s crafting his own spin on Solaris in half the runtime or delivering pulpy noir thrills with Out of Sight. The recent Side Effects showed us the filmmaker at his peak, able to slink between stories and assumptions with an effortless agility. Mosaic again sees him toy with how to subvert, challenge and frustrate audience expectations – even if, at times, it’s mostly the latter.

We jump back and forth as the story unravels, introducing us to Olivia’s two major suspects. There’s artist Joel (Garrett Hedlund), whom she meets while he’s moonlighting as a bartender, and con man Eric (Frederick Weller), whom she meets on a skiing trip. Joel becomes her lodger and handyman, helping to renovate her mountainside home, while Eric becomes her lover – and both become a source of friction, as tensions, desires and deceit all rub each other up the wrong way. Wading into the thicket is Nate (Devin Ratray), a local detective determined to do the right thing, and Petra (Jennifer Ferrin), Eric’s sister, who has her own ongoing investigation to prove her brother’s innocence.

The cast are all excellent, bringing a believable small-town sensibility to the intimate crime and closed circle of potential culprits. Weller is suitably suave and hard to pin down, the opposite of Ferrin’s well-meaning sister, while Hedlund relishes the chance to sink his teeth into a meaty role – his beau introduced with a sultry, seductive intensity that sparks off Stone’s central performance, before spiralling into bitterness, anger and, later, fear, regret and guilt. That kind of extreme transformation is possible from any of these characters, as we begin to see events from different perspectives; the show gradually draws us from person’s view to that of another, leaving people mid-scene to focus on a particular object or follow someone else.

Devin Ratray, meanwhile, is the MVP of the piece, the former Home Alone star really shining in his deserved career renaissance. His kind-hearted sheriff brings real warmth and humour to the screen – “It’s called The Wire, so yes, they have wires,” he retorts, when someone questions how advanced Utah’s police tech is. “This is Summit. We don’t have wires.” – and also a moral grounding; he’s not just a plot device or a lens for us to look through, but a player in his own right, able to be ruthless and vulnerable, often both at once even while just sitting in his car.

Soderbergh’s version of events gives each person their share of screen-time, his narrow field of vision and direct-to-camera shots occasionally hinting at the more unusual nature of the series’ origins. Ed Solomon’s script, too, ensures that each supporting player has enough of an arc to steal our attention at any point. He weaves a tapestry of moral bankruptcy, as Olivia’s own problems are mined like the minerals beneath her icy estate, unearthing a melting pot of wealth and power in a society where the rich are above all concerned with holding on to, and controlling, their riches. The idea of who should be held responsible for Olivia’s death, or who should agree to stay silent, almost becomes redundant; they’re all trapped regardless, whether that’s in a quagmire of corruption, or simply their own uncertainty.

Perhaps it’s only right, then, that we should feel somewhat caged ourselves, as we’re restricted to being onlookers to this shifting, changing story, one that feels open-ended without the ability to physically select our own interpretation. But while there’s a cool detachment to that experience that may frustrate some, it’s worth it just to see Sharon Stone thaw that chilliness with a smouldering, fiery turn. It feels like decades since the Basic Instinct star has been given such a prominent leading part, and, in an industry where women over a certain age can be forgotten and passed over, it’s a treat just to see her back on our screens, as she reminds us just how good she can be. Mosaic in this edited form may not be quite so radical, but here’s hoping that its other ground-breaking quality really does become the norm.