First look UK TV review: Legion | VODzilla.co | Where to watch online in UK | How to stream

Stylistically ambitious and unpredictably strange, Legion wastes little time in distinguishing itself from the pack.

From DC’s ever-expanding Arrowverse to Marvel’s dark, gritty Netflix series and much more, the superhero genre is booming on the small screen. That rise in popularity means every subsequent piece of comic book related entertainment has to work that much harder to justify their place in the television landscape, and from the first minute of its first episode, X-Men series Legion wastes little time in distinguishing itself from the pack. Both stylistically ambitious and unpredictably strange, the premiere makes a strong case for why we should continue watching.

We begin with an audacious montage charting the early life of David Haller that quickly transitions from a happy childhood into madness, as his telepathic and telekinetic powers begin to emerge. Eventually, we’re introduced to the adult version of Haller (played by Dan Stevens of Downton Abbey and The Guest fame), who is now being treated for schizophrenia at Clockwork Psychiatric Hospital. It’s here that the show’s creator, Noah Hawley, who also created the Emmy award-winning Fargo, starts to play tricks with our minds, by making us consider what’s real and what isn’t. There’s plenty in Legion’s first episode that will evoke thoughts of “What is going on here?”, but while it’s frustrating at times, the ambiguity feels intentional, as opposed to lazy storytelling (we’re looking at you, Sherlock). It will be interesting to see how Hawley and co. go about giving us the answers to the myriad questions this first episode creates.

One thing that’s definitely real enough is the connection between Stevens’ David and fellow mental patient Syd Barrett, played by Fargo alumni Rachel Keller (read our interview with her here). Syd doesn’t like to be touched – she instantly swaps bodies with anyone she makes physical contact with – but nonetheless, she and David form a sweet, humorous, believable bond. That Legion is not concerned with linear storytelling (this episode alone has a ton of flashbacks) should only make this love story more compelling to watch.

But arguably the most compelling aspect of the show is its psychological examination of self-discovery through mutant powers. Such a concept is not new to this franchise – other X-Men films have definitely touched on it – but Legion is already tackling it in new and interesting ways, and being a TV show affords it the time to really delve into it.

That’s not to say there won’t be any pyrotechnics – the final minutes of Chapter 1 feature some fast-paced mutant-on-human action, all the while teasing the foe our protagonists will be battling over the course of the season – but it’s clear that the use of powers will take a backseat to what a mutant’s use (or misuse) of their powers tells us about them. Legion is ostensibly an X-Men spin-off, but the opener opts to avoid any nods to the comics or otherwise. Time will tell if the show continues to keep its distance from its roots, or if it eventually ties into the movies, but for now, that distance is part of what makes the show feel fresh. Here’s hoping it retains some of that uniqueness. 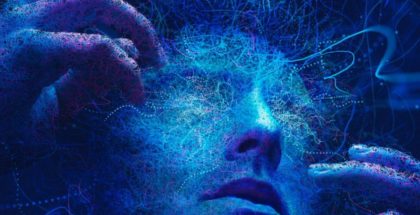