UK TV review: Doctor Who Season 12 Episode 8 (The Haunting of Villa Diodati) | VODzilla.co | Where to watch online in UK 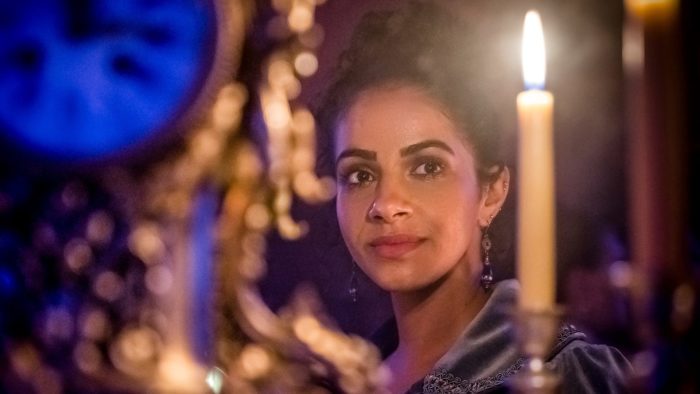 “Nobody mention Frankenstein. Nobody interfere. Nobody snog Byron.” Those are the ground rules for Doctor Who’s enjoyably creepy latest outing, The Haunting of Villa Diodati.

We join them – along with Mary’s stepsister, Claire (Nadia Parkes) and The Vampyre author Dr Polidori (Maxim Baldry) – in 1816, where the creatives gather at the Villa Diodati on Lake Geneva, resulting in a night where the spark of Mary Shelley’s Frankenstein is born.

Literary allusions are woven into Doctor Who’s DNA and Maxine Alderton’s script doesn’t disappoint, playfully riffing on the horror genre as well as the very text these events are destined to inspire. But what’s smart about this episode is the way is weaves its cultural nods into the very fabric of Whovian mythology, adding in references to the show’s own history to complete the spooky puzzle.

Things start slow and steady as we get everything from lightning strikes at each dramatic revelation to disembodied hands crawling through living rooms and director Emma Sullivan steeps the whole thing in an atmosphere that’s suitably eerie and cheesy at the same time. Vases float and people go missing, while the butler keeps popping up out of nowhere.

It’s a nice blend of tropes and ideas, with the lightning even playing a crucial role in powering the monster that eventually does appear – a half-human creature that brings a chilling blend of detached determination and fanatical anger. It’s a shame, then, that Shelley, Byron et al. don’t quite feel developed enough to convince as rounded characters. Miller brings a playful spark and a note of empathy as Mary soon-to-be-Shelley, which is just what the episode needs, but if the real star of the show is otherwise the words of these poets (it ends with a beautiful quote that could plausibly have been inspired by The Doctor) that’s perhaps the most apt achievement.

The TARDIS fam, however, remain on fine form, with Ryan (Tosin Cole) and Yas (Mandip Gill) once again splitting up to investigate – and Graham (Bradley Walsh) having way too much fun guarding one of the party while wearing a top hat.

The third act takes a few too many rushed leaps to wrap things up neatly, and several subplots are waved away with a wink to allow for the episode to reveal its true colours, but like Frankenstein’s monster, it’s a creation of smaller bits stitched together that nonetheless conjures up a haunting and recognisably human soul.

– Cybermen! Who saw that coming? Well, anyone expecting the show to pick up the threads left dangling by Captain Jack Harkness’ ominous warning to The Doctor: don’t give the lone Cyberman what it wants. Or anyone who thought the glowing humanoid outline from the opening double-bill recalled the Doomsday Cybermen from David Tennant’s days and had been waiting ever since for them to rock up.

– Cyberman! Yes, it’s a singular entity that we encounter here, and like Dalek in the first outing for Christopher Eccleston’s Time Lord, it’s proof that the show’s most iconic enemies often fare best when isolated to allow for study up-close. Here, our Cyberman even has a name – Ashad – and a Frankenstein-like appearance of half-human, half-machine to go with it.

– It’s a genuinely disturbing take on the Cybermen, who have lost some of their edge over the years, as we get to see the raw nastiness of their race without the emotional inhibitors installed, but with the cool, mechanical logic still at play. The most effective moment is when Ashad comes across a human baby and spares its life – but not, as we learn, due to some Frankenstein-like soul, but because of a cold calculation that the baby is a worthless runt not worth bothering with. He’s both a soldier and a survivor, a zealous trooper loyal to a cause even when he’s apparently the only one left.

– Or is he? This lone Cyberman, we learn, is after the Cyberium, a mercury-like substance that has bonded itself to Shelley. A sentient super-computer and an AI with the Cybermen database built into it, it’s something of a MacGuffin, but one that promises to pave the way for an epic season finale.

– Because yes, the Doctor lets the Cyberman get what he wants. It’s either that, she reasons, or Shelley dies, and she doesn’t want to risk the whole of human history being changed. The Cyberman, meanwhile, argues that the rise of the Cybermen is inevitable, and The Doctor’s most chilling moment is when she acknowledges that they’re right.

– Speaking of which, Jodie Whittaker has an excellent episode, balancing her natural curiosity with a sense of humour, an undercurrent of frustration and fear and a love of words – plus she gets to dodge the advances of Byron (Jacob Collins-Levy, having lots of fun) with a wicked glint.

– The possibility of actual ghosts aside, the big unanswered question left by the episode is how Jack knew about the lone Cyberman in the first place. Here’s hoping all becomes clear by the final episode.

Josh Peck to star in Turner and Hooch series for Disney+

Catch up TV review: The Secret Life of Five-Year-Olds, Parenting for Idiots, The... February 5, 2017 | Ivan Radford