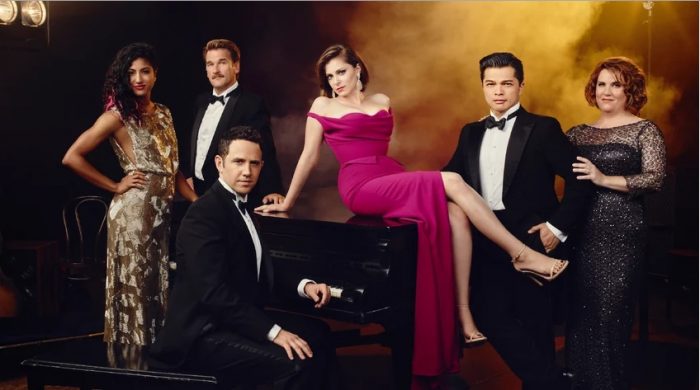 One of the main problems with Season 1 of Crazy Ex-Girlfriend (read our review here) was that it went on way too long. There were 18 episodes and a whole lot of the middle of that was treading water, character-wise. Our plucky, not-actually-crazy-but-definitely-selfish heroine, Rebecca, didn’t progress and neither did any of the people around her. The pace picked up again by the end of the season, but these doldrums in the middle – lifted by the consistent quality of the songwriting – held the series back from true greatness.
The start of Season 2, which is being released in weekly instalments on Saturdays on Netflix UK, both improves and doubles down on these problems. It’s a shaky start, elevated, as ever, by some great songs, and the first two episodes leave the future of the show uncertain.

The weekly release format works in its favour. In the era of binge-watching, Crazy Ex-Girlfriend’s character studies don’t necessarily benefit from watching multiple episodes in a row. Fans who have to watch it in this more traditional method are likely to get less frustrated by the lack of progress. Taken in small chunks, Rebecca’s terrible decision-making and seeming inability to learn from her mistakes becomes a lot more palatable.

Yet the problem nevertheless remains that Rebecca seems so stuck in her old ways that she has barely changed from her early days. She used to stalk Josh from a distance; now, she’s in an awkward, poorly defined relationship with him, but her mania and self-absorption remain a constant. For the show to really take off and have a long-term future, Rebecca needs to become a more complex character and the source of the dramatic tension needs to come from somewhere other than wanting to be liked by Josh. The problem is, that’s the entire premise of the series, so some serious invention is required. The good news is, by the end of Episode 2, Rebecca seems to have made some positive steps, so hopefully, we’ll start to see gradual change in her.

While Rebecca remains stuck in her ways and becomes almost the least interesting character in her own story, Season 2 of the show really excels, as the supporting cast develop more compelling back stories. Paula, Rebecca’s long-suffering friend, has applied to law school and has ceased to aid and abet Rebecca’s ludicrous schemes. Most interestingly, Greg has confessed to being an alcoholic and is seeking help. As these two separate themselves from entanglements with the main character, they’ve become more rounded and interesting people to follow. This shows an element of selflessness from Rachel Bloom, the multi-talented creator of the show, who is being more generous to her co-stars than ever before.
While the plot mechanics whirr away and point towards an uncertain future, the one remaining constant – and the reason that most fans will lap up every minute of the new series – are the expertly crafted songs. So far, this series has included a lavish, perfectly pitched Beyonce-style music video, called Love Kernels, and an Irish drinking song about alcoholism, with brutally realistic lyrics about peeing your pants and vomiting on your cat. As well as lampooning a wide variety of genres, Bloom packs in a dozen different ideas into each song and her lyrics are painfully astute.

The highlight of the first two episodes is undoubtedly Ping Pong Girl, a pop-rock song that reveals exactly how Rebecca wishes that Josh would see her. It features lyrics like “ping pong shows she has control over her body, but it doesn’t threaten my masculinity like basketball and hockey” or “ping pong girl, she’s so indifferent, it makes me want to make a tangible commitment”. If Bloom can keep up this level of wit and intelligence, then it almost doesn’t matter what happens to the characters: Crazy Ex-Girlfriend will always, always be worth watching.

New episodes of Crazy Ex-Girlfriend Season 2 are available on Netflix UK every Saturday, as part of a £7.49 monthly subscription. Season 1 is also available.

Netflix beat BBC to The Crown “because they could fund it”