UK TV recap: The Flash Season 3, Episode 8 (Invasion!) | Where to watch online in UK | How to stream legally | When it is available on digital | VODzilla.co

Between Flashpoint, Doctor Alchemy, Savitar, a new Wells, and more, The Flash has had a lot going on in Season 3. Most of those arcs take a backseat in this year’s Flash-centric crossover episode, which has the scarlet speedster teaming up with Team Arrow, Supergirl and the Legends of Tomorrow to fight off alien invaders known as the Dominators, often to entertaining effect. (Read our take on the Supergirl lead-in to the crossover here.)

Kicking off with an in media res opening which pits Flash and Arrow against mind-controlled teammates, we flashback to a few hours earlier in which Team Flash learn of the threat and quickly assemble their super-friends. Indeed, Invasion wastes little time bringing our heroes together – in a nice nod to the comics, the team meet each other at a proto-Hall of Justice – and with the cast all sharing easy chemistry, the introductions are fun to watch. But while it’s also exciting to watch Supergirl easily defeat everyone in training, it feels odd to have them spar with one another, when an alien threat is at Earth’s door.

Speaking of the Dominators, the major flaw of Invasion is its failure to properly define the alien threat. While they casually kill the President, the episode stops short of adding any kind of depth to the villains – a clear indication that the episode is overstuffed – and it doesn’t help that the CGI leaves a lot to be desired.

Invasion does a much better job of integrating The Flash’s ongoing storylines with the crossover; Barry’s timeline-changing decision at the end of Season 2 earns him a deserved tongue-lashing from the team; for both hero and viewer, it has the desired impact. It also leads to arguably the best aspect of this episode – a heart-to-heart between Barry and Oliver. The latter is very familiar with guilt, and he shows just how far he’s come as a person (and mentor) in giving Barry some much needed advice about how to move forward. Invasion also accelerates the Wally storyline, which has H.R. agreeing to train the burgeoning Kid Flash by episode’s end.

The action in Invasio’ is pretty noteworthy; Heroes under mind-control is a well-worn trope of the genre, but it’s still exciting to see Flash try to outwit Supergirl, while the Green Arrow battles White Canary. It’s all colourfully rendered, and in some instances even pretty creative. Overall, it’s a solid start to DC TV’s ambitious four-show crossover, with an intriguing cliffhanger ending to boot. We’ll see what happens to Oliver and co when the crossover continues with Arrow… (Read our take on that episode here.)

The Flash Season 3 is on UK TV on Sky 1 every Tuesday at 8pm. Don’t have Sky? You can also stream it live and on-demand on NOW, as part of a £7.99 monthly subscription. The contract-free service includes access to a range of Sky channels, from Sky 1 (Legends of Tomorrow, Supergirl, Arrow) and FOX UK (The Walking Dead) to Sky Living (Divorce) and Sky Atlantic (Westworld, The Young Pope). A 7-day free trial is available for new subscribers. 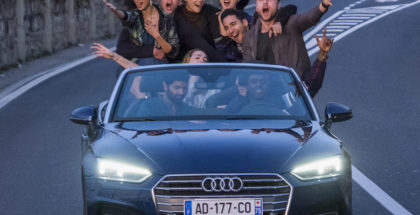