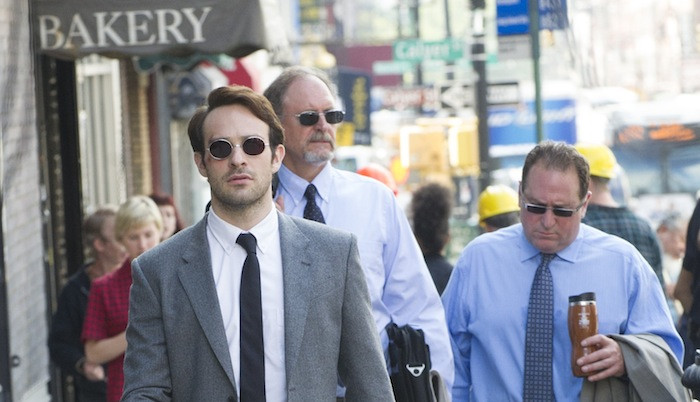 If you haven’t seen Episodes 1 to 8 of Marvel’s Daredevil on Netflix, this will contain spoilers. For our reviews of previous episodes, click here.

“What the hell do I know about Matt Murdock?”

Considering the ninth episode of this mature and gritty crime drama begins with a fistfight between our hero and a bright red ninja, you could be forgiven for thinking that Showrunner Steven DeKnight had gone around the bend during production. But this is Daredevil we’re talking about, and the fight quickly turns into one of the bloodiest and most brutal punch-ups of the season so far.

It’s incredibly difficult to watch – a stark reminder that this superhero is anything but super. Unsurprisingly, it turns out we have joined the action in medias res – an old trick, but one that works especially well here in giving Speak of the Devil a real sense of tragic irony. This chapter and the one following it are, relatively speaking, light on action, but in a sense they need to be. Too many fight scenes and, eventually, they blur into one; the real genius is in knowing when to step on the brakes, and give us time to reflect on just how earth-shattering some events truly are.

Flashing back to the beginning, we see the lovely Mrs. Cardenas (Judith Delgado) coming to the offices of Nelson and Murdock for help – she and the other residents in her building are on the verge of being evicted by Fisk’s enterprises, but she won’t go without a fight. The young attorneys are determined to try and use the law as their weapon, but while Fisk may have stepped out of the shadows, he still has plenty of strings to pull, and the tragedy that ensues is all the more devastating for its inevitability.

Heartbroken, Murdock goes to Father Lentom (the brilliantly taciturn Peter McRobbie) for advice, in a scene that turns out to be one of Cox’s best in the show so far. There’s not been much mention of Matt’s Catholicism up until now, but as he talks about exacting revenge on Fisk, his turmoil is plain to see. He talked about “letting the devil out” way back in the pilot, but as we know from the cold open, that can have disastrous consequences. “Even Lucifer was once an angel,” the priest reminds us, little realising that Matt is in for a pretty big fall of his own.

It’s pretty much inevitable that someone would eventually find out about Matt’s alter-identity, but Foggy’s reaction is much more believable than a glib “let’s face it, this is not the worst thing you’ve caught me doing”. After watching the Avengers fly around the Battle of New York, it would be easy to tell Foggy to get over his indignation, but on reflection it makes sense – when you say it out loud, the idea of a blind lawyer who uses heightened senses to beat up bad guys really does sound kind of stupid.

As Foggy is left to take in this huge revelation, we get a chance to follow the men’s relationship back to the beginning – and understand exactly why Matt’s betrayal hurt Foggy so badly. From the moment the two men first meet in their dorm room at college Foggy only ever treats Matt as a human being, and it’s clear that the two are united in their conviction for helping people – a deep bond it’s difficult to see being repaired any time soon.

We also get to spend some time with Karen and her ally at the New York Bulletin, Ben Urich. Vondie Curtis-Hall has done a wonderful job of making Urich feel like a man permanently on the edge; held together only by caffeine and sheer force of will. It’s a feeling that only deepens when we see the way he cares for his wife (Adriane Lenox). Karen and Urich get up to some serious investigating, which ends with not one but two huge twists with serious implications for Fisk. He may be the one pulling the strings in the shadows, but it seems the strings are pulling back.

Hard-hitting emotion more than makes up for the lack of fisticuffs in these wonderfully restrained chapters. We’ve watched these characters fall and fall, and now it seems they’ve hit rock bottom. The only way they can go from here is up – but who will end up on top?

Marvel’s Daredevil is available to watch on Netflix UK, as part of an £8.99 monthly subscription.

Where can I buy and rent Daredevil online?