The best food TV shows on Netflix UK to replace GBBO | VODzilla.co | Where to watch online in UK 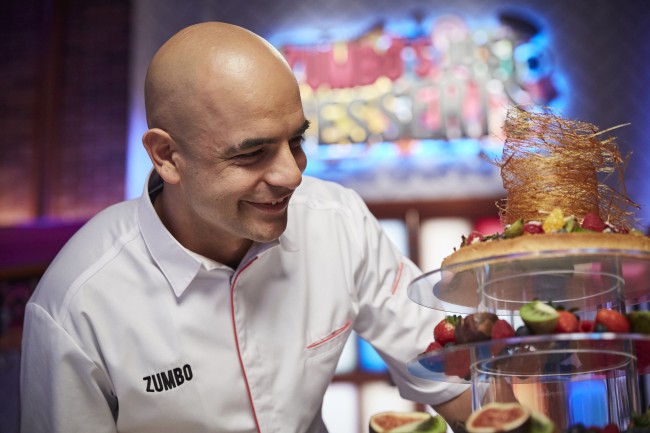 This week sees the end of The Great British Bake Off for another year, which means Tuesday nights just don’t feel the same. There’s no Paul. There’s no Prue. There’s no Noel or Sandi playing about in the background. And there are no cakes, no biscuits, no tarts and (in our living room, at least) no soggy bottoms. What, then, is a baking fan to do? Dish up a slice of culinary TV from our menu of top TV shows to fill that Bake Off-shaped whole in your life – and in your stomach. 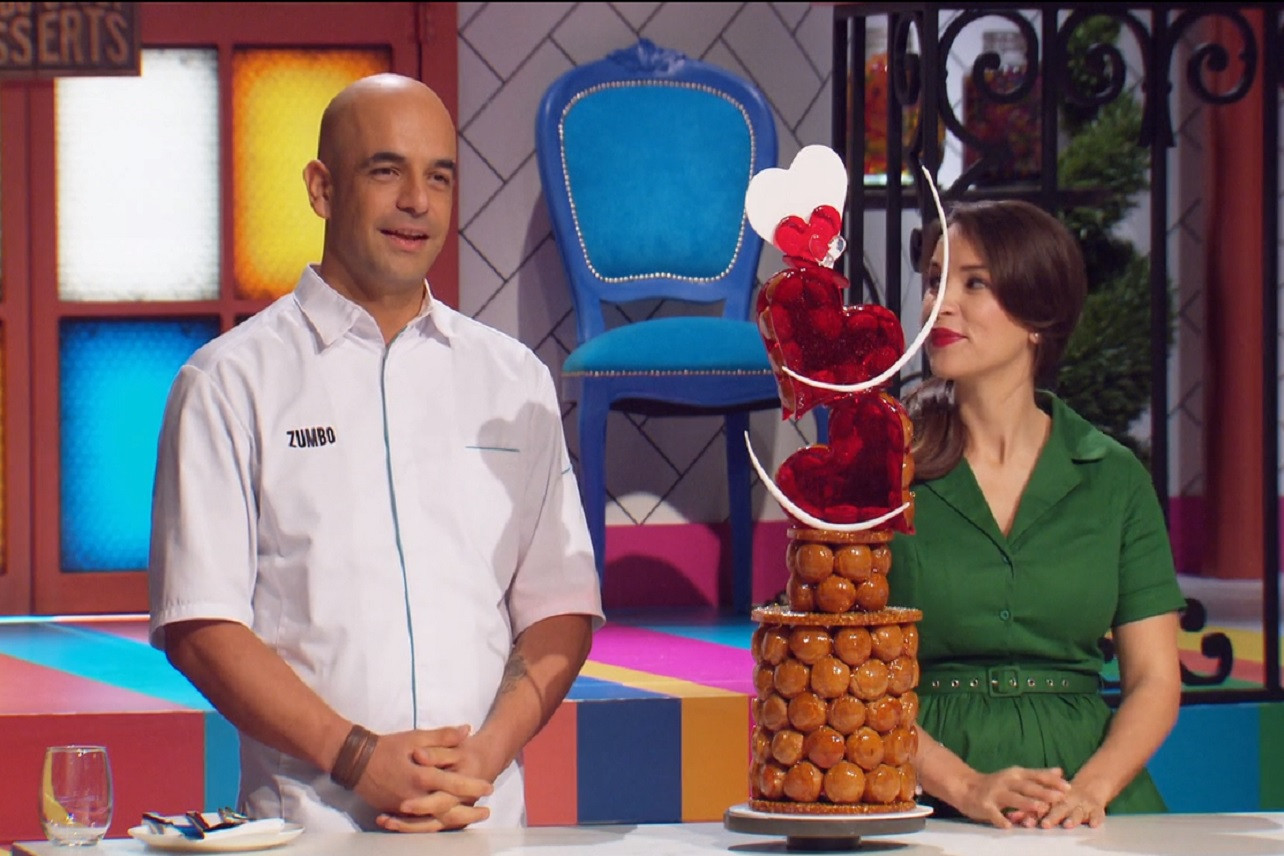 12 amateur bakers gather in one gigantic kitchen to compete at making fancy desserts. In place of Noel and Sandi? Britain’s own Rachel Khoo, a co-judge and talented chef in her own right. In place of Prue and Paul? Adriano Zumbo, an Australian pastry chef with a knack for extravagant creations. Think Heston Blumenthal. But crazier. Zumbo is presented as Australia’s answer to Willy Wonka, and he doesn’t disappoint, setting the bar ridiculously high with all manner of absurdly edible treats, from desserts within desserts within desserts (within desserts) to a golden chocolate duck in a mini-bathtub, complete with gingerbread bubbles. Expect deconstructed puddings, lots of dry ice, chocolate domes, oodles of fruity foam and carefully sculpted flowers. At one point, Zumbo actually unveils a gigantic hat, which floats and spins around in mid-air. It’s like Bake Off, but everything is a Showstopper. That over-the-top vibe infuses everything about the programme, from its impossible tasks to its vividly coloured set. And, in a neat twist, it keeps each contestant from previous episode in the studio, so they can watch from the sidelines. They cheer on their favourites, sigh in sympathy at baking fails and pretend not to be bitter about being knocked off.

Netflix’s latest original baking contest has a neat twist on the typical recipe: here, time is the most important recipe, as bakers race to create sweet treats that look beautiful and taste amazing – all against the clock. The competition is hosted by Hunter March and ruled by two world class pastry chefs: Candace Nelson (co-founder and executive pastry chef behind Sprinkles cupcakes and Pizzana in Los Angeles) and Adriano Zumbo (pictured above). They’re both solid judges, but the star is the format, which allows contestants to carry over any unused time from each challenge to the next round, daring them to speed up without making a mistake. With rounds that vary from aquatic themes or seasonal favourites, this is a novel, entertaining show that’s just different enough to keep your tastebuds tingling.

Director David Gelb’s follow-up to Jiro Dreams of Sushi was Netflix’s first original docu-series – and, alongside Making a Murderer and Marvel’s superhero action, it’s easy to see why a non-fiction programme about food could be overlooked, especially as it’s the kind of show you might find on a traditional TV channel. But that’s precisely what makes this a bold move for the streaming site, as it broadens its horizons. More importantly, it’s really good, as the diverse array of worldwide cooks and their personal stories of inspiration and technique – not to mention the endless shots of food porn – add up to one mouth-watering dish.

“Do you have any questions? Great! I’m not answering them!” That’s the kind of baking lessons you can expect from host Nicole Byer on Nailed It. Netflix’s answer to The Great British Bake Off has a unique angle for a food contest: it celebrates failure over success, as it pits amateur bakers against each other to try and recreate impressive baked goods with no experience or practice. Whoever gets the closest to not making a total mess walks away with $10,000. It’s a slightly mean idea, which stands in stark contrast to the welcoming, encouraging and inclusive approach of Bake Off, but Byer’s infectiously energetic, while guest chef Jacques Torres is on hand to provide amusing assistance when people press the emergency button. Read our full review

“Food is something we all have in common. It’s an essential part of who we are and how we create connections across cultures. In that spirit, we brought together some of the people we admire most to make Ugly Delicious a collaborative forum, a place where it’s okay to have strong opinions and honest conversations about food.” That’s the spirit behind this new series from David Chang, founder of Momofuku, and his determination to discover different cultures, cuisines and cooks – and then find a way to mash them together – is wonderfully entertaining, thanks to his accessible, unfussy and welcoming philosophy. Read our full review

Based on Samin Nosrat’s best-selling, James Beard Award-winning book, Samin’s engaging, informative documentary is rooted in the principle that there are four key ingredients in all of food: salt, fat, acid and heat. Understand these, she suggests, and you can be a great cook. She travels from Italy’s kitchen to Japanese islands to discover the way that fat brings the flavour of the place it originates from or the way that salt is produced in countries where it isn’t readily available. Director Caroline Suh brings a warm palette to Samin’s global tour, and nestled in between the beautifully lensed cuisine are nuggets of knowledge and tips on how to season, prepare and heat your own dishes. Unassuming, insightful and easy to digest, this is a charming addition to Netflix’s streaming buffet.

The late, great Anthony Bourdain was the kind of TV presence designed for bingeing: enthusiastic, informed, respectful and curious, he remains the ideal companion for this documentary series, which takes us on a tour of the globe for discoveries, entertaining debates and culinary delights. He whisks us from Libya to Los Angeles on a quest to experience overlooked cuisine, and it’s that understanding of (and seeking to understand more about) how food works – not just for sustenance but as a way of expressing culture, sharing identity and bringing people together – that makes for such moreish television. You’ll see fast food, slow food, hot food and cold food, all sampled with an appetite for new things and a respect for every bite.

“Rob can’t read poetry in his own voice because he lacks conviction.” That’s Steve Coogan, playing Steve Coogan, talking about Rob Brydon, playing Rob Brydon. It’s par for the course for The Trip, which sees the pair journey around restaurants abroad, eating, drinking and seeing who can do the best Michael Caine impression. But it doesn’t stop there: they do Christian Bale’s Batman and Tom Hardy’s Bane as well.

Two middle-aged actors sitting around getting drunk? Michael Winterbottom’s series sounds so insufferably smug that it’s far from mainstream viewing, but the show plays its hand subtly; Coogan and Brydon send themselves up without mercy, their fictionalised personas cut so close to the bone that you swear they’re not fictional at all. Undermining and celebrating each other repeatedly, they poke at their co-star’s shortcomings with the kind of familiarity that can only – and, indeed, does – come from a genuine off-screen friendship. The stunning scenery is shot with a relaxed eye by Winterbottom, with mouth-watering cutaways to kitchen staff preparing dinner.

Inside No. 9: Every episode ranked (from best to best) 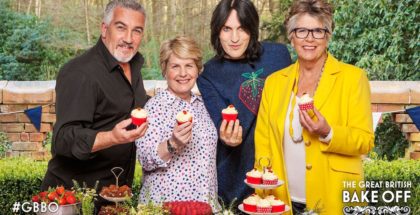