Netflix UK TV review: Turning Point: 9/11 and the War on Terror | Where to watch online in UK | How to stream legally | When it is available on digital | VODzilla.co

This unflinching five-part documentary putting 9/11 in its wider context is a sobering, vital watch.

With this year marking two decades since 9/11, our TV screens have been full of documentaries looking back at the tragic terrorist attacks. While the majority have zoomed in on the day in question, charting eyewitness accounts of the chaos, fear and uncertainty that followed, highlighting the bravery and everyday heroism of the first responders and those who sought to help others, or examining the wider reactions of the people across New York in real-time, Netflix’s Turning Point takes the opposite approach, and zooms out to examine the wider picture of the attacks and how they’ve impacted world history – and, equally tellingly, the world history that led to them happening in the first place.

Director Brian Knappenberger starts with the theory that history can divided into two time frames: before and after 9/11. And he delves into both with equal detail and nuance, bringing a jaw-dropping sense of context and meaning to what, for many, remains too emotional or complex to attempt to dissect. Not since Adam Curtis’ Bitter Lake has there been such an astute attempt to distil the geopolitical tensions between the USA and Afghanistan, with the exception, perhaps, of The Looming Tower. To achieve this, Knappenberger assembles a remarkable list of interviewees, which range from insiders within US presidential administrations and former members of the CIA to, most strikingly, Afghanistan national army soldiers and Taliban leaders.

A lot of these voices are ones that we have never heard on camera before, and those we have seen on our screens talk with a candour and insight that they haven’t had always shown – one of the most revealing conversations is with George W Bush, who admits that he can’t speculate on what the US would have done if there was evidence proving that there were no weapons of mass destruction in Iraq.

With five staggering hours of TV to fill, the series doesn’t rush through these points, deliberately going slowly so that it can focus its attention in detail on each question as it arises. That means we hear from survivors of the attacks reliving that day, we relive the moment when the president was reading books with primary school kids at the time the second plane hit the Twin Towers (complete with commentary from the former White House Chief of Staff) – a moment covered in excellent, absorbing detail by the BBC’s 9/11: Inside the President’s War Room.

But Knappenberger also builds on that moment to not only focus (as the BBC documentary does) on the first 24 hours of Bush’s rapidly formed policy about a war on terror but also to track that foreign policy for many years afterwards. Within the opening episodes, we’ve not only chronicled New York that fateful morning, but also jumped back to the 1979 Soviet invasion of Afghanistan, when the US supported the resistance, to then move around within 11th September 2001 and track each key event and Bush’s piecing together of rhetoric.

The editing is impeccable, making sure we can follow each time-jump with a simple on-screen timeline and taking each leap with coherent logic – while also ensuring that the carefully assembled archive footage moves at a fast enough pace to keep us hooked without descending into sensationalism.

There’s heart-wrenching reflection on the tragic attacks, but crucially there’s also a clarity that comes in hindsight, as the series tracks the aftermath of 9/11 all the way to the present day – through Trump’s blunt speeches about the need for the US to withdraw from Afghanistan, and the galvanising impact that may have had on Taliban forces, to the actual removal of troops under Biden, which has since seen the country taken over once more by the Taliban. As history continues to unfold, the result is a sobering but vital resource in understanding and processing the terrible events on that day – and, perhaps even more importantly, learning from it to avoid similar disasters unfolding in the future.

Turning Point: 9/11 and the War on Terror is available on Netflix UK, as part of an £8.99 monthly subscription.

Watch: First trailer for BBC One’s Around the World in 80 Days 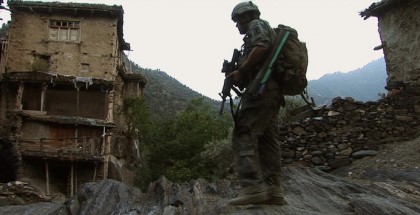