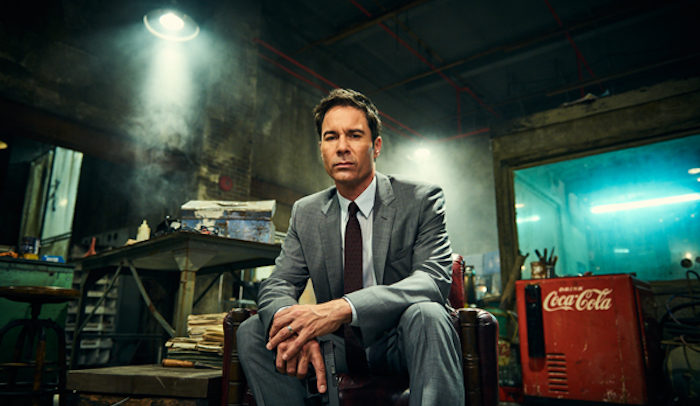 Warning: This contains spoilers. Not seen Travelers? Read our spoiler-free first-look review of the opening episodes.

It feels like only next week that time-travelling series Travelers premiered on Netflix UK. A Canadian sci-fi with Will and Grace’s Eric McCormack in the lead, it impressed from the off with its blend of quick pacing, trashy familiarity and talk of a dystopian future. This month, the show was renewed for a second season – and judging by the end of Season 1, it’s no surprise. While its opening episodes were slick enough to intrigue, the maiden run ultimately ropes you in through creator Brad Wright’s sheer commitment to his concept.

That concept, just to recap, is simple: a group of time-travelling agents are sent back to the present day from the future to save humanity from destruction. But rather than time-hop themselves, they are transported into host bodies, inheriting lives, relationships, illnesses and other problems. Quantum Leap with guns? Travelers doubles down on that idea – and then some.

The first half of the season sees our team attempting to avoid mankind’s obliteration, by diverting an asteroid (Helios) from its collision path with the planet. But where the show could have based its entire run around that threat, it turns out to be only the warm-up act for a really strong second half. Because while the idea of case-of-the-week challenges are all well and good, Travelers’ real strength lies in its premise, and that increasingly becomes the real enemy facing our heroes.

And so, as Episode 5 sees the firing of the laser to push the asteroid away from the Earth, Episode 6 sees the team relax after a job well done. The problem? Protocol dictates that, because their hosts wouldn’t hang out in normal life, none of the team can have contact with each other. As a result, they’re all shoved into their day-to-day routines with an uncomfortable bump.

MacLaren (McCormack), given no way to hide from his wife, Kathryn (Leah Cairns), is even more suspicious than normal – and not just because he’s having an affair with fellow agent Carly (Nesta Cooper). McCormack is excellent as the disoriented, deceitful husband, worlds away from Will of Will and Grace. That’s more notable than ever, as he finds himself delivering a speech about workmates becoming family at a surprise party from his FBI colleagues – one where he repeatedly sees creepy hallucinations of bald people from the future. Even when he has make-up sex with his wife, he’s picturing another person in his mind: a strange woman with a shaved head, whom we presume is the actual Carly – a neat hint that, commendably, is done purely through showing rather than telling.

Indeed, Travelers repeatedly benefits from its lack of heavy-handed exposition, leaving us to work things out at the same time as the characters, without unsubtle explanations or clunky speeches. So when Carly, whose host is a single mother, wakes up to find a child services officer in her house, we’re as surprised as she is – and as unsure about whether they are who they say. Carly, sufficed to say, doesn’t create a positive impression, leaving her having to fight a bitter custody battle against her abusive ex husband, Jeff (J. Alex Brinson). She’s accused of being a sex worker, of being unfit to look after her child – and, as with all of our travelers, she doesn’t have much of an alibi for her absences and actions. After all, she can’t just confess to being a time-hopping secret agent. Imagine how bad that’d look to social services.

Philip (Reilly Dolman), bless him, attempts to help her by pretending to be her lawyer – and that’s not the first time he meets up with his colleagues outside of missions, with a cute hangout between him and Trevor also taking place. Trevor, meanwhile, finds himself thrust into a world of thieving girlfriends and pill-popping besties, and tries to withdraw from that cycle of petty crime, but it’s Philip who has the more engrossing challenge: not just getting over the heroin addiction his host has, but looking after a new pet turtle to boot. (Note to TV bosses: All time-travelling series should have a turtle.)

A brief group therapy meeting gives Phil a chance to vent the secrets building up inside him – and Dolman nails the opportunity to pour his heart and frustration out on screen. Because what better cover than being a cold-turkey heroin user for rambling incoherently about being from the future?

The result is the kind of change-up in pacing that really works when being binge-watched, giving us a chance to a take a beat to become more engaged with the core ensemble. It also paves the way for an increasingly personal focus in the season’s closing episodes. The missions, which before focused on meeting each other and tracking down the anti-asteroid device, become more and more centred on greeting other arrivals. “Welcome to the 21st” soon becomes the show’s unofficial catchphrase.

Each of these fresh travelers, though, go wrong – and it’s to Travelers’ credit that it keeps finding new ways for that to happen. One guy called Donner tries to shirk his mission and ends up confessing everything about the travelers to the District Attorney, aiming to expose his fellow agents. MacClaren, though, swiftly turns the table and reveals that everyone in the room is also a traveler – and has Donner replaced with a fresh download into the host’s body. It’s a nifty bit of low-key tension, which succeeds just by having people talking around a table, but it also introduces the idea of overwriting, one that becomes crucial for the show’s most effective storyline. 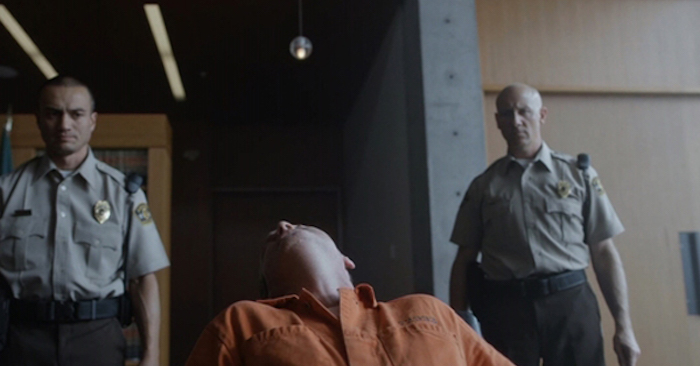 That involves our final member of the group, Marcy (Mackenzie Porter), who, during her time living with David (Patrick Gilmore), falls firmly in love with him. You can tell that the feeling’s mutual because she ends up convincing him to help her perform self-surgery – really nasty, insane self-surgery, in an attempt to cure her of her host’s fatal illness. She’s still a notably different figure to the old Marcy, though, something that only attracts the attention of David’s boss, who tries to fire him firstly for living with the person who was meant to be caring for, and then secondly, for her effectively committing fraud by claiming state benefits, despite being able to work.

If you think that relationship’s complicated, try Trevor’s personal life. He ends up attempting to save his teacher, Ms. Day, who he has a soft spot for, when he discovers that she’s got an appointment with death and is therefore due to be taken over by a traveler. (There’s a rather nice irony in the idea that Trevor suddenly doing well at school is what makes him so notably different to normal.) An ill-fated escape into the woods only sees her fight back against him, convinced he’s crazy, only for her to become the host for a traveler anyway.

It’s a cracking way to introduce a character, not least because it again reinforces the idea that people being overwritten isn’t something anyone can control. So when Grace says she can help to cure Marcy, it’s cruelly logical that the solution is to wipe Marcy’s host and reupload her, minus the bits using her damaged brain cells. And so the climax of Season 1 of Travelers becomes a surprisingly moving story of a love story that’s forgotten by one of the couple – for our travelers, there are punishments for forming bonds as much as there are for breaking them.

In case we need that reiterating further, Travelers even throws in a nailbiting near-standalone episode that sees MacLaren ordered to go and save a guy from a plane that’s about to crash – only for MacLaren’s wife to sneak on board. Never let it be said that the show doesn’t know how to cater for different audiences.

That whole debacle, as well as giving the series a shot of adrenaline, also helps to build the world of the travelers, as we see the freaky nano critters that enter MacLaren’s body to heal him – and Philip grows a new organ inside him to transplant to MacLaren. Before we can get too freaked out by that, MacLaren starts to get flashbacks while he’s in a coma – flashbacks that chart his relationship with his wife. When he wakes up, he’s in love with her more than Carly – proof that Eric McCormack is a great hunky romantic lead. And proof the whole traveler/host connection is more complex than we might think.

All of these complexities would be fine for these people to tolerate, if there was a sense that they were actually achieving something, but Season 1 repeatedly make us (and the characters) question whether they’re making the future better or not. New travelers sent back hint at how bad things are in the future, while Phil’s ever-handy resource of betting on things that are going to happen starts to become unreliable.

The finale sticks one more spanner in the works: enemies who are also travelers. After all, if there are people who go back in time to follow the instructions of The Director without question, there are bound to be people who go back in time to try and undermine The Director. One teenager, Charlotte, turns out to be one of them, a member of “The Faction”, leading to a string of brutal fist fights that work not only on a visceral level, but also on a conceptual one: where Travelers could have stuck with a surface-level piece of lightweight entertainment, the show dives right into its premise with real thought and depth. At first, the enemy was the future. Then, it was the hosts in the present. By the end, it becomes other travelers.

The final twist – that The Director isn’t a person, but a giant computer calculating how to save the world using algorithms – is all the series needs to leave us clamouring for a second season. Grace’s mission, we learn, is to reboot The Director into a safe new mainframe built inside a remote farmhouse, where all our travelers hole up. But as instructions from “The Director” keep appearing for them to kill each other, it soon becomes clear that nobody knows who’s in control and who’s on the right side of fate. Up pops Officer Boyd, once a handy ally of MacLaren, now ordered to kill people. And up pops Ellis, the farm owner, with a shotgun, who tries to shoot Grace, but the bullet ends up going through her and hitting Trevor. In a perfect bit of timing, that’s when MacLaren’s fellow FBI agent, Forbes, storms the born with his own back-up.

Intelligent, ambitious and well executed enough to pull its ideas off, Travelers is a fantastic piece of sci-fi that just keeps getting better. How are the travelers all going to get out of this? Like the characters, we haven’t the foggiest. But we’d give our right arm to have a time machine and find out.

Travelers Season 1 is available on Netflix UK, as part of an £8.99 monthly subscription.

Why you should be watching Travelers on Netflix... December 24, 2016 | Ivan Radford