Netflix UK TV review: Riverdale Season 2, Episode 2 (Nighthawks) | Where to watch online in UK | How to stream legally | When it is available on digital | VODzilla.co 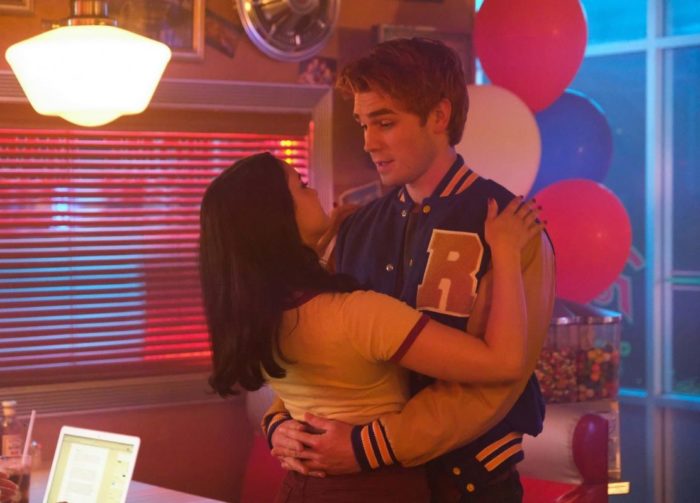 Nighthawks is a very busy episode with a savage, shocking finale.

Warning: This contains spoilers for Episode 2 of Riverdale Season 2. Not seen Riverdale? Catch up with spoiler-free review of the first three episodes.

After the riveting opener, Season 2 continues strongly with a wide-ranging and fast-paced episode directed by 1990s indie director Allison Anders, who returns to the fray after guest-directing several episodes of Season 1.

Since Fred Andrews (Sideshow Luke Perry) got popped in Pop’s Diner, Pop Tate’s beloved local eatery has suffered the slings and arrows of public tongue-wagging. Once everybody’s place to hang after school, the venue has now been branded as ‘Death’s Diner’, where patrons can slurp bloodshakes and chow down on gun, with a side order of bullets served ice-cold.

And so Betty’s out to save Pop’s from closing, Archie’s busy buying drugs and guns, Veronica is continuing to distrust her folks (with good reason), Jughead makes a move to save his old man from a 20-year stretch in the slammer, Cheryl Blossom is living in some sadomasochistic horror movie where she controls her severely burned and frightened mother, and the masked killer strikes again in a scene paying homage to David Fincher’s Zodiac (2007) – two kids necking on a lovers’ lane get gunned down, as Donovan’s Season of the Witch soundtracks the mayhem.

As homages go, the final sequence of Episode 2 was an absolute joy and furthered last episode’s suspicion that series creator Roberto Aguirre-Sacasa is cleverly mining his horror past and really darkening the mood with Season 2 (Season 1 was hardly rainbow skies and unicorns frolicking in the woods, mind you). As well as the Zodiac tribute, there was Jughead’s hilarious line to Archie, still refusing to sleep and intent on protecting Fred from whomever shot him: Jughead entered Archie’s house, saw his jittery pal and referred to him as looking like one of the ‘dream warriors’ from the classic A Nightmare on Elm Street 3. It’s usually Veronica with the postmodern referencing, but Jughead’s got game, too.

It was also great to see Twin Peaks alumni Madchen Amick being given something to do. Alice Cooper, rumour has it, is a witch or au fait with magic – remember when she burned incense (or whatever substance is was) way back in Season 1? The town’s queen bee and newspaper editor is definitely a person of interest, when it comes to any potential connections between Riverdale and Roberto Aguirre-Sacasa’s Sabrina the Teenage Witch revival. The character just so happens to hail from Greendale, the next town over, and fans are already suggesting – hoping, even – there will be a crossover or an introduction of Sabrina in Riverdale. It would be a pretty ballsy move, bringing unambiguous supernatural elements into a show already using horror tropes and vibes without stepping foot into that world proper – did we mention the use of Season of the Witch (ahem) on the soundtrack?

Whether Alice is a witch or a witch’s familiar is one for forums and social media, but she’s definitely a busybody and party pooper, noting how Betty’s good work saving Pop’s with a retro dining experience (featuring Josie and the Pussycats singing Kelis’ Milkshake on the roof of the building) brought drug dealers to the parking lot. Alice loves a scoop and so what if her daughter’s well-intentioned plan got shot to pieces?

Anyway, it was revealed Hiram Lodge – Riverdale’s answer to Scarface, to quote Alice (another of this week’s 1980s movie-referencing quips) – secretly bought the place and asked Pop to stay on managing it, allowing the town to think everything is back to normal and that an institution will not go into that good night. Hiram is desperate to get into his displeased daughter’s good book again and yet this act of kindness and community is likely to blow up in his face down the line.

As ever, Riverdale looked absolutely stunning. Borrowing heavily from 80s thrillers and Italian horror, the splashes of neon and primary colours gives the series a distinctness and artful look most other shows would kill for. This week’s best shot featured Betty and Jug leaving the Blossom house at night, the aqua blue light (Riverdale’s signature lighting scheme?) flooding the woods as they walked off. It was a shot worthy of Argento’s Suspiria (1977), as if momentarily Jug and Betty stepped into a dreamlike fairy tale. The artificial, unreal nature of the heavily stylised lighting and shot composition is one of Riverdale’s great triumphs.

Riverdale is available on Netflix UK, as part of an £9.99 monthly subscription. New episodes arrive every Thursday, within 24 hours of their US broadcast.