Netflix UK TV review: Dead to Me Season 2 | Where to watch online in UK | How to stream legally | When it is available on digital | VODzilla.co 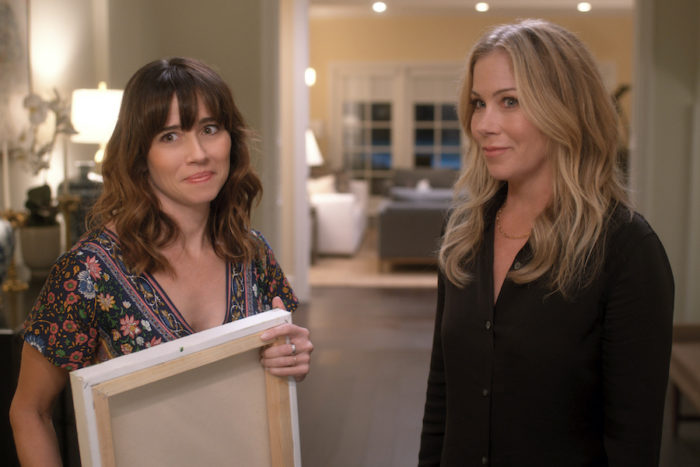 Warning: This contains spoilers for Season 1 of Dead to Me. Not caught up? Read our spoiler-free review here.

“You need to forgive yourself. “Ewww.” “Yeah, I know it’s disgusting.” That’s the sound of Jen Harding (Christina Applegate) and Judy Hale (Linda Cardellini) returning to Netflix for a second season of Dead to Me, and the show’s blend of potboiler thrills and surprisingly cathartic character drama is as darkly entertaining as ever.

Season 1 saw the two unlikely friends brought together after Jen’s husband was killed by Judy and her husband, Steve (James Marsden), in a hit-and-run. The tables twisted and turned as Jen discovered the truth until Steve ended up face-down in her swimming pool. Season 2 picks up with them trying to work out what do with the body, with Jen telling Judy that she killed Steve because he tried to attack her. It’s a nicely thought-out reversal of Season 1, as we only gradually discover the exact circumstances of Steve’s death – ensuring that we’re not sure who to trust, and are counting down the moments until their friendship is threatened by the latest revelation of deceit.

Because Dead to Me, really, isn’t a thriller about murder or a cat-and-mouse police drama, but a tale of friendship being put to the test. Applegate and Cardellini are a joy to watch together, unearthing new depths to their anger or forgiveness. Cardellini’s whimsical, upbeat presence still remains as opposed to Jen’s more tightly wound personality, and their interactions are fun to watch because they consistently find a neat middle-ground between the two extremes. Yes, Steve is dead, there are rats around the freezer where they’r storing his corpse and the Greek mafia might be on the scene, but hey, there’s cherry pie in the oven.

Showrunner Liz Feldman and writers use that push-and-pull dynamic to allow the show’s tone to veer wildly between light and shade, while rooting it in their convincing mutual affection – the expanded role for Jen’s well-meaning neighbour Karen (Suzy Nakamura) highlights just how attuned the two real friends are to one another’s sensibilities, and just how genuine our two leads’ chemistry is. What elevated Dead to Me to something quietly spectacular, though, was James Marsden, who continued his quest to be Hollywood’s most underrated actor as Steve, at once manipulative and seemingly perfect.

Wonderfully, he still gets to play a role here, as we get flashbacks to Steve’s demise and also a chance to see another side to Marsden’s performance – the apparently kinder side, which is nonetheless laugh-out-loud funny. Marsden’s ability to pick roles that allow him to undermine his all-American chiselled appearance is something approaching an art, and fans worried that Dead to Me might deflate without him won’t be disappointed.

The other secret to Dead to Me’s appeal is how absurdly contrived each episode’s conclusion becomes, as the plot escalates the stakes just in time for each chapter’s end credits. It’s like being blindsided at every crossroads the series reaches, as the script repeatedly finds ways to invert its initial premise and introduce new situations where either character might be unmasked for some kind of wrongdoing.

Jen’s sons are now not just emotional ballast but players capable of wrecking things in their own right – Charlie’s (Sam McCarthy) love life and Henry’s (Luke Roessler) involvement in his church’s over-enthusiastic choir are as cringe-inducing as they are hilarious, but also leave you wondering every second what chaos they might accidentally rain down upon the family. And, underneath their own trauma and challenges, there’s the fact that they trust Judy as much as Jen, maybe more so, when it comes to talking about their problems.

All of this shouldn’t work as a TV show, but nobody seems to have told Dead to Me that, and it continues to breezily skip through every narrative lurch with nail-biting suspense, before slowing down for moments of deeply moving grief and melancholy, or sensitive explorations of abuse and gaslighting. At its heart are two women on the verge not of a breakdown, but of breaking the facade of domestic bliss, of homicide, of brazen honesty, of compassionate support for their worst enemy, or, at the show’s best moments, of learning to forgive themselves for their worst traits. Like Desperate Housewives distilled down to something sharper and more concise, the result is oddly upbeat despite its subject matter and utterly compulsive – expect to binge through the five hours in a weekend and still want to spend more time with its strangely sweet main couple. Can their friendship survive this latest test? You betcha. Roll on Season 3.

Dead to Me is available on Netflix UK, as part of an £9.99 monthly subscription.