Netflix UK TV review: Cursed | Where to watch online in UK | How to stream legally | When it is available on digital | VODzilla.co

Upsettingly less than the sum of its parts, this Arthurian retelling doesn't live up to its noble intentions.

For every generation, the prophecy must be fulfilled. For each new audience, the networks must provide. And so, in 2020, we are treated to a new retelling of the myth of King Arthur, with a fresh twist to the tale that puts one of the legends’ few female characters – Nimue, the Lady of the Lake – front and centre.

Nimue’s story is not a simple one; little more than a plot device in most of the legends that feature her, she is either an omen of destiny (if you’re Arthur) or doom (if you’re Merlin). Even with a narrative built around her, it’s a tough gig to tell a story that centers on a woman whom the audience knows from the off is destined to be sidelined. But our quest is to review the show and so, setting cynicism aside, we journey onwards, clapping our coconuts together to make the sound effects.

Based on a graphic novel of the same name by Frank Miller (yes, the Frank Miller) and Tom Wheeler, Cursed is the latest in Netflix’s long line of fantasy-tinged YA adaptations. But is this the one we were promised? The one destined to save the land and, at the same time, the summer’s schedules? There’s definitely some intriguing merit in the graphic novel’s central concept, created by Wheeler to get his daughter interested in Arthurian legends. And far from trying to ‘shed light on the true identity’ trend that has made such tiresome work of figures like King Arthur and Robin Hood of late, this story sticks primarily to the allegorical – read, magical – intentions of the original myth. Through everything from potion-mixing and whispering voices to the passable-but-still-dodgy CGI, magic is infused throughout the story, in juxtaposition with the lives of Arthur and his knights-to-be.

But in this prequel, Arthur is a bit player in a bigger story that looks at the conflict between the outlawed, magical Fey and a sinister religious order called the Red Paladins – which anyone who has read Riverdale won’t be able to take seriously – and sees Fey-touched Nimue on the run from the Paladins after they burn her village, tasked by her dying priestess mother to return a magical sword to a man called Merlin.

Going in, there are things to like about Cursed. Katherine Langford (of 13 Reasons Why fame) captures the naivety of a young woman coming into her powers while occasionally able to display the confidence that rises as she adjusts them. Devon Terrell offers a charming and roguish take on the mythic Arthur, and Vikings’ Gustaf Skarsgard’s drunken, disenchanted Merlin completes a potentially interesting central trio. Unfortunately, they are let down by an infuriatingly clichéd and tonally inconsistent script, which seems to take the idea that good fantasy shows simply require a lot of moody, breathy lines about destiny interspersed with some token PG-13 jokes and call it a day.

Nimue’s potential lead appeal has cold water thrown on it by her being sidelined within minutes of other characters being introduced. Arthur labours under the weight of both his destiny and an inevitably noble duty to honour his father’s legacy. True, the show has a tough job to do to build up Arthur’s story – and character – while also trying to do justice to Nimue, but in a story about a young woman understanding her destiny (much like in Sky’s Britannia) there seems little care or attention on developing her more deeply – and an infuriating lack of female writers may have had something to do with that. Sure, it’s a plot-driven show, but that doesn’t mean the supposed lead characters should be so poorly serviced. (Although, with this many plots, it’s a future that it wouldn’t have taken Merlin to predict.)

Familiar clichés also abound to drag us down further into the depths; a score that crashes merrily from folksy to ominous, with a moment of revelation for our reluctant heroine soundtracked by a note-for-note homage to Batman Begins. The Red Paladins’ murderous intentions clash with the “token villain” shtick of their benefactor, Uther Pendragon. Naff costumes, wacky camera angles (say what you like about The Witcher but it knows how to shoot a fight scene) and chatter about “coin” (OK, so The Witcher isn’t faultless) tick yet more lazy shorthand boxes. And, unlike Britannia with its propensity for sex, violence and confidence to be absolutely ludicrous, an earnest YA show needs to work a little harder to keep us engaged.

Better plotting, better consistency and a more delicate evolution of the tone (one of the strengths of the BBC’s Merlin adaptation that made a star of Colin Morgan) might have made Cursed work, along with a clearer focus on whose story the show is trying to tell. But sadly these are yet to be dredged up from the lake.

Cursed is available on Netflix UK, as part of an £9.99 monthly subscription. 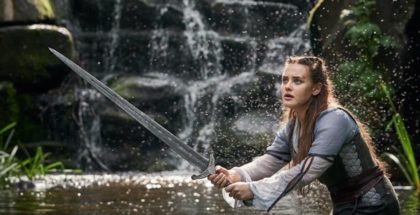