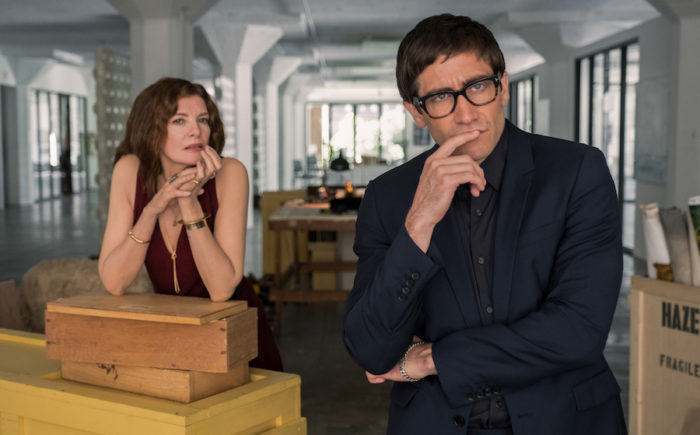 Dan Gilroy's satirical horror is more surface than substance, but what deliciously gruesome surface it is.

“What’s the point of art. if nobody sees it?” asks gallery assistant Josephina (Zawe Ashton) in Velvet Buzzsaw, Dan Gilroy’s new satirical horror. Released by Netflix worldwide after its premiere at Sundance this week, the remark takes on a post-modern quality, one that fits right into a film that’s full of knowing self-awareness.

Gilroy drops us into the middle of the Los Angeles art scene, a melting pot of next-big-things, also-rans and faded hacks, all of whom are preyed upon by the sharks of finance. Said sharks sink their teeth into their roles with glee, led by Jake Gyllenhaal as art critic Morf Vanderwalt and Rene Russo as gallery owner Rhodora Haze. The former makes and breaks careers, while the latter profits off them, a self-consuming cycle of shadowy corruption and pristine white walls.

To say that the art world can be vain, though, is hardly a scathing surprise: Velvet Buzzsaw does for painting what The Neon Demon did for modelling, namely state the obvious but in uproarious, gloriously over-the-top fashion. Much like Nicolas Winding Refn’s thriller, director Dan Gilroy laces his commentary with a savage, inventive streak of scares. They come in the form of darkly vivid paintings by Vetril Dease, an unknown artist who is found dead outside his apartment, with instructions left behind to destroy all of his work. Naturally, though, that doesn’t happen: Josephine decides to stick a price tag on them instead, teaming up with Rhodora and Morf to create L.A.’s next undiscovered sensation.

At the same time, strange things things start happening to those around them, as every snob, shill and salesperson in town appears to meet a sticky end. There are no points for guessing what the cause of these mysterious deaths are, although Velvet Buzzsaw disappointingly shies away from going into great detail about the forces at play – this is a film, aptly enough, that’s content to gloss along the surface and soak up the red splashed all over the canvas.

And what a surface it is. Brought to life by a vibrant cast that includes John Malkovich and Toni Collette, the backdrop for all of these odd occurrences is superbly realised, painting the modern art industry with the broadest of strokes and the tiniest of acting flourishes. It’s held together by Gyllenhaal, who, after Nightcrawler, once again works with Gilroy to deliver a wonderfully memorable character. Gyllenhaal is clearly having an absolute ball: his Morf is hilariously precious, brilliantly loathsome and bursting with bizarre facial expressions. “A bad review is better than sinking into the great glut of anonymity,” he muses with a serious frown in one scene, then starts bellowing in the next. “I am not your mouthpiece!” he yells at one artist wanting a better review. “I appraise out of adoration – I further the realm!” he pompously declares at someone else looking to use him to score a quick buck.

It’s worth tuning in just to see Jake and his deliciously quotable dialogue, but Gilroy echoes his leading man’s turn with some enjoyably creepy set pieces, which device some truly surprising ways to dispatch each victim. Not unlike Final Destination, there’s some satisfaction in seeing these people shuffle off their mortal coil, and Velvet Buzzsaw balances that familiar pleasure with enough unexpected tricks to make for something unabashedly gory, gruesomely surreal and beautifully crafted. The satire’s not particularly cutting, but for pure thrills alone, Velvet Buzzsaw works, especially when it comes to realising its title, as the film leans more and more into its own gaudy atmosphere. There’s little substance beyond Gilroy stretching his genre muscles, but with Netflix behind it, and that starry cast in front, there’s no risk of nobody seeing it. Is it a masterpiece? No, but for those who know what they like, there’s an art to this unhinged ride.

Velvet Buzzsaw is available on Netflix UK, as part of an £8.99 monthly subscription.