Netflix UK film review: Jim & Andy: The Great Beyond – Featuring A Very Special, Contractually Obligated Mention of Tony Clifton | Where to watch online in UK | How to stream legally | When it is available on digital | VODzilla.co

Jim Carrey's profound behind-the-scenes doc is a bizarre study of art, artist, life, the universe and what anything even means.

“No one knew what was real and what was not, most of the time,” says Jim Carrey, as he guides us via a talking head interview through archival on-set footage that he himself organised, as he shot 1999’s Andy Kaufman biopic, Man On The Moon. Sick of the usual electronic press kits and their simplistic interviews with actors, and limited insight on the set, Carrey wanted something more authentic, more warts-and-all, so the actor hired Andy Kaufman’s old co-writer, Bob Zmuda, and his former girlfriend, Lynn Margulies, to handle the duties. The result – Jim & Andy: The Great Beyond – is a bizarre examination of art, artist, life, the universe and what anything even means. Also, it’s a funny look at the making of Milos Forman’s Man On The Moon. But mostly, it’s the former.

Carrey goes method, maybe even actually reaching through the great beyond, on set of the film to inhabit Andy’s mannerisms, nature and ethos, which delights co-stars, old friends and Kaufman’s actual family. But then, every so often, and increasingly as the shoot goes on, Tony Clifton wades through the childlike wonder and goofy sweetness to swear, drink, ogle folk and get into everyone’s faces. Footage of Carrey in Clifton’s guise – driving his expensive car, bag over head to avoid paparazzi, driving into a wall, and then keeping the foot down – is just a literal metaphor for what follows. And even now, Carrey seems confused as to how it all played out, and perhaps a little scared of this mania. At points, we see crew, cast, and even Milos Forman himself bemused, scared, angry, irritated and just driven to madness by this deep character creation, and how it brings demons out beyond the screen.

Not that Carrey’s Kaufman is an innocent. As soon as wrestling legend Jerry ‘The King’ Lawler walks on set, Carrey’s understanding of the Kaufman/Lawler feud is just to truly antagonise and rile-up Lawler at every moment. Lawler, kindly, stands and watches, leaving Carrey be, knowing he could obviously stop him but sees no need. Lawler’s insights on camera in the archives are great to build an understanding of the real Kaufman’s relationship versus Carrey’s less-mannered bullhorn. It’s hysterical to see Carrey just clown around as a man who could snap his neck stares, waiting for it to be over. But then, the laughs stop and one begins to wonder how much of this is a performance, and how much is a cry to feel something, to mean something, by connecting to another person no matter the cost. A punch, after all, is still contact.

“I was thinking, as an actor, in my head, ‘how far should I take this? How far would Andy take this?'”

As the film continues, Carrey’s guide drips into his career, the prelude to becoming Andy Kaufman, not just in their similar vibes, but in what it is to need the attention, to want to be funny, or make people laugh, or clown around. And then, Carrey goes somewhere else. Like Andy and Tony, Jim Carrey stops playing the role of Jim Carrey, funny actor, and, as we’ve seen in recent years, he introspects and provides some dark, tragic nihilism, just to remind the viewer that as fun as something is, it amounts to nothing when all is said and done. We’re nothing but the moment. We’re all fleeting. And then, someone else looks back at what you’ve done, and moves on.

Jim & Andy: The Great Beyond – Featuring A Very Special, Contractually Obligated Mention of Tony Clifton is a bizarre piece of work about a bizarre man playing a bizarre man, or embodying him, or even becoming him fully and truly, and then leaving the world with nary a hint of how to find him again. If you love Man On The Moon, if you are mystified by the legend of Andy Kaufman, if you are just the littlest bit interested in Tony Clifton hanging out at the Playboy Mansion, Netflix’s documentary has a lot of material just for you. A strange trip, this is a film that ebbs and flows, that irritates, confuses, destroys, brings laughter, induces tears, sparks anger, and makes you scream… and then contemplate your entire existence. Not bad for a film about Jim Carrey clowning around on a movie set.

Jim & Andy: The Great Beyond – Featuring A Very Special, Contractually Obligated Mention of Tony Clifton is available on Netflix UK, as part of an £9.99 monthly subscription.

Is Amazon eyeing up an ad-supported video service? 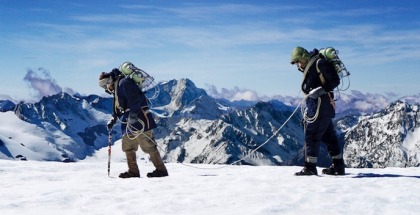