Netflix TV review: Dragons: Race to the Edge | VODzilla.co | Where to watch online in UK

In fact, the animation studio has been at it for some time, with two seasons of DreamWorks Dragons previously released on Cartoon Network (eagle-eyed fans will have spotted the odd episode on BBC iPlayer in the past year). Now, the third season (titled Race to the Edge) is swooping exclusively onto Netflix. It joins a growing library of Netflix originals from DreamWorks – a deal between the two in 2013 committed them to creating 300 hours of content – including Puss in Boots and All Hail King Julien. So far, they have been harmless enough cash-ins, if far from classics. Dragons: Race to the Edge, though, has some of that big screen magic in its breath.

The show is set between the two feature films – which is why, corporate fans, they were set five years apart – as Hiccup and his team of Dragon Riders head beyond the borders of Berk to roam the world of Cressida Cowell’s books. Anyone who has seen either movie will already know how good an idea that is: the films’ strengths have always been their superb world-building, from the surrounding islands and sunlit skies to the stormy waters and hidden caverns, each new environment begging to be explored. Preferably on the back of a flying, flame-spouting lizard.

The TV show’s strength, meanwhile, is that it welcomes newcomers as much as it rewards old viewers. Race to the Edge follows its own standalone plot, set a year and a half before the second film and a few years after the second season. Even the return of crazed outlaw Dagur (David Faustino), who thinks he’s Hiccup’s brother, is easily understood by fresh eyes. Crucially, the dynamic between Hiccup and his loyal sidekick, Toothless, is as immediately endearing as ever: you don’t need to have read the novels or brushed up on your mythology to see that the pair are close friends.

That’s testament to the writing team behind the series – it’s not easy to continue characters and jokes, while still making them accessible – but also the cast. Jay Baruchel reprises his role as Hiccup, alongside his co-stars, such as America Ferrara as girlfriend Astrid, Christopher Mintz-Plasse as Fishlegs and T.J. Miller as Tuffnut.

The familiarity they have with their roles allows not only the trust between them to ring true, but also the humour: DreamWorks’ Dragons stories have also verged on the dark side, with death, peril and scorching hot infernos always on the cards, but the gag-filled scripts keep things impressively light.

When Tuffnut is convinced he’s seen something terrifying, he tries to relate it to the others. “Huge, massive…” he begins, then pauses. “What’s another word?” “Colossal,” offers Snotlout, without missing a beat. It’s a typically fast-paced exchange, the kind of hyperactive joke-stuffing that can seem forced when delivered badly.

Even the replacement of Gerard Butler and Craig Ferguson with Nolan North and Chris Edgerly – as Hiccup’s manly father, Stoick, and second-in-command Gobber – don’t distract too much, thanks to a neat line in visual slapstick, as the clueless deputy tries to replace the local healer, injuring most patients in the progress.

The animation is just as impressive, partly thanks to smart (no doubt budget-related) decision to reduce the numbers of dragons on screen. The ones we do get to see are therefore all the prettier, from the gigantic Snow Wraith to the even bigger (and yet ingeniously smaller) Night Terror.

The backdrops are all so immersive that it’s easy to forget the overall narrative: the basic framework sees Hiccup and the gang track down the Dragon Eye, a mysterious new object that projects a map of unknown lands onto the wall – and, conveniently enough, resembles something your child could well be admiring on a toy shop shelf by Christmas. Some set-ups, such as the beginning two-parter, hinge on cliffhangers that can easily be solved by the fact that the characters are riding dragons, but there is much for young viewers to enjoy.

How to Train Your Dragon has always placed an emphasis on depth as well as diversion, so with a longer runtime at their disposal, you might expect the writers to seize upon the chance to develop our lead characters. That never really happens, judging by the first four instalments, but Race to the Edge compensates by keeping the focus on the real stars of the show: the dragons. The show is structured into mini-arcs, each one introducing another couple of beasts to the magnificent line-up (one called Deathsong, which screams lethal sonic waves, is a highlight). With no sign of the imaginative creature design running out of fuel, the prospect of 13 episodes in total is, unlike DreamWorks’ other Netflix series, rather promising. Dragons are cool. And no amount of spinning off – no matter how commercialised – can change that.

Dragons: Race to the Edge is available on Netflix UK, as part of an £8.99 monthly subscription.

Hannah Gadsby returns to Netflix with Douglas... May 14, 2019 | Staff Reporter 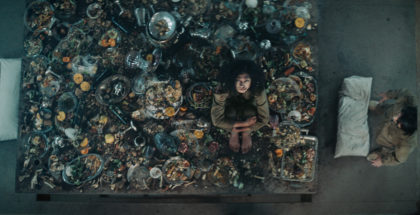