Monster Movie Monday: King Cobra (1999) | Where to watch online in UK | How to stream legally | When it is available on digital | VODzilla.co

A giant snake puts the bite on a small town in this cheap and cheerful knock-off of Anaconda.

In the mood for a creature feature? Amazon Prime has a veritable menagerie of monster movies, so we’re working our way through them, one killer beastie at a time. Welcome to Monster Movie Mondays.

Although the makers of King Cobra claim that their film was conceived before the 1997 release of Anaconda, it seems highly likely that the success of that film would have played a significant part in getting King Cobra to the screen. The small screen, that is – it was released direct-to-video in 1999. That’s probably just as well, since its flaws are glaring enough without being amplified to the size of a cinema screen.

The plot is fairly basic creature feature material. A scientific experiment goes horribly wrong, causing an already aggressive giant snake – a genetically engineered hybrid of an Asian King Cobra and an Eastern Diamondback Rattlesnake – to escape captivity. Two years later (hilariously, the film gives no indication of how the massive snake remained undetected in the meantime) the slippery beastie slithers into the small brewery town of Fillmore, just as they’re about to begin their annual beer festival.

As residents of the town getting picked off by a 30-foot snake that somehow proves remarkably adept at hiding, it falls to Doctor Brad Kagen (co-writer-director-producer Scott Hillenbrand) and his Police Chief girlfriend Jo Biddle (Casey Fallo) to try and persuade Jo’s father, Mayor Biddle (Hoyt Axton), to halt the festival before more people get eaten. Fortunately, help is at hand in the shape of herpetologist-slash-snake-hunter Nick “Hash” Hashimoto (The Karate Kid’s Pat Morita, graduating to actual cobras after taking down Cobra Kai).

It’s fair to say that the budgetary limitations on King Cobra are immediately apparent. Fair play to the Hillenbrands (Scott and co-writer-producer-director David) for not going down the dodgy CGI route, but that does mean that their featured creature just consists of a giant, obviously plastic snake head with retractable fangs and a jaw that moves up and down.

That also means it has just one facial expression (to be fair, it can narrow its eyes quite effectively), but that still means it’s more expressive than the cast, who are uniformly terrible actors, Morita excepted. In one particularly hilarious moment, the snake is doing something horrible to someone and the camera cuts between no less than four supposedly horrified cast members and not one of them can muster an expression that says anything other than “blank faced boredom”.

There are other uninitentionally hilarious bits too, such as the revelation that the snake somehow knows to puncture a car’s tyres to stop its intended victims from escaping. However, the film’s undisputed high point – which is almost enough to make the entire film worth seeing on its own – is a thoroughly delightful flying “cobra kick” move that Brad pulls off in order to save an about-to-be-eaten Jo in the final reel. He has a run-up and everything – it’s glorious.

Other than that, the film wastes a golden opportunity by having Morita face off against the cobra, but not having him riff on The Karate Kid in any way at all. Seriously, why cast Mr Miyagi, if you’re not going to lean into it? He doesn’t even get to do the accent.

However, the film’s biggest problem – almost certainly the result of budgetary issues – is that despite the set-up, the damn thing doesn’t even come close to attacking the town. The nearest it gets is a bit of woodland where it knocks off two scantily-clad “teenagers” and a bunch of trigger-happy cops. Either way, the film is crying out for a scene where a crowd full of beered-up festival-goers run screaming from a giant snake and said sequence is conspicuous by its absence.

As a final note of weirdness, the credits for the film boast of a special appearance by one Erik Estrada, formerly of Chips fame. In the event, he’s in just one scene, camping it up to high heaven in a borderline offensive portrayal of a homosexual beer festival enthusiast. He doesn’t even get eaten! Poor show, Hillenbrands.

Trailer: Pennyworth will return for Season 2 in February 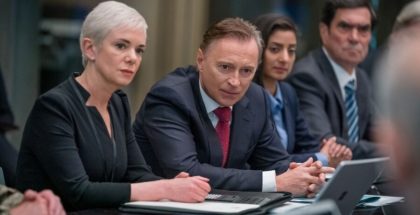 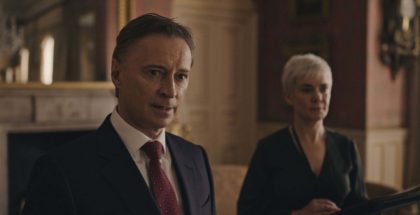