FrightFest 2021 film review: Mystery Spot | Where to watch online in UK | How to stream legally | VODzilla.co

Mel House's mystery mixes a motel, mourning and metempsychosis, as lost souls check in to audition for the afterlife.

This film is playing in person at FrightFest 2021 in August – and will stream online as part of the festival’s digital event in September. For more details on the online line-up and how to watch, click here.

There is a motel in the middle of nowhere. It once boasted the “Mystery Spot”, drawing visitors from all around with its array of optical illusions and “funhouse tricks to lighten people’s wallets”, but the guests have stopped coming since a fire left this roadside attraction in disrepair. Now, the motel is a halfway house with a very small number of semi-permanent residents. These include: Max (Lyle Kanouse), the manager, who keeps the urn for his departed husband, Rick, in the office and yearns to share his bed with someone again; Nathan (Graham Skipper), who pines for his estranged daughter Anna after separating from his wife; Leon (Bobby Simpson II), a police officer who is not so much staying at the motel as staking it out from the front seat of his car in an endless, obsessive investigation; and newcomer Rachel (Lisa Wilcox), so grief-stricken that we first see her, before she checks in, walking fully dressed into the ocean, evidently in a suicide attempt. A regular stream of people also come to Nathan’s room to record movie audition tapes that he then sends on to his producer boss by old-school post, rather than uploading them online – but these vulnerable hopefuls are in and out quickly, before moving on and never coming back. The exception is Emma (Rachel Logue), who shows up more than once with a gun, a score to settle and a mystery to solve.

Mystery Spot lives up to its title, associating the spiritual rituals of transition with a particular location, both earthily banal and uncannily surreal. Viewers may be quick to congratulate themselves for recognising this motel and its faded surrounds as a kind of limbo where lost souls surrender themselves to the dust of reassuring delusion or pass on to a better place. Yet it is the precise mechanics of this rest stop’s operation that prove elusive, ensuring that this latest feature from writer/director/editor Mel House remains enigmatic, long after its affiliations with not just Herk Harvey’s Carnival of Souls but also Hirokazu Koreeda’s After Life have been established. Even at night, the motel’s four residents are not alone, but joined by those whom they have loved and lost. Yet these projections of their desire and guilt make for unusual ghosts, in that they embody people who, although certainly absent, are not in every case dead – while even the living people whom they haunt already themselves seem to be stuck on the threshold of death, with one foot in the grave.

As reclusive Nathan and damaged Rachel strike up a friendship that leads the self-tormenting woman to deliver an intense personal confession of her troubles before the filmmaker’s camera, Mystery Spot invites us to see its very cinematic form as a conduit for a cathartic unburdening of sorrow. And when the two of them record themselves performing together a romantic audition script that Nathan has received for someone else, we begin to see these audition tapes as a process of transference, impersonation, even metempsychosis, enabling participants to play-act being somebody else, maybe even somebody less lonely.

These are strange meta-cinematic moments, as ultimately the magical mystery spot proves to be a theatrical space where you either choose to check out early, or stay till the end, transformed by what you vicariously experience and imagine there. The mystery itself, though, is life, death and everything in between. House’s film offers ample accommodation and overnight entertainments to everyone just passing through.

Raymond and Ray: Ewan McGregor and Ethan Hawke to star in Apple film 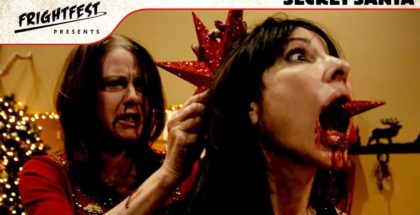