First look Walter Presents TV review: Fugitives (Profugos) | Where to watch online in UK | How to stream legally | When it is available on digital | VODzilla.co

These days, all the cool people want to work in TV. From David Fincher to Steven Soderbergh, if you’re a top director, you’ve got a series on your CV. Pablo Larrain, Oscar-nominated director of Jackie and the genius behind No and The Club, was doing TV before it was cool. Way back in 2011, to be exact, when he made Fugitives (Profugos), HBO Latin’s first Chilean TV series. And it’s every bit as gripping as you’d expect.

The show begins with a bang, as we jump straight into the aftermath of a drug deal gone wrong – and then, in the kind of bold leap that we now expect from TV shows in 2017, we rewind 72 hours to find out what exactly happened.

In the car? Four men, all of whom have been hired by a cartel to take some coke from Bolivia to Chile. There’s
Salamanca (Francisco Reyes), a 52-year-old mercenary who’s hoping to raise some dosh for his family. There’s Moreno (Luis Gnecco), a 47-year-old mercenary who’s worked with the cartel before. There’s Alvaro (Benjamin Vicuña), the youngest of the group. And there’s Vicente, a 35-year-old vet who just so happens to be the son of Kika, the matriarch in charge of the Ferragut family cartel (Claudia Di Girolamo). She’s not in the car – she’s in prison – but that doesn’t stop her from effectively grabbing the steering wheel and controlling the whole operation.

We follow them as they pick up the drugs and prepare to ferry them across the border, driving a gigantic tanker as if it’s got harmless petroleum inside. But petroleum’s explosive stuff, and it’s only a matter of time before Chekhov’s flammable truck bursts into flame. When it does, it’s accompanied by an eruption of violence, as bullets whizz across the screen and people take hits on both sides. Even in the first hour, Fugitives makes it clear that it knows how to deliver on the action front: by the time we circle back to the opening getaway, Larrain shoots the car chase like a Hollywood audition, full of bone-crunching collisions, bleeding wounds and rickety tumbles down stairs that make you feel every scrape.

Visually, even in an age where we’re used to superior 4K picture quality is now 4K, Fugitives thrills with its composition, from close-ups of the increasingly frantic four men to the gorgeous montage of their truck crossing Chile’s beautiful landscape, accompanied by some stylish maps and graphics to depict their journey. But it’s the handling of the human drama that really puts the foot on the gas: we already know that things are going to go wrong, and half of the fun is seeing the way that the quartet’s tension slowly rises to breaking point. By the time they’re pointing guns at each other in Episode 2, the tension is boiling over.

The script does a brilliant job of drip-feeding information about each one of them, without spilling the beans: even when we know their secrets, the others still don’t, leaving these strangers banding together out of necessity, rather than loyalty. Cantillana’s Vicent is enjoyably petulant and naive, as he wades into a situation beyond him with nothing but his family name on his side, while Gnecco’s Moreno is immediately intimidating, his imposing physical presence backed up by the first real violent act.

The show moves at a heck of a pace, wasting no time in uncovering new sides to its characters. One of them, for example, is swiftly revealed to be an undercover cop, but that fact isn’t shared with the rest of the characters for some time, leaving them to take morally tough steps to maintain that cover. Behind the police sirens, Marcelo Alonso is enjoyably ruthless as police narcotics chief Marcos Oliva, but his undercover man’s actions carry consequences that trouble both of them. Similarly, Reyes’ Salamanca is the one given authority by Kika, and he carries himself with a tough resilience, but he gradually reveals a vulnerable side, as we’re introduced to his daughter – and, as the group discover that they’ve been set up, it’s apparent to everyone that their enemies are prepared to take advantage of any weak point they can find. But it’s also obvious that this group are willing to match their opponents blow for blow. Who are their pursuers? We still don’t know, and the promise of unmasking that unknown threat is as intriguing as any conspiracy from 2017. They, however, don’t have the one thing this does: Pablo Larrain. Years before he hit the global stage, and TV became cool, the Oscar-nominated director was operating at the top of his game, crafting a show that is universally entertaining but unmistakably Chilean.

Ambushes, escapes, kidnappings and revenge, the whole thing flies by with style and heavy servings of blood and bullets – if you think of cold Scandinavian drama when you think of foreign-language TV, this is welcome addition to Walter Presents’ fiery Latin line-up.

Fugitives Season 1 and 2 are available on All 4. 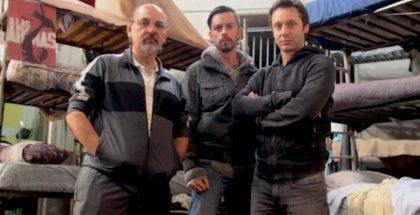