Of all the films to merit a TV spin-off, Limitless didn’t seem like the most obvious choice. It was a box office success, with $160 million worldwide – all the more impressive given its reportedly modest budget of $27 million – but it was forgotten swiftly. Perhaps that was because of the bigger, sillier film Lucy that followed, which had the same premise but went way, way further, or perhaps it’s because the film was singularly unremarkable. Yet as long as the myth that we only use 10% of our brains exists, so people will keep returning to that well of lies for story ideas. With Limitless the TV series, though, we finally have a piece of entertainment based on this idea that is neither as dull as Limitless the film or as bonkers as a movie that ends with travelling through time and giving sentience to humanity.

The good news is that the first couple of episodes of the Limitless series are bags of fun, with the potential for a comedy-crime combo in the vein of Monk or Sherlock. While there are warning signs or indications that it could go downhill, if it follows the wrong route, the first two episodes are strong, light-hearted and a good deal better than the film it’s riffing on.

The introduction to the show is largely concerned with setting up an ongoing structure of mystery-of-the-week combined with one or two overarching strands that pertain to the questions surrounding NZT – the magic drug – and what Bradley Cooper’s character from the film has to do with it all. In the pilot, underachieving wannabe musician Brian Finch is given one pill that allows him to access all of his brain. By taking it, he gains almost supernatural abilities to work out train speeds on sight, run between fast-moving traffic and do filing really quickly. Before long, however, he’s embroiled in a murder case and working with the FBI on complex issues.

Part of the appeal of this set-up is Jake McDorman in the lead role, managing to be far more successful at effortless charm than Cooper ever was. There’s a near-permanent narration that would be far wittier were it not so constant, but it serves to give us an insight into the busy mind of a man whose brain is constantly on. His chemistry with Jennifer Carpenter – playing his handler at the FBI – is sparky and, as yet, undeveloped; this will be far more successful, if it remains a professional relationship, not a romantic one. The Sherlock comparison earlier wasn’t arbitrary, as when Finch is on NZT, he shares the same disregard for social etiquette as Cumberbatch’s iteration of Conan Doyle. Refreshingly, however, Carpenter’s Rebecca Harris is no Watson – she’s a capable, switched on presence, often a step ahead of Finch.

Another way it lifts from the BBC series is in flashy representations of Finch’s thought process. Whether it’s graphics to show the neurons firing in a brain, or multiple Finches walking and talking with each other, Limitless strives really hard to make deduction look sexy. Sometimes this doesn’t work at all, such as when really simple logic about a dividing wall is represented with complex mathematical formulae, but elsewhere the gimmick is used well, such as when lip reading is depicted with comic book speech bubbles. How they’ll keep it fresh over the course of 22 episodes remains to be seen, but when your key theme is that the potential of the brain is limitless, hopefully your visual ideas are, too.

It’s really not a perfect start. It’s no spoiler to say that Bradley Cooper turns up for one scene in the pilot, establishing a shady relationship that will presumably have ramifications well into the season. Yet although he doesn’t appear in the second episode, they flash back to this one scene on around five separate occasions. The FBI case also has a ludicrously contrived resolution that’s half fun, half hokey. Yet the tone throughout is snappy, fast-moving and funny – one particular highlight is a sequence where he travels by map and sorts out the relationship problems of the people riding the bus. The set-up is ripe with comic and dramatic potential for a series that will never have the dramatic heft of Sky’s big-hitting American imports, but might be more fun than any of them.

Limitless: Season 1 is available on Netflix UK, as part of an £8.99 monthly subscription. 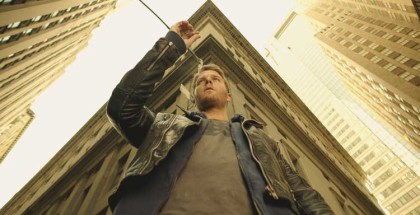