First Look Netflix TV review: BoJack Horseman Season 3 | Where to watch online in UK | How to stream legally | When it is available on digital | VODzilla.co 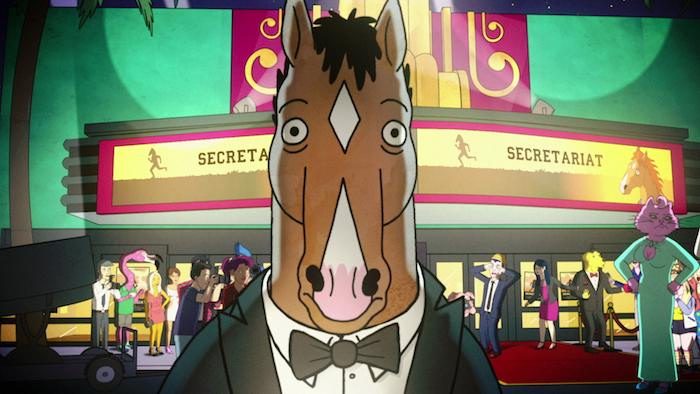 The world is bleak and empty

There are few television shows around at the moment as tonally complex as Bojack Horseman. In the penultimate episode of Season 2, our equine protagonist almost commits statutory rape with his old friend’s daughter. At the same time, another character, Todd, was part of an improv-cult on a cruise ship in one of the series’ more surreal subplots. The show happily veered between these two thematically incongruous storylines and, by this point, it became clear that Bojack Horseman was not, entirely, a comedy. Instead, it is a show that veers between outrageous, spit-take jokes, absurdist humour and some truly dark and emotionally nuanced character beats.

Season 3 doesn’t let up on any of these elements – there are jokes here that will make you choke at the audacity of the writers, while it also has some of the usual surrealism that fans have come to expect from the world, which is populated by anthropomorphised animals. And still, coursing through the lifeblood of the show, is a relentlessly bleak darkness that lingers within each of its creatures. Bojack is now on the Oscar trail, his film is a hit and this season uses that apparent success to pushes Bojack and his friends to the most extreme places possible, practically daring the audience to start hating them. It is almost confrontational how dark and upsetting the show can get, but it always follows it up with a joke or a moment of bizarre background detail.

The problem that emerges in this third season, however, is that even this emotional complexity can come to feel a little too familiar. While on the press tour, Bojack is asked, “What’s next?” Bojack responds in a typical fashion: “I don’t know, why does everyone keep asking that? Why does there always have to be a next?” It’s a sentiment that forms the core of the show as a whole, which is all about Bojack trying to work out what he wants from life and who he wants to be. This existential malaise can grow wearisome, especially when the show starts to hit familiar rhythms – you come to expect every episode to end with a depressing emotional revelation as a kind of grotesque punchline.

In spite of that, there are still emotional riches to mine from these themes. Recently, Terrence Malick’s Knight of Cups attempted and failed to study to the angst and emptiness of life in Hollywoo
, but it amounted to nothing more than Christian Bale loping after attractive women on grey beaches. Bojack portrays the same themes with far more incisive wit and much greater depth. The shallow silliness of the film industry is exposed hilariously – film critics will undoubtedly chuckle at the familiar junkets that Bojack has to sit through. Beyond the relentless, hilarious jokes (including a wonderful dig at Bradley Cooper) it continually probes at something deeper in this lifestyle and repeatedly returns wanting. So even if the middle of the series begins to sag with the weight of Bojack’s wearying sadness, by the end the emotional beats begin to land once more. The final shot of the season is truly moving, perhaps the most profound moment of the show so far.

While much of Season 3 is par for the course, it does excel in two key areas.

Firstly, it fleshes out the secondary cast even more. The jokes and dramatic moments land so effectively because of the audience’s affection for every character, an affection that has been hard-earned over the previous two seasons. In this season, everyone feels like they have inner lives – Princess Carolyn and Diane are undergoing similar crises to Bojack, albeit expressing it in different ways, while even Todd evolves from the goofy guy with side adventures into someone with a past and emotional needs (although his side adventures are still a regularly funny highlight). Even new, very minor characters, such as Carolyn’s bearded assistant, Judah, hint at rich, interesting lives that aren’t shown on screen.

Secondly, this is a more formally daring series than either of the first two. After the worst episode in the series – a detective thriller that feels too forced and wacky, struggling to fit properly in the world of Bojack – the best one happens. The entire instalment takes place underwater and to say any more would be to give away one of the show’s greatest treats, except to say that it is formally thrilling, unusually beautiful and motivated entirely by character. It’s Bojack at its best. Elsewhere, in other episodes, there are flashbacks-within-flashbacks, time-jumps and jokes set up over 10 episodes in advance. It’s clever, sharp writing and still one of the most consistently funny shows on TV – especially since Community is over (spot a great reference to Luis Guzman). It’s also not averse to total silliness and for any fans of Hank Hippopopalous’ hip-hop hypothesis, there are some equally adept bits of wordplay scattered throughout the season.

Sometimes the humour goes too far. After jokes about 9/11 and cancer in Season 2, it became clear that just about anything was fair game for this animation, which occasionally makes South Park seem as tame as Dora the Explorer. When the capacity to offend is so broad and integral to the humour of the season, it should be unsurprising when the writers finally hit a topic that you react to strongly. An episode about abortion features a song so startling and treats a sensitive topic with such a blasé attitude that the result episode is a little nauseating. That said, Bojack is never shocking for the sake of it and there is the strong chance that the show is one step ahead of you, anticipating your offence and saying something far more intelligent than you realise, because you’re too busy being offended.

Bojack Horseman’s third season is still as funny and emotionally devastating as the first two. Few shows on air at the moment can match it for the extent and depth of feeling, or the intelligence and hilarity of its jokes. It’s a show with a social conscience, is unafraid to make its characters the bad guys and is packed with visual and verbal gags. While the third season does stumble in a couple of places and lags in pace elsewhere, it’s still one of the best comedies on television. It could just be one of the best dramas, too.

All episodes of BoJack Horseman Season 3 are available to watch on Netflix UK, as part of an £9.99 monthly subscription.