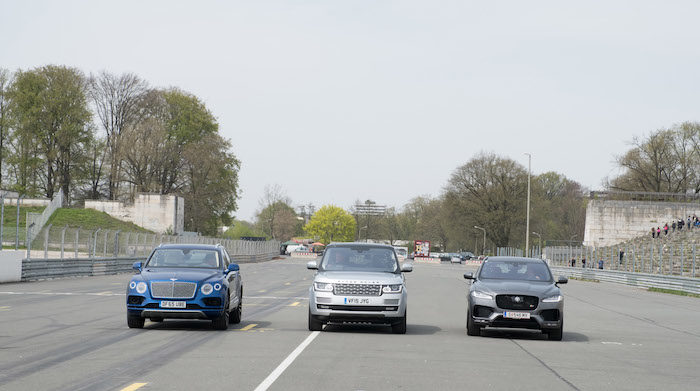 The Grand Tour nears the end of its first season with this penultimate outing – and proves there’s still some juice left in the engine.

Amazon’s motoring show has been far from a smooth ride so far, with uneven episodes stacking up to form an increasingly tedious queue of the same old thing. Controversial opinion, pretty shot of a car, overblown stunt, staged discussion, rinse and repeat. By the time Episode 11 took us back to Top Gear-era basics, the novelty had worn off so much that even the simplest of outings seemed stale. Episode 12, though, is a surprising reminder that Jeremy Clarkson, Richard Hammond and James May can still make you chuckle.

The SUVs themselves – a Jaguar F-Pace, Bentley Bentayga and Range Rover – are hardly the most interesting vehicles in the world, but the childish film climaxes with a solidly entertaining race, with the Range Rover’s off-road capabilities being put to excellent use. Even the puns about a “Nuremberg rally” and “Nuremberg trials” are so awful they’re fun.

Other bits are less impressive, from Richard Hammond’s claims to believe the Loch Ness monster (yes, they’re still in Scotland) to Tim Burton appearing on Celebrity Brain Crash. But there are little bits of genuine laughter tucked away throughout the hour. A launch control gag, for example, that sees a Porsche interrupt everyday scenarios with loud engine noises is silly and all the better for being brief – a sign that The Grand Tour can do things well when it’s not afraid of discipline.

The highlight, though, is Jeremy Clarkson testing a Lexus GS F on the Eboladrome, a ride that he argues proves that the 5-litre V8 (naturally aspirated) engine is actually bad for the environment. Just to demonstrate that beyond all doubt, the production team line the track with dummies of polar bears keeping over and rain down fake pigeons from the sky in the car’s wake. At one point, an artificial fox bursts into flame – a sight that’s as unexpected as it is hilarious. It’s novel, it serves a purpose and it’s over in a matter of minutes. It’s in these moments, when The Grand Tour is sending up its own outrageousness without descending into indulgence, that you can see why Amazon spent all that money on their motoring show. If only they did this six episodes sooner. 12 episodes in, the question now is what on earth the finale will hold in store, as The Grand Tour races to Dubai…

The Grand Tour is available exclusively on Amazon Prime Video, as part of a £5.99 monthly subscription – or as part of £79 annual Amazon Prime membership. New episodes arrive at 00.01GMT every Friday for 12 weeks, starting 18th November 2016. For more on how to watch The Ground Tour, click here.