Amazon Prime Video TV review: Crisis in Six Scenes | Where to watch online in UK | How to stream legally | VODzilla.co

Less a crisis, more a case of mild panic.

They’re called “auteur sitcoms”, laconic half-hour vignettes driven by a singular artistic sensibility, reflecting the idiosyncratic worldview of its creator. Judging by current trends, the auteur in question tends to be either the kind of emerging B-lister you’ll recognise from supporting roles in bigger shows (Aziz Ansari, Donald Glover), or an experienced industry veteran plucked from the side-lines (Larry David). Sometimes, they’ll even let people with vaginas have a go (Lena Dunham) and – particularly if you live in the UK – they might showcase an invigorating new voice (Fleabag’s Phoebe Waller-Bridge, or Chewing Gum’s Michaela Coel).

Amazon’s new auteur sitcom is Crisis in Six Scenes, the first-ever television series from Woody Allen. It represents something of an anomaly for the sub-genre, given that it’s written, directed and performed by an actual auteur (if such a thing genuinely exists). Alas, the project is a disappointment, providing that it’s possible for a new Woody Allen project to disappoint in 2016. A rather mahogany effort, Crisis in Six Scenes is straight-grained and cumbersome, like a clapped-out, antique sideboard, and almost as wooden. Tonally, we’re in the realms of Scoop and Small Time Crooks, so set your expectations accordingly.

Aficionados hoping that the director’s transition to the small screen will result in some miraculous return to peak form will be frustrated. Indeed, you have to wonder whether Allen is concerned with any of this VOD jive at all. There’s a gag about the questionable artistic value of television in the very first scene, and in a recent interview to promote the show’s release, the director said that “it has the merciful quality of being short”. He’s not wrong. Each episode lasts just 23 minutes, but the elongation is palpable. With this latest project, he doesn’t really take the money and run, as much as he takes the money and saunters along at an elderly pace.

Describing the plot of Crisis in Six Scenes is not easy, to the extent there isn’t very much of one – at least, not in the three episodes provided for review purposes. In keeping with the effort expended on Allen’s more recent big screen outings, like Irrational Man or Magic in the Moonlight, the show feels like a rough draft. There are tendrils of comic excitement, but nothing really sprouts.

The first episode opens in familiar Allen style, with the director’s preferred white Windsor credits overlaid onto a plain black background, though instead of a jaunty piece of introductory jazz, the soundtrack is the Jefferson Airplane song, Volunteers. We’re slap bang in the middle of Sixties America, and the ensuing montage of vintage news reel footage rams the point home.

Allen plays Sidney Munsinger, a neurotic copywriter with average talent and lofty literary intentions. His wife is relationship counsellor Kay Munsinger, played with gusto by comedy legend Elaine May. In the first episode, Sid gets a haircut, Kay hosts a book club, the two of them bicker about politics, and a young couple plan for their impending nuptials by getting therapy. The chapter concludes with a cliff-hanger, of sorts, but in general, narrative momentum is noticeable by its absence. Allen’s performance is fine. He regurgitates the same shtick he’s been peddling for years now, but he’s an adequate foil for the agreeably caustic May. The two of them make for an entertaining couple, and they’re enjoyable company, even when the actual story grinds to a halt.

Things perk up in Episode 2 – the second “scene” – with the arrival of Miley Cyrus as Lennie Dale, the daughter of a family who looked after Kay as a child. Lennie is a revolutionary and an outlaw, on the run from the police, following an audacious prison break. After arguing it out with Kay, Sid reluctantly consents to Lennie hiding out in their unreasonably fancy New York townhouse. Mild farce ensues, as Sid and Kay shield Lennie from the prying eyes of police officers, who show up investigating a burglary. Cyrus is terrific here as the privileged middle-class girl gone wild. She manages to break free from the listlessness of the material, injecting her scenes with moxie and glamour, like she floated in from an entirely different, much more radical show. Her presence energises the piece.

Visually speaking, Crisis in Six Scenes is a let-down, especially coming straight after Allen’s luxuriously realised Café Society. The locations are lush and detailed, but the camerawork is lackadaisical and stilted. Allen’s boredom is tangible. He completely gives into the imaginary confines of television drama, shooting everything in the middle distance. From time to time, the camera will even move (there’s a quaint whip pan in Episode 3 that comes perilously close to visual storytelling) but when it does, you half expect it to bump into the furniture. Sure, it looks like television, but it looks like television from the Sixties or Seventies. When Louis CK made his own VOD series, Horace and Pete, he made a very specific aesthetic choice to position it as a washed-out, over-lit, retro TV play. There’s a sense Allen is perhaps looking for a similar result here, but there’s little of Louis CK’s cleverness or passion: he’s going through the motions.

The final moments of the third episode show an inkling of the comedic potential for the remainder of the series, but a big question mark, too: will casual viewers make it this far? Six scenes might not seem like a lot, but in terms of actual ideas, they’re such small portions compared with the modern visions of hipper shows like Girls, Master of None and Transparent. Allen should be applauded for trying something new, but did he really have to make it feel so old?

Crisis in Six Scenes is available from Friday 30th September exclusively on Amazon Prime Video, as part of a £5.99 monthly subscription. 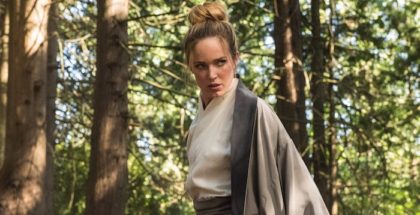 Ride Upon the Storm: A thundering exploration of family and faith... January 27, 2019 | Ivan Radford