Netflix UK film review: Happy Feet 2 | VODzilla.co | Where to watch online in UK | How to stream

This underwhelming sequel winds up closer to Unhappy Feet.

It’s hard to believe that a movie about singing penguins could be so unloveable. After cooing over David Attenborough on Netflix, this sequel – remember, the first one won an Oscar – seems like the perfect addition for rival Amazon Prime Instant Video. But after 20 minutes of singing, tapping and nonsensical storytelling, you soon give up on the adorable little animals and pray for a leopard seal to come along and kill them all.

Mumble (Wood) is back, tip-tapping his toes across the Antarctic and trying to please his wife, Gloria (Pink). In case he doesn’t already have enough to be neurotic about, he’s a dad now too. And little Erik (Acres) doesn’t do dancing. Or singing. He wants to be different – because that’s how kids in films learn life lessons about believing in themselves.

Running away from the pack, Erik comes across Sven (Azaria). He looks like a puffin. He acts like a puffin. And he talks like a Swedish person. So, of course, when he says he’s a penguin, everyone believes him. Even when he starts to fly.

Can Erik learn to fly too? Will anyone expose Sven’s true identity?

Rather than answer those questions, Happy Feet 2 goes off to talk about global warming. You see, the Antarctic ice sheet is melting. And as the ground shakes, cracks and falls into the sea, the clan of Emperor penguins end up trapped in a massive hole, unable to get out. Only Erik and Mumble can save the day, helped by the two characters voiced by Robin Williams (Ramon, who has a silly voice, and Lovelace, who has a silly jumper).

Will the penguins survive? How can they get fish from the sea into the mainland to feed their families? And will social outcast Ramon get off with the hot girl in the pack?

Rather than answer any of these other questions, George Miller (director of Mad Max Beyond Thunderdome and Babe: Pig in the City) whisks us underwater to look at some krill. Not just any krill. These are krill voiced by Matt Damon and Brad Pitt. Bantering their way through their comedy subplot, Will and Bill use puns like “one in a krillion” and decide to flee the herd to become predators. “I’m going to chew on something that has a face!” shouts Pitt.

They’re almost entertaining – but they don’t belong in this film. In fact, if they had their own separate film instead of this drivel, the world would be a better place.

The script runs in three different directions for 100 minutes, none of it adding up to anything fun. The characters are so shallow they make Mr. Popper’s Penguins look like a literary masterpiece (at least at it had alliteration in it). The animals and landscapes are amazing works of CGI, but you won’t give two bird poops about any of it. You’ll spend more time trying to work out if the humans who turn up halfway through are live-action actors or an impressive bit of motion capture. (Whichever it is, they look incredible.)

Of course, looks aren’t everything, as Erik soon discovers. Or does he learn that singing is everything? Or that penguins can fly? Or that krill are people too? Or that Swedish people shouldn’t be trusted? Or that £87 million is a stupid amount to spend on a sequel about singing penguins?

There actually is a lesson in here somewhere. It’s this: don’t see Happy Feet 2.

It’s a sad thing to say about cute, fluffy penguins, but a shrill, ear-molesting rendition of Puccini’s E Lucevan Le Stelle by a flightless bird isn’t going to change that. That kind of thing would never happen on Attenborough.

Happy Feet Two is available on Netflix UK, as part of an £8.99 monthly subscription.

Where can I buy or rent Happy Feet Two online in the UK?

Interview: Rhys Darby (What We Do in the Shadows) 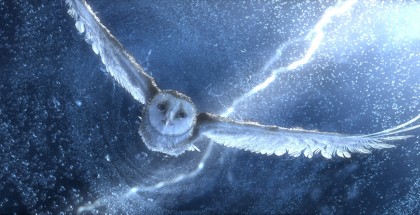