VOD film review: Shaun the Sheep: The Movie | Where to watch online in UK | How to stream legally | When it is available on digital | VODzilla.co

Shaun the Sheep's feature-length outing is a perfectly contained piece of entertainment that mines each frame for every possible laugh.

Is there an institution more British than Aardman? The royalty doesn’t quite claim that title, because the claymation studio responsible for Wallace and Gromit has a much broader appeal, delighting people of every generation and class, and somehow representing them as well, in a strange kind of way. Their latest hero, Shaun, was a secondary character in A Close Shave, but was so beloved that he ended up with his own popular TV show – itself spawning Timmy Time, for the younger kids. Shaun the Sheep the Movie is a spin-off from their flagship series. This isn’t a cynical cash-in, though, as there isn’t a cynical bone in the studio’s body. Aardman has a sunny outlook, the sharpest of wits and a genial, affable nature that feels a little like drinking a cup of tea while watching reruns of Porridge.

Shaun takes the herd of whimsical woollies to the big city, in order to find their farmer, who has lost his memory. It’s a classic sheep-out-of-water story, as the de facto leader tries to navigate the flock through dinners at posh restaurants, help them avoid Trumper, who is determined to lock them in a pound, and reunite them with their owner. It’s both a jape and a caper, a veritable escapade where each situation is thoroughly mined for every possible laugh. At 80 minutes, it zips by, making this a perfectly contained piece of entertainment, a humble gem that never draws attention to itself or its remarkable artistry. It is primarily concerned with telling a good story.

Which it does, and it does so well. The inspired choice – and one that is carried over from the TV series – is to rid the film entirely of dialogue. This means that the comedy is far more reminiscent of the silent era than any witty verbal exchanges you mind find in contemporary American animation. Not only is there heavy reliance on perfectly executed slapstick, but every detail is infused with humour. Directors Mark Burton and Richard Starzak make the most of the meticulous work put into every frame, filling it with sight gags and humorous side notes to make even the most gravelly-faced viewers chuckle. As with all Aardman films, it bears up to repeat viewing to spot the details you may have missed the first time.

The success is all thanks to the studio’s tried and tested, by now old-fashioned, method of animating, which involves taking 24 photos of carefully manoeuvred dolls or clay models to create one second of footage. It gives the whole film a wonderful, hand-made feel to it, but without it looking cheap or rushed at any point. It’s an exquisitely formed film, with movement so smooth and sets so detailed you’ll probably never notice the monumental amounts of work that have gone into making it so great.

Shaun the Sheep: The Movie is available to watch online on Amazon Prime Video as part of a Prime membership or a £5.99 monthly subscription and on BBC iPlayer until 26th August 2019.

Where can I buy or rent Shaun the Sheep: The Movie online in the UK? 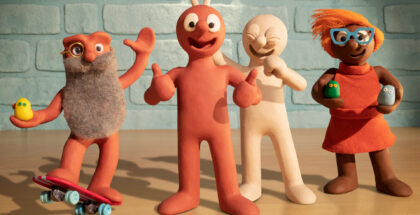