Amazon TV review: Ripper Street Season 3, Episode 8 (finale) | Where to watch online in UK | How to stream legally | When it is available on digital | VODzilla.co 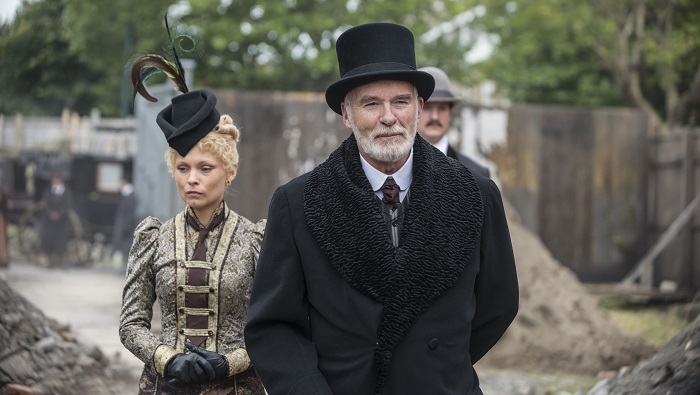 Warning: If you haven’t seen any of Season 3, this will contain spoilers.

And so, here we are: the end of the road for Ripper Street Season 3 – and, judging by Episode 8’s title, presumably for Edmund Reid too.

Amazon’s revival of Ripper Street following its cancellation has proven more than justified throughout this third season, which has not only shown there is life left in these London streets, but has also delivered the best run of episodes in the series to date.

While there have been standout individual stories, from the catastrophic opening train crash to last week’s gender-oriented tangles of sterilisation and society, Episode 1’s disaster set the show on rails towards a single destination: the ultimate peace of Inspector Reid. Since the discovery of his daughter being alive, Reid’s lurch into rage and back to calm purpose has toyed with two possible conclusions for the copper’s tale. Will he die? Or retire? Or perhaps, in some strange way, even both?

Richard Warlow’s writing team has been sure to give Matthew Macfadyen as much to play with as possible, the actor’s usually still face enjoying the chance to swing from retribution to resolution at alarming speed. Even when the about-turns of Reid’s journey have sometimes been a little dizzying, Macfadyen’s lead has been composed enough to convince.

Good old Uncle Bennett has also enjoyed his chance to step into centre stage, as the show has gradually nudged us towards the future promised by Drake’s return – when he was summoned to Whitechapel to take over the running of H Division. Jerome Flynn is like an antique teddy bear, rock hard but oddly adorable, and that combination (along with his new intellectual status following his post-brawling reform) has seen him steal the spotlight on a near weekly basis.

But the best – and arguably most surprising – asset of Ripper Street Season 3 has been Long Susan, who, in the hands of the writers and MyAnna Buring, has risen to become the series’ villain, as well as its most complex female character. And so it is only fitting that our final episode should take us right back to the first chapter, when we discovered that she was behind the railway heist all along. Who were those bearer bonds stolen from? The answer comes in the return of a man from her past – shipping magnate Theodore Swift.

Ian McElhinney tears up the scenery as the nasty rogue, shooting some people, shouting at others and complaining about indigestion like the world’s ham supply is about to run out. He’s great to watch, not just because he’s fun to boo, but because he changes the dynamic of the show entirely. Muscling in on Susan’s plans, he assumes the role of man of the (evil) house. The question of whether Susan would ever repent from her actions soon becomes whether she will go along with someone else’s.

It’s another layer to the puzzle box of Miss Hart, one that Captain Jackson has one hell of a time trying to solve. After all, we still haven’t found out what he plans to do with the fingerprints found on the gun that shot Reid. Will he set the Inspector on her? Or cover them up so he can play happy hubby? With an increasingly complex estranged wife to figure out, Adam Rothenberg’s slide between sympathetic bloke and sleazy drunkard remains as entertaining as ever.

But if complexity is what you’re after, Ripper Street’s main triumph, perhaps, is filling its background with such textured individuals as Fred Best. David Dawson’s journalist has become an increasingly important part of the story, moved by his bereavement from the wreck to fight the corruption behind it. His righteous determination – and endless digging of dirt, including meeting up with an on-the-run American colleague to secure some secret microfilm – matches the sacrificial zeal of our lead detective, but also keeps the narrative rooted in that unifying catastrophe; even as the show’s scope widens, each character’s fate, whether tragedy or triumph, feels tightly connected, which gives this finale a particularly strong emotional punch.

At the end of the day, Amazon’s resurrection of back Ripper Street was always an act designed to please the fans, so it’s only right that Season 3’s finale should tie up each loose end in paired precision – Rose and Bennett, Jackson and Susan, Swift and Best – to give its audience exactly what they want. It’s a carefully conceived balancing act, ensuring that if there are potential deaths, there are also hints of new life; if there are splits, there are glimpses of romantic union. At its heart, though, remains Reid and Mathilda, a daddy-daughter relationship that Warlow smartly parallels with Susan and Swift. Who will take after whom? And who will carry on their father’s name? As one dreams of violence and dark ends, the other longs for a sunlit dash along the beach.

Exclusive Offer: 20% off Into the Woods on Digital Theatre