VOD film review: Angels Sing | VODzilla.co | Where to watch online in UK | How to stream

When you sympathise more with the grouch than the people full of festive spirit, you know a Christmas film is doing something wrong.

“On the first day of Christmas, my true love gave to me… an ostrich in a belfry.” So begins Grandpa Walker (Kris Kristofferson) at the start of Angels Sing, his guitar in hand. The rest of the family burst out laughing. That’s the high point of this Christmas film – and even then, it’s not funny.

The movie stars Harry Connick Jr. as Michael, a guy who hates Christmas due to Sad Family Reasons – something that irks his wife (Britton) and son (Canterbury), who like to spend December 25th singing carols in groups with naff substitute lyrics. Equally as frustrating for the Walker clan is their lack of luck at house-hunting, as the trio try to find somewhere to live before the holidays.

But one morning, Michael stumbles across a beautiful property for sale. The owner? An old saintly man called Nick (ahem), who just so happens to look and sound a lot like Willie Nelson. He practically gives the house away to Michael under the condition that he promises to uphold the neighbourhood traditions – the kind of nonsensical plot device that probably makes sense to someone who hires Willie Nelson to play Father Christmas. Or to a singer who has spent a large part of their life smoking pot.

And so, the family move in – only to discover that the neighbourhood tradition involves putting up so many Christmas lights that Matt Damon could see their house from Mars. The whole street does it, you see. They’ve even been featured on the local news, something that becomes a problem when everyone realises that the Walker’s home is the only one on the street not joining in.

Will Michael’s heart thaw by the end of the film? There are no prizes for guessing the answer. The problem is the way it happens: Lou Berney’s script, based on an actual novel by Turk Pipkin, simply introduces another Sad Family Reason to cancel out the first one, a cheap, sentimental ploy to contrive a happy ending for the sake of it. Why should Michael love Christmas? Nobody ever explains. They just bully him about being a Scrooge while turning up on his doorstep with more lights to stick to his house – without even offering to help with the electricity bill. (When you sympathise more with the grouch than the characters full of seasonal spirit, you know a Christmas film is doing something wrong.)

Director Tim McCanlies, meanwhile, is clearly just stoked about having Willie Nelson and Kris Kristofferson together in the same film. That means that in between the scenes stuffed with schmaltz, we’re served a whole heap of festive tunes – in fact, it turns out that the street is full of bluegrass veterans, including Lyle Lovett, like some kind of creepy retirement village for old folk musicians. For some, that will be enough to make them jam Christmas puddings in their ears. Even for fans of country music, though, the songs are disappointing, either featuring bad attempts at joke words or, when they do sound pleasant, over too soon for us to enjoy them. The only exception is a full acoustic rendition of Amazing Grace by Nelson himself, but he’s the weird love child of a stoned Santa Claus and the angel Gabriel, so it’s anybody’s guess what that has to do with anything.

Would the film work better as a straight-out musical? Given Connick Jr.’s talent on the ivories – a grand piano sits in their home, but is curiously never used – you wish Angels Sing ditched some of its dreadful dialogue for a proper medley of ditties instead: given more screen-time, Lovett, Kristofferson and Nelson would make for a cracking concert, if not a good film. But this bizarre halfway house between folk fest and Hallmark channel cheese just winds up hitting wrong notes. By the time the forced finale finally arrives (featuring another humorously inappropriate animal), you’ll be so irritated you’ll be tempted to turn off all your lights too. On the first day of Christmas, give yourself an ostrich, a bat, a kangaroo – any excuse not to watch this. 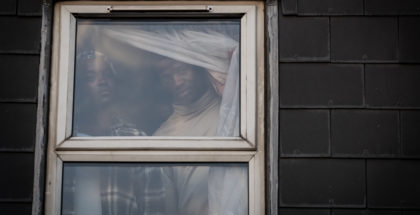