YouTube makes originals available for free | Where to watch online in UK | How to stream legally | When it is available on digital | VODzilla.co

YouTube is making several of its original series available to stream for free to give people more entertainment options during the coronavirus pandemic.

The video giant has been running its subscription service, YouTube Premium, for several years, originally keeping all of its original content behind a paywall. In the past year, it has switched strategy to move away from high-budget premium series or scripted drama towards titles more geared towards music or celebrities, such as its Justin Bieber documentary Seasons. It’s also changed the way it makes those available, with a selection of originals released free for a limited window – with adverts – in a move to entice people to stump up for a full Premium subscription. Now, it’s bringing out titles from behind its paywall – without ads.

Notably, Liza Koshy comedy Liza On Demand and Karate Kid sequel Cobra Kai, YouTube Premium’s two standout original shows, are not part of the initial wave of free titles, although YouTube will be releasing further titles in the coming weeks, including We Are Savvy, Hyperlinked, Fruit Ninja Frenzy Force and Kings of Atlantis.

The move follows a similar step by Apple TV+ to release originals for free, and by Amazon Prime Video, which has made a number of kids’ shows available for free.

Escape the Night
Host Joey Graceffa ventures into purgatory to rescue his friends, a revolving cast of YouTube. Created by Graceffa and produced by Brian Graden Media.

Impulse
Supernatural thriller from Universal Content Productions, Doug Liman’s Hypnotic and showrunner and executive producer Lauren LeFranc stars Maddie Hasson as a rebellious small-town teenager who discovers she has the ability to teleport — which makes her the focus of those who want to control her.

Sherwood
In this new animated spin on the Robin Hood legend, teen hacker Robin of Sherwood joins forces with a group of renegades to battle the elements of the flooded streets of 23rd century London to defeat the mad Sheriff of Nottingham.

Sideswiped
Comedy from creator and star Carly Craig (American Housewife) is about dating in the digital age — based on a true story. The series also stars Rosanna Arquette and Chelsea Frei.

The Sidemen Show
The seven Sidemen brave experiences in destinations across the globe as they strive to conquer the elements. Produced by Blue Ant Digital Studios in association with Antenna Pictures.

Me and My Grandma
Buddy comedy starring Eva Gutowski (aka MyLifeAsEva) and Rhea Perlman (Cheers).

We Are Savvy
Annie, Tehya, Sarah, and Spencer are BIG fans of the internet. So when the world of all things weird, wacky, and wonderful becomes WAY too irresistible, they combine their talents to start a cool YouTube Originals show called We Are Savvy! Filled with handy DIYs, interviews from the worlds of music, celebrity, technology, sports and fashion, and of course adorable cat videos, We Are Savvy is for everyone—from girly girls to tomboys.

Hyperlinked
Inspired by a true story, this YouTube Red Original Series follows the five stars of L2M as they come together to create their own website by girls for girls.

Fruit Ninja Frenzy Force
Four new Fruit Ninjas rise to rediscover the long lost art of Juice Jitsu. Their mission – to unlock hidden powers through the slicing of fruit and to protect their neighbours from bizarre villains they never knew existed.

Catch up TV review: The Steph Show, Joe Lycett’s Got Your Back, Coronavirus: How Clean Is Your House? 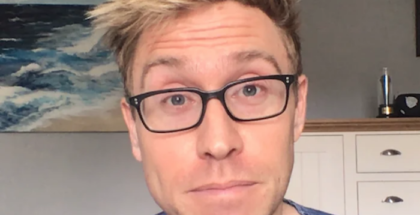