NBC officially cancels Constantine as fans fight to save it | VODzilla.co | Where to watch online in UK | How to stream

NBC officially cancels Constantine as fans fight to save it

NBC has officially cancelled Constantine. The show, based on the DC comic book series, follows con-man-magician-turned-occult-detective John Constantine, who defends the world (and, most of the time, his own skin) from forces of darkness. It stars Matt Ryan as Constantine, a perfect fit for the blond-haired, sarcastic Brit – much more so than Keanu Reeves in the far less impressive 2005 film adaptation.

Despite its faithfulness to the comic books, excellent cast, and a string of fantastic stories, though, NBC decided not to order any more episodes beyond the initial 13, which sparked fears that the programme would be dropped altogether.

Now, several months later, NBC has confirmed that it will not commission any more episodes, after it failed to build a big enough audience. Warner Bros. TV, though, who produce all of DC’s small-screen adaptations, are “working hard to find Constantine [a] new home”, Daniel Cerone announced on Twitter yesterday.

The co-creator of the series took to the social network to share the news, as well as kickstart the campaign to save the show. Fans have already been vocal about the programme since November’s decision not to continue the adaptation for a full first season, with one rumour of a possible move to Syfy ultimately proving false.

The show premiered in the UK exclusively on Amazon Prime, a decision that may have prevented it from gaining the kind of popularity that has been enjoyed by Gotham, which airs on Channel 5 here and has already been renewed for a second season. But Constantine has repeatedly appeared in Amazon’s most popular TV shows, while in the US, it has built a loyal following.

This diagram, tweeted by the show’s production designer, Dave Blass, highlights the audience that Constantine was drawing on NBC, higher than The Flash and Arrow on The CW, according to Nielsen’s 2014/2015 season ratings. While The CW places its superheroes front and centre, though, within the context of a larger network, the ratings were not good enough.

(The network will also not bring back About A Boy, a TV series based on the movie, Katherine Heigl’s State of Affairs, Marry Me, or One Big Happy.)

“Thanks to NBC for Season 1,” Cerone tweeted yesterday. “Got a nice call from the powers there. We were considered but they feel they had a strong development season.”

“Bear in mind, Constantine ratings low for NBC but would constitute a hit at many networks,” he added. “Fearless faith.”

In an era where shows have been resurrected in response to fan demand, there is still a chance that Constantine could get a second coming. Arrested Development and The Killing were both famously brought back to life by Netflix, while Amazon delivered Season 3 of Ripper Street last year, which is still to air on the BBC. (A similar campaign is also running for Utopia, after Channel 4 decided not to renew it for a third run.)

What can fans do to help?

“#Constantine fans are redefining what fan means,” he continued. “In this TV age fans have a voice. YOURS ARE BEING HEARD.”

Other stars have added their voices to the horde, with Matt Ryan’s friend and actor Joseph Morgan offering a guest cameo in response to a pick-up from any network.

#Constantine Pick up the show and I'll guest star #SaveConstantine

Stephen Amell of The CW’s Arrow also said he would guest star (if not as Oliver Queen, then presumably as someone or something else):

#SaveConstantine — Hey TV Networks / Netflix and the like… If you pick up the show, I'll guest star.

Finally, William Shatner joined the cry, aiming his offer directly at The CW and Netflix:

With Netflix already teaming up with Marvel for its Defenders series, The CW could be a more natural, DC-friendly home for Constantine. Or could Amazon stump up the cash and be its international backer?

“We intend to make something happen,” concluded Cerone. “Don’t blink.”

Joining the fight? Tweet #SaveConstantine. And, while not blinking, check out our spoiler-free reviews of Constantine Season 1 to pick an episode to stream.

How the Daredevil opening title sequence was made: An interview with director Patrick Clair 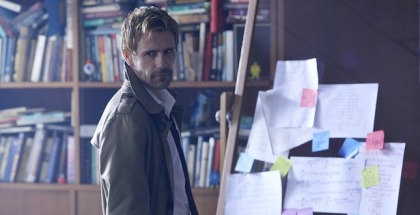