Gotham Season 4 to air on E4 this April | Where to watch online in UK | How to stream legally | When it is available on digital | VODzilla.co

Gotham Season 4 to air on E4 this April

E4 has acquired the rights to Gotham, with Season 4 set to air on UK TV in April.

The prequel series, based on the DC characters created by Bob Kane with Bill Finger and produced by Warner Bros. Television, is charts the rise of Commissioner Gordon (Ben McKenzie) from rookie detective to Gotham PD’s top brass, along with the efforts of Sean Pertwee’s Alfred – loyal butler to the Wayne family – to raise young master Bruce (David Mazouz) following the death of his parents.

The show was snapped up by Channel 5 initially, airing Season 1 and 2 on UK TV, albeit at a very long delay. Problems arose, though, and Channel 5 (for undisclosed reasons) were unable to air Season 3 as planned last autumn. As a result, fans had to wait until Netflix UK – which holds the global streaming rights to the show – released the whole season, alongside its eventualy DVD release.

Season 4, though, will not leave fans waiting so long, with E4 sending up the Bat-signal to bring the series to British screens within a matter of weeks.

While Gotham City fights for normalcy, a new hero will rise. After completing his training with Ra’s al Ghul (Alexander Siddig), a young Bruce Wayne (David Mazouz) begins to assume responsibility for the city’s well-being. With the help of his ever-faithful butler Alfred Pennyworth (Sean Pertwee) and quiet support of Lucius Fox (Chris Chalk), he will step into this role, all while building up his public persona of carefree socialite to avoid any suspicion among Gotham’s citizens.

Gotham premieres at 9pm on E4 on Tuesday 10th April, with new episodes airing weekly. In the meantime, you can catch up with the first three runs of the show on Netflix. 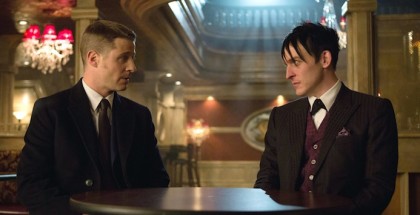