Eating In: BFI Player serves up free foodie collection | Where to watch online in UK | How to stream legally | VODzilla.co

Struggling to find culinary inspiration for dinner in the depth of your food cupboard or fridge? Look no further than the BFI’s latest online collection, Eating In, available to explore now for free on BFI Player.

From fine dining to comfort food this newly curated selection of films, drawn from the BFI National Archive and regional and national archive partners, brings together a feast of culinary delights to tickle your tastebuds as well as a chance to sample home cooking and simple local fayre from the length and breadth of the UK.

It spans almost a century of making, cooking and eating, from the gigantic appetite of Herbert Campbell as Little Bobby (1899) through to A Love Supreme (2000), a director’s sumptuous homage to his mother’s cooking. Nostalgic childhood favourites, regional delicacies and recipe tips for the thrifty are all at hand, whether you’re after artisan cheese, homemade samosas, a full turkey dinner or a sweet treat. This collection also reflects the challenge of feeding the nation during two world wars and how an increasingly multicultural society saw postwar Britain’s culinary landscape burst into colour charting our changing tastes and attitudes, introducing a more sophisticated and diverse palate into our daily lives, served up on our tables at home and dining out.

Here are some highlights from the menu:

A treat for cheese-lovers, this delectable short film produced by early film pioneer Charles Urban reveals the near-miraculous process by which curds are cut from whey and coagulated milk becomes Stilton.

Decades before Delia Smith and Jamie Oliver, celebrity chef Marcel Boulestin was on a mission to inspire Britain’s home cooks and popularise French cuisine. Here in this gas industry-sponsored film he makes a quick veal escalope with the aid of a shiny new gas cooker.

Surrealism, avant-garde sound montage, and irreverent wit might be the last thing you’d expect from a government-sponsored film about wartime cookery. But director, artist, animator Len Lye specialised in the unexpected. A simple tale of a mother cheering up her daughter with a pie from her rationing-stricken pantry is skilfully crafted into a charming work with real artistic depth.

Chef Moyra Babington meets Mr Kim Wong at The China Garden, the largest Chinese restaurant in Plymouth. Hakka or Cantonese cuisine was rising in popularity in the UK at this time, its braised meats, pickles, dumplings and seafood were a popular choice for diners, experiencing a stir-fried noodles boom.

With Britain’s entry into the Common Market on the horizon, 1972 was a good time to celebrate all the Midlands food we’d shortly be exporting. Tasting the plain, good ‘fittle’ of the Black Country this local news report offers samples of traditional delicacies such as black pudding, scratchings, faggots groaty pudding and chitterlings to local shoppers, all washed down with lashings of prize-winning Black Country beer.

Dorothy Sleightholme, Yorkshire’s answer to Fanny Cradock, makes a meal of turkey leftovers in this seasonal offering from the Farmhouse Kitchen which ran for almost 20 years on ITV from 1971 to 1990. Tired of turkey sandwiches? We get advice on how best to spruce up those straggly scraps with not one, not two, but seven gut-busting recipes, from vol-au-vents to pate, you can’t go wrong, it seems, with a dollop of cream and a dash of sherry.

Bringing the tastes of Montego Bay to a wintry West Bromwich. Far removed from the traditional Black Country fare of groaty pudding and grey peas, dishes on the menu show there is more to Caribbean cuisine than staples like rice and peas with a colourful feast from across the Caribbean including Jamaican Lobster Ochi Rios, Martinique Chicken Montique, Tobago Sole and Curried Prawns in Pineapple from Trinidad.

Nilesh Patel’s debut short is a sumptuous, hypnotic homage to his mother’s cooking, as he films her making samosas. Inspired by Raging Bull, it’s all shot on 35mm in black and white, the film was created as a tribute to the director’s mother, who suffers from rheumatoid arthritis, focusing on her hands and the traditional techniques handed down over generations.

The Tiger King and I: Netflix announces special after-show 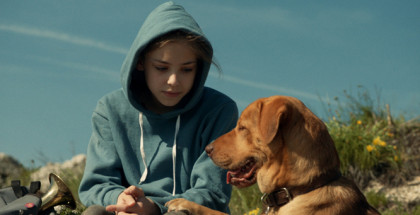 BFI Player: From launch to London Film Festival, what you need to know... October 2, 2013 | Ivan Radford