Amazon Prime Video app launches on Windows 10 | Where to watch online in UK | How to stream legally | When it is available on digital | VODzilla.co 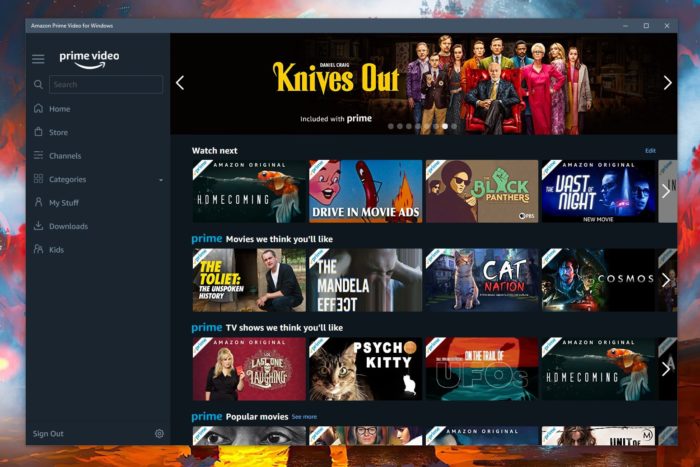 In the increasingly competitive streaming landscape, content remains the most important weapon in a VOD service’s arsenal. But availability and accessibility is the second most important – viewers, quite simply, can’t subscribe to your service if they can’t access it. And so, as Amazon fends off new competition from Disney+ as well as NOW, Netflix and others, it will come as some relief to the online giant that it has now launched an app in the Windows Store.

The app, which is available on both laptops and desktops, means that viewers can stream Amazon Prime Video without having to rely on a browser.

The app allows people to download videos to watch offline, rent or buy thousands of titles including new release movies and popular TV shows, and see extra information about actors, songs and other trivia while watching with Amazon’s in-built X-Ray feature, powered by IMDb. It also allows Amazon Prime members to subscribe to premium and specialty channels such as STARZPLAY, hayu and ITV Hub+, through Amazon’s add-on platform, Amazon Prime Video Channels.

For Amazon Prime subscribers, of course, there’s also access to all of Amazon’s original series, including The Boys, Hunters, The Expanse, Jack Ryan, Hanna and more.

The app runs on both x86 and ARM versions of Microsoft’s operating system and puts Amazon one step ahead of Disney+, which does not yet have an app available for Windows computers.

A full Amazon Prime membership costs £79 a year or £7.99 a month, including free premium delivery, plus in-built photo storage and music streaming, or a Prime Video subscription costs £5.99 a month. Monthly plans have no contract and can be cancelled at any time.

Selling Sunset on Netflix: Escapism in its truest form