What's coming soon to Netflix UK in October 2020? | VODzilla.co | Where to watch online in UK

Netflix is getting its scary on this October, from the new season from the makers of The Haunting of Hill House and the return of The Alienist to Ben Wheatley’s take on Rebecca and a family-friendly adaptation of A Babysitter’s Guide to Monster Hunting – not to mention a new Halloween comedy from Adam Sandler or, on a more immediate level, a David Attenborough documentary charting the current situation of our planet.

But there are treats as well as tricks up Netflix’s sleeve, from rom-com Emily in Paris and Sundance winner The Forty-Year Old Version to K-pop doc BLACKPINK, the third season of Star Trek: Discovery, a new series based on the podcast Song Exploder, a chess drama starring Anya Taylor-Joy and Aaron Sorkin’s awards contender The Trial of the Chicago 7.

And, to top it all of, there’s Sarah Gavron’s Rocks, arriving hot on the heels of its UK cinemas release for those unable to catch it on the big screen.

FX’s groundbreaking series about New York’s ballroom culture in the 1980s and 1990s only gets better with its second season.

Carmen is a modern day Robin Hood traveling the globe and stealing from V.I.L.E. and giving back to its victims. Carmen is publicly perceived as a criminal by most law enforcement agencies – correction, make that a master criminal due to the sheer scale and theatricality of her heists. We will follow her escapades and get to determine not only where but who in the world is Carmen Sandiego?

A serial killer with no limits. A system full of flaws and several hopeless victims. Nothing will stop Verônica’s fight for justice in this new Brazilian series.

You’ve Got This – 2nd October

An ad creative and a successful exec have a great marriage – until he wants to be a dad just as her star is rising. Then he brings someone new home.

“I’m the girl who shows up, not the girl who makes bad decisions.” That’s the sound of Emily in Paris, Netflix’s new romantic comedy series.

Written and exec-produced by Sex and the City creator Darren Star, the series follows Emily, an ambitious twenty-something marketing executive from Chicago who unexpectedly lands her dream job in Paris. Lily Collins stars and also produces.

Hrishikesh Hirway’s excellent podcast, which gets musicians to take apart their own songs, piece by piece, gets the Netflix TV treatment.

David Attenborough: A Life on Our Planet – 4th October

Also fresh from a UK cinema screening on 28th September, this documentary tells the story of life on our planet by the man who has seen more of the natural world than perhaps anyone else.

Adam Sandler brings his signature brand of humour to the trick-or-treat season with this new comedy about Hubie Dubois (Sandler), who thanklessly spends every Halloween making sure the residents of his hometown celebrate safely and play by the rules. But this year, an escaped criminal and a mysterious new neighbour have Hubie on high alert. When people start disappearing, it’s up to Hubie to convince the police that monsters are real.

Inspired by the works of Henry James, including The Turn of the Screw, if this follow-up to The Haunting of Hill House has a fraction of that show’s scares and serious examination of trauma and fear, it’s going to be something very special indeed.

Based on Universal’s multi-billion dollar franchise, Netflix’s animated series follows teenager Tony Toretto, who takes after his cousin Dom when he and his friends are recruited by a government agency to infiltrate an elite racing league serving as a front for a nefarious crime organisation bent on world domination. Now, they’re back for a second lap.

Written and directed by Radha Blank, this Sundance winning drama follows frustrated New Yorker Radha (played by Blank), who, nearing 40 and still struggling as a playwright, turns to a different kind of stage, awakening a rapper alter-ego named RadhaMUSprime. As her revitalised artistic voice blossoms, Radha must learn to juggle her two personas and two unique New York art scenes.

Kipo and the Age of Wonderbeasts: Season 3 – 12th October

The Great Mutant Outbreak of 2017 caused creatures to grow to an incredible size and develop incredible intelligence, forcing humans to scatter for underground. After a giant mutant attack dumps her on the surface far away from her Terrarium home, Kipo gets a crash course on apocalyptic survival. She soon bands together with other surface dwellers – both human and mutant – on her journey to locate home, her father and the missing people of her underground city. Netflix’s visually stunning animation returns for a third chapter.

This music documentary charts the meteoric rise of the South Korean four-member superstar girl group. Directed by Caroline Suh (Salt Fat Acid Heat) and produced by RadicalMedia, the film interweaves exclusive interviews with never-before-seen footage of Blackpink members Jisoo, Jennie, Rosé and Lisa, from their trainee days to the global sensations they are today.

When high school freshman Kelly Ferguson reluctantly agrees to babysit on Halloween, she is recruited into a secret society of babysitters who protect kids with special powers from monsters. Based on Joe Ballarini’s popular book series, A Babysitter’s Guide To Monster Hunting is directed by Doctor Who veteran Rachel Talalay, adapted by Ballarini himself and stars Tamara Smart (Artemis Fowl), Oona Laurence (Lost Girls), Alessio Scalzotto (Rim of the World), Ian Ho (A Simple Favour) with Indya Moore (Pose) and Tom Felton (Harry Potter franchise).

After following Commander Burnham into the wormhole in the second season finale, Season 3 finds the crew of the USS Discovery landing in an unknown future far from the home they once knew. Now living in a time filled with uncertainty, the crew must work together to restore hope to the Federation. Episodes arrive weekly after their US debut.

The Trial of the Chicago 7 – 16th October

In 1968, with the whole world watching, democracy refused to back down. What was intended to be a peaceful protest at the 1968 Democratic National Convention turned into a violent clash with police and the National Guard – and a notorious trial follows. Aaron Sorkin’s drama, starring Sacha Baron Cohen, Joseph Gordon-Levitt, Frank Langella and Eddie Redmayne, hits Netflix after a UK cinemas run in early October.

Dreams come true for real families looking for the perfect home tailored to their own unique style, thanks to Shea and Syd McGee of Studio McGee

During the 18th century, a new disease makes the aristocracy’s blood turn blue. This reimagined history brings a new perspective to the history of France.

Netflix’s hit reboot of the 1980s true crime docuseries returns to tell the stories of more unsolved cases with another opportunity for viewers to turn armchair detective.

Ben Wheatley directs this new adaptation of Daphne du Maurier’s gothic novel. Starring Armie Hammer and Lily James, the film follows a young newlywed who arrives at her husband’s imposing family estate on a windswept English coast and finds herself battling the shadow of his first wife Rebecca, whose legacy lives on in the house long after her death.

My Next Guest Needs No Introduction: Season 3 – 21st October

David Letterman’s series of in-depth, understated conversations with famous people from around the world returns for another chapter.

Set amid the underbelly of New York City’s Gilded Age, the period crime drama follows Laszlo Kreizler (Daniel Brühl), a brilliant and obsessive “Alienist” in the controversial new field of treating mental pathologies, who teams up with a boisterous journalist (Luke Evans) and an ambitious secretary determined to become the city’s first female detective.

Based on Walter Tevis’s novel of the same name, The Queen’s Gambit chronicles the life of the orphan chess champion, who grows from the age of 8 to 22, struggling with addiction as well as the sexist attitudes that prevail around her. Anya Taylor-Joy stars in the series, with Godless director Scott Frank at the helm.

Over the Moon – 23rd October

Fueled with determination and a passion for science, a bright young girl builds a rocket ship to the moon to prove the existence of a legendary Moon Goddess. There she ends up on an unexpected quest, and discovers a whimsical land of fantastical creatures. Directed by Oscar-winning filmmaker and animator Glen Keane.

Fed up with being single on holidays, two strangers agree to be each other’s platonic plus-ones all year long in this festive romantic comedy from Adventures in Babysitting writer Tiffany Paulsen.

As a young refugee couple tries to start over in England, they’re tormented by a sinister force born of the horrors they escaped in war-torn South Sudan.

Other new releases coming soon to Netflix UK in October 2020: 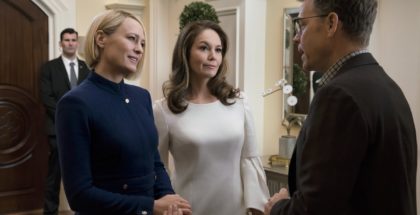