VOD TV review: Homeland Season 3, Episode 6 (So Positive) | Where to watch online in UK | How to stream legally | VODzilla.co

Did we mention Saul's beard?

Finally, Homeland feels like the shocking thriller we used to know and love (not to breathe through).

“This is just the f-cking beginning.”

If Quinn (Rupert Friend) wasn’t so good at his job at the CIA, he’d be a great choice for head writer of Homeland: another week, another pithy summation of the show’s current situation. Because finally, after flipping between old form and new flops, Homeland is 100% back at its best. For the first time in Season 3, CBS’s CIA series feels like the surprising thriller we used to know and love (not to breathe through).

So Positive’s shocks start right from the off, as Carrie (Claire Danes) is carted away by Javadi (Shaun Toub) and subjected to a lie detector test – a first sign that we’re straying into reassuringly familiar territory. But when the polygraph struggles to compute her Cryface, she swiftly switches the tables, trying to recruit him as a CIA asset, rather than spill national secrets.

“When did you and Saul’s beard cook up this plan?” he asks, knowingly. Yes, Saul’s facial fuzz (Mandy Patinkin) and he have got previous. What, exactly? No one says. But Shaun Toub wastes no time in proving to be a tough customer: his calm smile and snazzy formal suits are prone to give way to sudden violence or downright psychotic acts. If last week’s strip search had you squirming, wait until you see what he does here.

Claire Danes combats his unpredictable behaviour with her own unbalanced presence, but keeps her cool when the heat’s hot. So far, so thrilling.

But it wouldn’t be Homeland, of course, without some kind of bonkers plot twist. So Positive’s is conceived in the bathroom halfway through – a worryingly predictable personal diversion from the professional spy work. How the relegation is handled will determine whether the show veers into soap opera or super-tense drama, but on the plus side, it doesn’t involve Dana. Morgan Saylor and her mum do continue their subplot of moving on in Brody’s absence (his son Chris remains – naturally – silent on the matter), but take up only a few minutes of screen time; with her boyfriend out the way, Saylor can work her own Cryface magic without derailing the whole narrative.

Indeed, the rest of it does feel like it’s on rails: as Dar Adal prepares to hand over CIA control to – boo – Senator Lockhart, operations, surveillance and covert meetings fly past at a pace sorely missing from earlier, slower outings. “Get the drones,” Saul commands, only for them to arrive seconds later. This is national security, baby. And they don’t waste time with runaway teenagers.

What a delicious conclusion, then, as Saul’s and Javadi’s well-trimmed moustache square off for the first time; a moment of facial hair frisson that not only packs a nice back-story punch, but also suggests Saul is only getting started. With some domestic arguments peppering his stubble, Mandy Patinkin is acting the hell out of his character’s journey: from outsider to unlikely boss to unhappily married spook to angry avenger, what started as out-of-character plotlines are now beginning to form a far more complex picture. Do we really know Saul at all?

“This is just the f-cking beginning,” observes Quinn. Six episodes in and we’re So Positive he’s right. Homeland? HOMGland, more like. 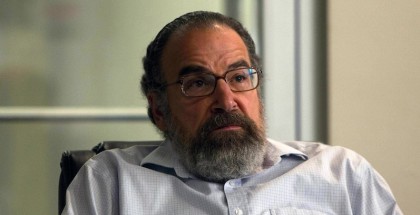