Mads Mikkelsen in a wet shirt

A break-up more traumatic than The Notebook.

As the net closes tighter around Hannibal and his network of trappers, once again the circle widens to re-admit Kade Purnell (Cynthia Nixon), who, having got wind of Will and Jack’s sting, is coming to stop these two vigilantes in their tracks. But even the long arm of the law cannot hold back good Old Testament justice; nothing will stop Will and Jack on their mission to trap Hannibal.

Mizumono translates literally as “a matter of water”, and water analogies twist throughout the Season 2 finale like tributaries, from Will’s idyllic fishing stream to Alanna’s flooded nightmare, all leading up to the rain-drenched climax that ensures there’s not a dry eye in the house.

The finality of this episode leaves all the characters to ponder their legacies – from Will advising Freddie on the contents of her book to Hannibal paying one last visit to the bedside of Bella Crawford, made even more bittersweet in the knowledge that we’re unsure who will be widowed first. Both Bella and Freddie are survivors of Hannibal, and it’s fitting that they be the doomed cast members’ last contact with the living world, before the final act’s descent into darkness. But when the reckoning – the fight scene between Hannibal and Jack that we got a glimpse of at the start of the season – comes, we realize that this was only a taste of the true emotional force of the last stand.

As well as dealing with the inevitable bloodbath (this is as much a matter of blood as it is a matter of water), we deal with the emotional fallout of Will and Hannibal’s destructive, all-consuming relationship. In recent episodes, they have danced a merry dance around each other, weaving their traps, but they have also been performing the courtship rituals of nature’s most majestic creations. As they prepare, seemingly, to run away together, their love affair looks complete, until one final, heart-wrenching betrayal – part-covered in a speech delivered by Hannibal that is so gripping and sad you again wonder what the Emmy review board were smoking when making this year’s awards shortlist. On both sides, it brings an end to a partnership of respect and reverence. The reckoning has come and gone, the fires of revenge extinguished by the rain.

As well as terrific acting, Mzumono is a fitting tribute to the series as a whole, with all the elements that make up its strange beauty given their own time to shine. From the excellent camerawork to the stunning visuals, betrayal and mass murder have never looked so good as they do here. This episode, almost totally devoid of colour aside from a few key accents – Kade’s red suit, Hannibal’s feasts and Freddie’s ever-bright hair – allows for the shadows to come to the fore, which gives Hannibal and Will’s steely stares even more sinister angles (all the better to imagine the Wendigo horns growing from both their heads).

Credit must also go in spades to composer Brian Reitzell, whose mastery of music has been one of the show’s greatest assets, but who has produced no finer work than in this episode. The frantic opening scenes, set against the backdrop of ticking clocks and tapping metronomes contrasts beautifully with the swooping, soulful Bach arrangement to accompany the end scene; an emotional crescendo we’ve been waiting for.

But orchestrating all this genius is the masterful Bryan Fuller, who has delivered again with a truly exceptional season – and one of the finest show finales in recent memory. The awards may not love his horrifying and wondrous creation, but the fans certainly do.

Hannibal Season 2 is available on Netflix UK, as part of an £8.99 monthly subscription.

NOW TV now available on PS4 and Xbox One

Wuaki.tv predicts the death of browser streaming within 2 years 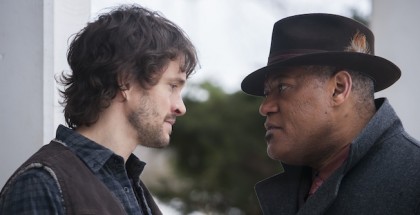