Netflix UK film review: The Secret Life of Pets | VODzilla.co | Where to watch online in UK | How to stream 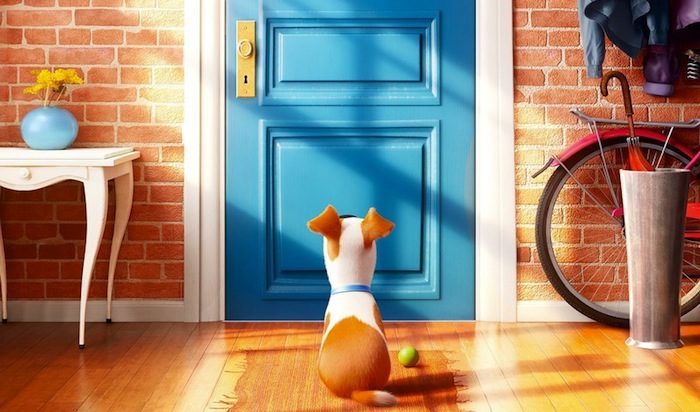 The Secret Life of Pets is an efficient but soulless animation.

Illumination Entertainment, the studio behind Minions, may be the McDonalds of animation. There’s no nourishment, nothing remotely approaching quality food. Yet, from time to time, you think, “Hey, I could really go for a McDonalds right now”. Afterwards, you leave feeling physically and spiritually empty.

Take The Secret Life of Pets as an example. Remember that joke from Up, where Dug the Dog got easily distracted by squirrels? Well, imagine that one joke stretched out over 87 minutes, far beyond its natural breaking point. Then Sellotape this one joke onto the plot of Toy Story (but replace toys with animals) and you have the entire planning meeting, production and end result.

There’s not a shred of originality or wit to this film. Sure, the animation is efficient and nicely textured. New York here is brightly coloured, gleaming and unfeasibly clean. Both the city and the film look great, but utterly fake. There’s a glossy but soulless shine and the stultifying competence of Pets shows that being technically impressive does not necessarily make for good animation.

The lack of weight to the visuals only highlights the utter flimsiness of the story. Chase scene follows chase scene, as the action becomes increasingly meaningless and it’s difficult, once the credits have rolled, to remember one plot or action beat. Even the characters become difficult to remember, as you cast your mind back into the haze of mediocrity. Jenny Slate’s little ball of fluff, Gidget, and Kevin Hart’s evil rabbit leave the biggest mark, but the two main characters make almost zero impact, in spite of affable voice work.

The problem is the whole film feels as factory-produced as the frankfurters that the dogs feast on. Even that scene’s most surreal moment feels like a boardroom-produced piece of calculated zaniness, a prequel to Sausage Party that flirts with being weird and never commits to being fully bonkers. Pets being silly is inherently funny, but a compilation of viral YouTube clips strung into a vague plot does not make a satisfying film.

At one point, a bus careens over a bridge and, on the back doors, you see an advert for Sing, the next film from the studio. It’s a clever, calculated move, yet no child is going to cherish The Secret Life of Pets. Few people will look back on it fondly in later life and cherish their Blu-ray as millions today cling onto their copy of Finding Nemo or Cinderella.

The Secret Life of Pets is available on Netflix UK, as part of an £8.99 monthly subscription.

Where can I buy or rent The Secret Life of Pets online in the UK?