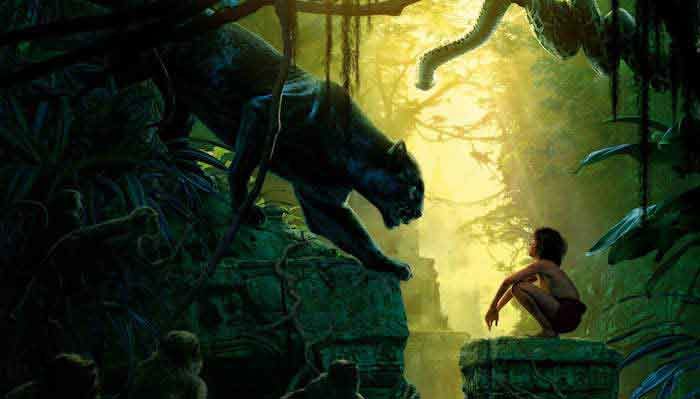 Why remake The Jungle Book? If the result is something this gloriously entertaining, why not?

The idea of remaking The Jungle Book is enough to make any Disney fan concerned, but Jon Favreau’s live-action version will make you forget about your worries and your strife in an instant. Literally, it does that within its first few minutes, as the familiar strains of George Bruns’ 1967 score float over the opening scenes. Relax, kid, it tells us. You’re in safe paws.

Those paws, of course, are no longer animated. At least, not in the conventional sense. This modern take on the familiar tale leaps straight into the uncanny valley of CGI creatures. Its confidence pays off: the animals really do look realistic, more so than any others you’ve ever seen, something that gives an immersive quality to Rudyard Kipling’s wild world. It brings with it a renewed sense of peril too; this, you imagine, is what it would actually be like to grow up in the jungle.

Favreau’s handling of the technology is quite astonishing. A director with Elf and Iron Man under his belt, he’s proven himself a reliable pair of hands on studio projects and there’s an underrated talent to make that possible – consider, on the other hand, the number of tentpole movies that come with talks of soured relationships and on-set controversies. The Jungle Book’s computer trickery is perhaps the most overt sign of Favreau’s ability to date – with almost everything on the screen rendered digitally, it takes a skilled filmmaker to coordinate the tying of the seams between the practical and virtual, so that the world-building goes unnoticed. It takes even more skill to make sure his human star can feel comfortable enough to act convincingly against green screens and tennis balls. One behind-the-scenes photo shows that, during swimming scenes with Baloo, Favreau himself paddled in a water tank to coach his young star through it all.

It works: Neel Sethi is remarkable as Mowgli. He has the irresistibly likeable scowl of an underdog determined to prove his worth, the endearing devotion of a cub to his family, and an adorable likeness to the original film’s animation, from his costume to his movements. The fact that he can convey such fear, wonder and excitement faced with an empty room is nothing short of marvellous.

The supporting cast are just as good, ensuring that the laughs are sincere and the scares serious; Bill Murray as Baloo is a surprisingly brilliant choice, giving his slacker mentor a hustler vibe to go with his chilled philosophy, while the new Shere Khan growls with the gruff, intimidating vocals of Idris Elba. Ben Kingsley brings gravitas to Bagheera and Scarlett Johansson is superbly sibilant as slithering snake Kaa. Even Christopher Walken as King Louie works well, his entitled outrage matching his transformation from an orangutan to a colossal Gigantopithecus.

Walken’s only hint of a weak spot comes in his rendition of I Wanna Be Like You, but the decision to include a handful of familiar Disney songs is the epitome of the film’s finely balanced ambition and execution, of nostalgia and forward-thinking – composer John Debney deftly echoes the original’s music, but adds his own themes to bump the intensity of the action up several notches. Any changes that are made to the songs are done with equal respect (Richard Sherman himself contributed updated lyrics to I Wanna Be Like You), while the musical numbers are contrasted with verses from Kipling’s The Law of the Jungle.

“The strength of the Pack is the Wolf, and the strength of the Wolf is the Pack,” Mowgli tells us, and those themes of pack loyalty and clan leadership, alongside the usual exploration of identity and belonging, places The Jungle Book 2.0 closer to The Lion King in terms of depth and scale. Why remake a Disney classic? By the time the heart-stopping finale arrives, any questions you have are long forgotten. If the answer is to produce something this gloriously entertaining, why not?

The Jungle Book is available on Netflix UK, as part of an £8.99 monthly subscription.

Where can I buy or rent The Jungle Book online in the UK?

UK TV review: Inside No. 9: The Devil of Christmas (2016 Christmas special)