VOD film review: The Ice King | Where to watch online in UK | How to stream legally | When it is available on digital | VODzilla.co 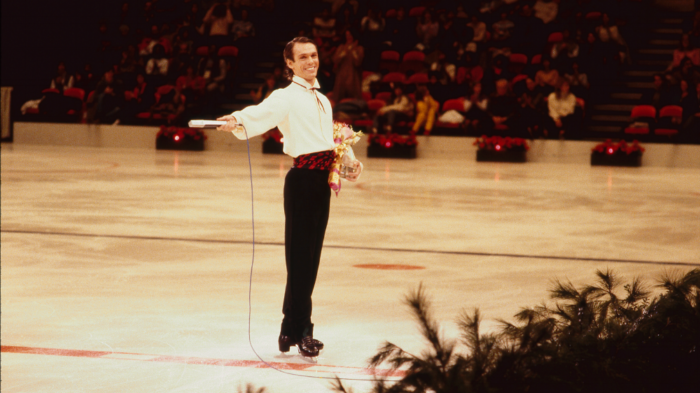 An engaging portrait of a significant sportsman who never set out to be an activist.

This year, figure skater Eric Radford of Canada became the first openly out gay man to win a Winter Olympics gold medal at the Pyeongchang 2018 Games. It’s the kind of milestone that is equally welcome and belated – and it’s put into stark context by the arrival of The Ice King, which swoops into cinemas and onto VOD this weekend. The documentary follows 1970s legend James Curry, a British figure skater who was gay, but at a time when homosexuality wasn’t even fully legal. Director James Erskine examines the man in rewarding, intriguing detail, teasing out the life story of a man who is likely unknown by many today.

The cultural icon is largely lost in today’s world of sporting celebrity, but he had an undoubted impact upon figure skating, wowing audiences with technique and rebuking judges by refusing to skate within the lines of convention. Before Curry, male ice skating was an athletic, physically vigorous sport, one that took effort and strength. Curry, though, was a man of grace and elegance, turning the sport into dance, blurring the lines between ballet and skating. A host of vox pops, not to mention the man himself, give even newcomers to the sport an insight into just how different his perspective was, cut together with impressive footage of him in action – both in contest, where his use of arms and whole body marked him out from the competition, and on stage, where he turned joint ice dancing into something decidedly steamy.

The Battle of the Sexes helmer Erskine is a veteran at this kind of stuff, and he deftly balances accessibility and information with skill. Crucially, he makes no attempt to dress Curry up as an angel: we hear of his sometimes cruel attitude towards students, particularly when it came to weight, and his weariness with the sport, as he reached the latter stages of his career. Both balance out his commitment to skating on the iced-up Cambridge Theatre stage, even when it wasnt fully ready and might cause injury, and his ability to choreograph entire routines in his head on a short-haul flight.

Based on the book by Bill Jones and narrated with sympathy by Freddie Fox, the result is an engaging portrait of a significant sportsman who never set out to be an activist. Rather, his reach and influence was largely kept to the world of dance, in the way he drew together sports and arts, but this Olympic and World Champion paved the way for generations to come, setting an example for artists and sports stars alike to express themselves on a global stage.