Netflix UK film review: The Hole in the Ground | Where to watch online in UK | How to stream legally | When it is available on digital | VODzilla.co

Netflix UK film review: The Hole in the Ground

Deeper than you think

If you go down to the woods today, you’re in for quite an entertaining surprise, actually. In a sub-genre as oversaturated as horror films about creepy children, it’s always a delight to see something that wears its influences on its sleeve and yet so forcefully establishes its own unique tone.

Director Lee Cronin’s low-budget Irish chiller largely takes place in a house on the edge of a seemingly endless forest. The story starts with Sarah O’Neill (Seána Kerslake) and her young son, Chris (James Quinn Markey), settling into a new home after recently escaping from Chris’ abusive dad. Still rattled, Sarah is concerned that Chris is acting out because of the split.

Their surroundings don’t help. Not far into the dense forest, there’s an enormous crater that prompts the young mum to forbid her son from venturing out there alone. However, she only grows more worried when she loses track of him one night and his acting out takes on a rather uncanny edge.

Not 12 months after Hereditary blew everyone’s socks off, this is an entertaining scary-kid spookfest that’s unsettling without ever being as purely terrifying. While the terror of Ari Aster’s barn-burner was by turns existential and then exposition-heavy, The Hole In The Ground feels far more rooted in recognisable horrors.

Cronin and Stephen Shields have written a film that focuses on characters rather than plot devices. While the central mystery ranges from the titular chasm to the odd behaviour of new neighbours (James Cosmo and Kati Outinen), it’s about how Sarah and Chris interact with the environment into which they’ve been hurled. Cronin is able to rely on and showcase the terrific lead performances by Kerslake and newcomer Markey. Following a long line of mothers who know something’s up but aren’t yet sure what it is, Kerslake distinguishes herself marvellously, getting a lot of mileage out of what little ambiguity the film presents.

But it’s the tone that sets this apart. That extends beyond the location – a neighbourhood perched over an unfixed forest that could have come out of either a fairy tale or a ghost story – to build a growing unease for both mother and son. The consistently engaging creep factor of it all is a triumph of perspective. Even if your horror-savvy brain keeps flagging up visual references to films like The Shining, The Babadook, The Descent, and more, it feels original in the moment, because we’ve grown invested in the characters.

All you really need to know on the horror front is that the film earned its 15 certificate for horror alone. It may be a bit tame for hardened genre fans, but when it’s scary, it’s scary without resorting to gore or shock tactics. It’s refreshingly short on jump scares too, foregoing all the obvious setups for a loud, startling noise and instead amplifying its unnerving ideas instead.

There’s foreshadowing that might sound clumsy if described out of context, but the pay-offs are always so satisfying that you don’t really mind. Granted, it grows a little breathless in the end, leaving plot holes (in the ground) that may bother you afterwards, but its testament to the atmosphere it creates that it never bothers you while you’re in it.

If nothing else, The Hole In The Ground puts up a damn good impression of being original. Impressive performances and mild genre subversion aside, this searching fable that dwells on the unexpected is deeper than you think.

The Hole in the Ground is available on Netflix UK, as part of an £9.99 monthly subscription.

Where can I buy or rent The Hole in the Ground online in the UK? 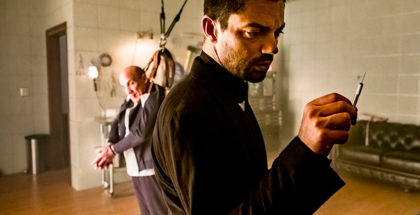