VOD film review: The Deminer | Where to watch online in UK | How to stream legally | VODzilla.co

A Kurdish Colonel disarms Iraqi mines with a pair of pliers in this harrowing portrait of a real-life hero.

You can keep The Hurt Locker – this harrowing documentary from co-directors Hogir Hirori and Shinwar Kamal is the real deal. Intensely gripping from beginning to end, it depicts the real-life heroism of Fakhir Berwari, a Kurdish Colonel and father of eight, who dedicated his life to de-activating mines in Iraq between 2003 and 2014.

The majority of the film unfolds through the equivalent of home movie footage. Three years after Fakhir’s death in 2014, his son Abdulla found a trunk full of DVDs containing hundreds of hours of footage of Fakhir just doing his job, calmly de-activating explosive devices, often without protective clothing and using just a knife and a pair of pliers. That footage was then paired with more professionally shot material from 2014, the result of a planned film by co-director Shinwar Kamal.

The scenes of Fakhir defusing the mines are extremely intense, heightened by the obvious fear of his accompanying cameraman – variations on the phrase “Shouldn’t we leave this one?” are heard more than once. The tension is further intensified by the fact that the film opens with a shot where it’s obvious Fakhir has a false leg, so you spend each de-activation scene wondering if this will be the one. Inevitably, one of them is indeed the one and it’s genuinely terrifying. Similarly, many of the mines are connected to mobile phones, so every time you hear a ringtone you brace yourself for the worst.

Fakhir’s story is nothing short of astonishing. Even after losing his leg and being told he’s no longer suitable for the job, he insists on returning to work as a volunteer, to the utter disbelief of his family, who struggle to understand his decision. We don’t hear much from Fakhir himself on the subject, but he sums up his philosophy with one devastatingly simple line: “If I fail, it’s just my life, but if I succeed, hundreds of lives will be saved.” In fact, it’s more like thousands and thousands, because Fakhir apparently just kept going, earning the local nickname “Crazy Fakhir” in the process.

The only thing that seems to be missing from the film is a sense of who Fakhir was outside of his job. There is archive footage of Fakhir with his family and a short but upsetting to-camera interview with Abdulla and his mother, recorded after his death (where it’s clear they are still struggling to process their loss), but both raise more questions than they answer. Evidently, Fakhir’s drive to save lives became something of an addiction and the film’s apparent refusal to explore that aspect of his life is a ultimately little frustrating.

That quibble aside, this is a remarkable film, equal parts heartwarming in its depiction of true heroism (Fakhir is also seen entreating groups of bystanders to teach their children that violence is wrong), heart-stoppingly tense in its execution, and devastating in its ultimate outcome. 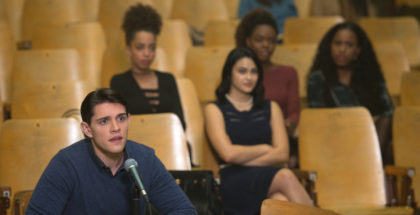