VOD film review: Swung | Where to watch online in UK | How to stream legally | When it is available on digital | VODzilla.co

No sex, please, we’re British. That’s the kind of attitude we’re told is the norm for the UK, but it’s telling how hard it can be to put sex scenes on film. Too far one way, it can be exploitative. Too far the other, it can be laughable. Indie film Swung, then, which dives head-first into Britain’s swinging scene, deserves praise for managing to get it out without making people switch off.

Based on Ewan Morrison’s novel, it follows David (McDonnell), as he struggles to deal with the collapse of his business and the tedium of waiting on the phone to speak to someone about tax and benefits. A couple of bored clicks later and he’s signed up to a swinging site – something that appals his girlfriend, Alice (Anaya), until she realises that she can use it for the basis of a magazine feature. And so the pair embark on a journey of discovery into the seedy world of hook-ups.

It’s an impressive achievement by director Colin Kennedy, not least because this is his first feature. But if it gets the stuff between the sheets right, Swung loses its mojo when we leave the bedroom. McDonnell and Anaya – who was excellent in The Skin I Live In – have a good chemistry, but that same earnest sincerity translates into on-the-nose dialogue during the more serious moments. Alice, meanwhile, takes only a few minutes to become a fully paid-up member of the Unconvincing Movie Journalists club: if her exchanges with her editor carried half of the crackle of the naughtier side of the story, Swung would stick far more coherently. Things come together, though, for the final act, which finds a neat juxtaposition between public orgy and private argument. The result is an indie flick brave enough to take on a risque subject with a straight face. When it finds its sweet spot, Swung fully arouses your attention. 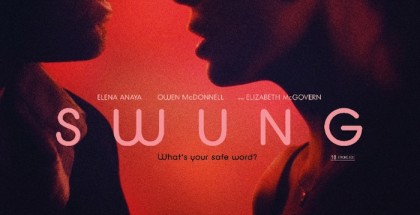