VOD film review: Revenge | Where to watch online in UK | How to stream legally | When it is available on digital | VODzilla.co

This super-stylish debut feature from French writer-director Coralie Fargeat brings an intriguing female perspective to the revenge genre, while splattering industrial quantities of the red stuff and delivering some of the most wince-inducing violence you’ll see all year.

Set in a remote desert location (meant to be somewhere in America, but filmed in Morocco), the film stars Matilda Lutz as Jen, the young mistress of attractive, wealthy Richard (Kevin Janssens), who brings her out to his luxury villa for a spot of sex and drugs before a planned hunting trip. Unfortunately, Richard’s sleazy buddies, Stan (Vincent Colombe) and Dimitri (Guillaume Bouchede), arrive earlier than planned, and after a violent assault, Jen is pushed off a cliff and left for dead in the desert. However, unbeknownst to the men, she survives her ordeal and sets out to wreak violent and bloody revenge.

Lutz is terrific in a performance that cleverly ensures the audience underestimate her almost as much as her attackers do. The Lolita-esque figure (complete with lollipop and star-shaped earrings) she cuts in the opening scenes is a far cry from the harbinger of fury and retribution she becomes, yet she makes the transition believable, not least by demonstrating her resilience and resourcefulness with a painful-to-watch display of self-surgery.

Janssens is equally good as the epitome of toxic masculinity and entitlement, something the film delights in demolishing with the equivalent of a hefty kick to the unmentionables. Colombe and Bouchede are both effective as the scumbag duo that set everything in motion and there are some chillingly effective little touches, such as Bouchede’s casually oblivious reaction when he witnesses the assault.

The script contains surprisingly little dialogue, but that scarcely matters once the action gets going, and Fargeat proves adept at both cranking up tension and paying it off with spectacularly gory death sequences that are liberally drenched in blood.

She has fun turning some of the standard objectification tropes on their heads, most notably in an ill-timed shower sequence that results in Richard having to defend himself while naked. That sudden shift of the usual perspective is a consistent theme in the film, and Fargeat takes a series of jabs at misogyny (the detail of Jen’s supposedly fatal wound is surely no coincidence) and toxic male attitudes with jet-black humour. She also packs the film with a number of memorably surreal details, from a shot of ants crawling over an open wound to a hallucinatory peyote sequence.

The production design is gorgeously stylish throughout, from the strikingly photographed desert exteriors (courtesy of magnificently named cinematographer Robrecht Heyvaert) to the inspired use of stained glass windows as colour filters on the villa interiors. There’s also a terrific electronic score from Robin Coudert (aka. Rob), if you like that sort of thing. This is a provocative, superbly acted and thrillingly directed genre movie that’s well worth seeking out – and marks Fargeat as a serious talent to watch.

Revenge is available to stream online on Shudder UK, as part of a £4.99 monthly subscription, or £49.99 yearly membership.

Where can I buy or rent Revenge online in the UK?

VOD film review: Under the Wire 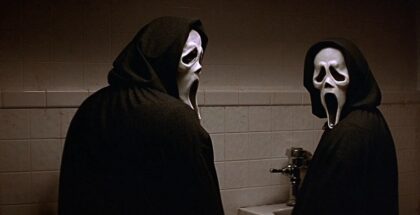