VOD film review: Palm Springs | Where to watch online in UK | How to stream legally | VODzilla.co

As sweet as it is cynical, this smart, funny, charming chron-rom-com is an absolute blast.

Almost 30 years after Groundhog Day, the very idea of film about someone getting stuck in a time loop rather aptly feels far too familiar. The fact that Palm Springs arrives just a matter of weeks of The Map of Tiny Perfect Things, another modern take on the genre, only adds to the skeptical sensation of deja vu. But that cynicism comes ready-baked into Palm Springs, playing like the smart-alecked cousin to Tiny Perfect Things’ more earnest, sentimental teen flick. As our protagonist casually puts it, it’s “one of those infinite time loop situations you might have heard about”.

Positioned almost as a sequel to its own premise, we first meet Nyles (Andy Samberg) long after he’s at home in his repetitive world – a cycle that sees him get up and go to a wedding where his obnoxious girlfriend, Misty (Meredith Hagner), is the maid of honour. He passes the time by lounging in the swimming pool, drinking beer, surfing through the dance floor with precise choreography, drinking more beer, dodging a guy with a crossbow, and even more drinking.

Somewhere in the middle of all this, he meet-cutes Sarah (Cristin Milioti), the sister of the bride, who is also an outsider at her sibling’s big day, hovering on the edge of the party and looking on with a jaded sense of disillusionment. Like Tiny Perfect Things, their burgeoning connection gets a thrilling sense of actual meaning because she ends up reliving the day over and over as well – and what could be a lonely journey of self-examination through an endless chrono-limbo instead becomes a romantic comedy about two people bonding through mundane routine.

A lot of the joy stems from just seeing them interact, whether it’s staging a dance number in a bar or flying a plane. Andy Samberg delivers his best performance yet as the seemingly carefree loner, with even his coiffed hair getting limp out of resignation to nothingness. He’s perfectly matched by Cristin Milioti (How I Met Your Mother, Black Mirror), who has more than enough smarts and sarcasm of her own to spare. They’re supported by a stellar ensemble, which includes a wonderfully dark JK Simmons as a fierce guest, a convincingly naive Camila Mendes as bride Tala, an amusingly cheesy Tyler Hoechlin as groom Abe and Peter Gallagher as the flawlessly eyebrowed father of the bride, Howard.

Andy Siara’s script is gloriously stuffed with absurdities and one-liners that gives them at least one delightful outburst each. Whether it’s someone shouting “He glues teeth!” or the first time you hear the name “Roy”, the laugh count ranks among cinema’s greats. “Would you kill me one more time? Just to beat the traffic?” asks Nyles at one point, the epitome of the kind of self-aware irony that lives up to audience expectations of The Lonely Island (who recently gave us Popstar: Never Stop Never Stopping).

But Palm Springs’ success lies in the way that it not only plumbs the sinister depths of a meaningless existence with an archly raised eyebrow, but also manages to find a deceptive sweet spot amid the irony. What begins as a tale of worn-out thirty-somethings who share a spiky nihilism becomes a beautiful exploration of relationships and potential, in which learning to be present in the moment doesn’t equal responsibility, and in which commitment is not just about accepting someone else’s past but also accepting the consequences of one’s own actions in the future.

At the helm, director Max Barbakow makes a confident feature debut, one in which every background detail tells its own story and in which no line of dialogue or meaningful glance is wasted. It’s a lean, sharp burst of entertainment, one that has its Groundhog cake and eats it; where that was a masterclass in montage, Palm Springs finds fun in repeatedly taking us to new places and seeking out new possibilities, forever finding ways to break the rules of its own constraints, even as the burned-out youngsters at its centre initially find some comfort in never having to leave their rut.

The result is a thrilling, surprising puzzle-box that keeps your brain guessing all the way through but, like its central couple, gets your heart caring anyway as they contemplate stepping away from the universe’s sidelines. By the end, just watching them floating in a swimming pool will put a grin on your face. After all, who cares about seizing the day with big gestures when you can seize control of spending it doing nothing instead?

Palm Springs is available to watch online on Amazon Prime Video as part of a Prime membership or a £5.99 monthly subscription. 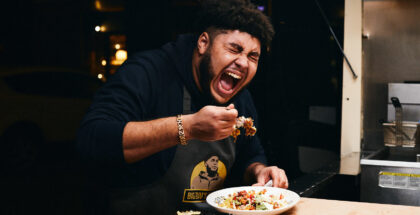