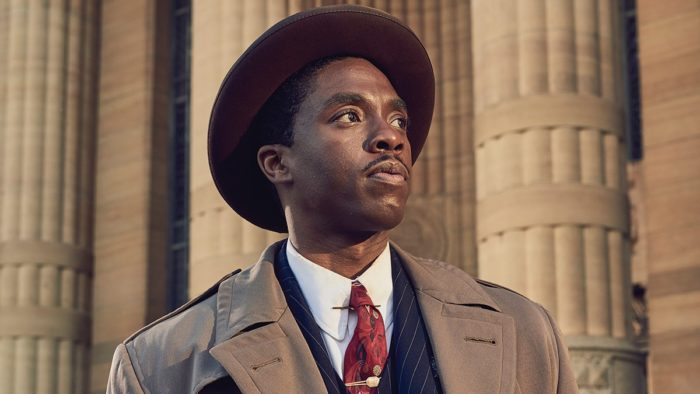 Chadwick Boseman is on hugely winning form as Thurgood Marshall in this likeable legal drama.

Chadwick Boseman. If that name isn’t burned into your memory by his star-making recent turn in Marvel’s Black Panther, Marshall (nominated for an Oscar at the 2018 Academy Awards) is the film to do it.

Reginald Hudlin’s drama takes us back to the early days of Thurgood Marshall, the famous civil rights lawyer who made history with his segregation cases in the USA. In 1941, the NAACP attorney finds himself defending a black man, Joseph Spell, accused of rape by Eleanor Strubing, a white, married woman. There’s more than a touch of Atticus Finch to proceedings, and the script certainly does follow procedure: a familiar formula dictates the way the case plays out, from surprise witness revelations to carefully coached lies, all capped off by the stern presence of James Cromwell as the judge presiding over events.

But while that sounds underwhelming and conventional, Jacob Koskoff and Michael Koskoff’s script (Jacob also worked on Justin Kurzel’s Macbeth) delicately finds the right balance between accessible crowd-pleaser for fans of the genre and important historical turning point. And that balance allows Hudlin to open up the courtroom space and let his leading man loose.

Boseman doesn’t disappoint. After playing Jackie Robinson in 42 and James Brown in Get On Up, he once again proves his acting chops by sinking his teeth into the part of a major real life figure – and, where the temptation might be to overdo grandstanding speeches, he dazzles by underplaying everything. He turns Thurgood from the kind of righteous man who could be a two-dimensional protagonist into a fully-rounded character, from his tender relationship with his wife to his spiky bromance with the white lawyer, Sam Friedman (Gad), who has to front Spell’s defence in a prejudiced legal system.

Gad is extremely likeable in support, sharing in a taste of the discrimination facing Marshall without trying to steal the spotlight. Kate Hudson, meanwhile, reminds us how good she can be as Mrs. Strubing, as much unhappy wife as she is angry accuser. Sterling K. Brown, meanwhile, who has impressed repeatedly in This Is Us, does lots with a little as the man on the stand. (Watch out, too, for an unrecognisable Dan Stevens as the bullying attorney on the prosecution side of the court.)

Hudlin pieces it together with a warm nostalgia, stylishly accompanied by a knowingly jazzy score by Marcus Miller, but Boseman is never drowned out, filling up the screen with his charismatic, heartfelt presence. You don’t need powers and a suit to be a hero – and you don’t need to see a Marvel movie to tell that this is a blockbusting star on the rise.