Netflix UK film review: LoveTrue | VODzilla.co | Where to watch online in UK | How to stream

The film focuses on three separate subjects in three very different corners of America. In Alaska, kind-hearted 25-year-old Blake Gurtler begins a relationship with Joel Storm, who’s afflicted with a brittle bone disease, although she worries that her job as a stripper will eventually drive them apart. In Hawaii, coconut salesman Willie Hunt has already split from his childhood sweetheart, but he’s dealt a further shattering blow, when he discovers that he’s not the biological father of his young son, Honu. And in New York, teenaged singer-songwriter Victory Boyd busks on the streets with her loving father John and six other family members, but is thrown into confusion when she discovers the truth behind her parents’ separation.

The hook of the film is that the stories are connected by three acute moments of devastating heartbreak, forcing each character to readjust their perceptions of true love and the new reality of their lives going forward. The result is powerfully emotional, heightened by the fact that the subjects are such likeable, warm-hearted people. This often makes the film difficult to watch, particularly in Willie’s case, as we clearly see the violent turmoil the revelation causes.

The stories would be fascinating enough, even if they were just filmed straight, but Har’el elevates the material into something truly special with an inventive directorial approach that is equal parts improvisation and on-screen therapy. The technique is best exemplified in the case of Blake – alongside straightforward reconstruction sequences of an upsetting childhood memory, with an actor (or, more accurately, a non-actor) playing young Blake, Har’el later inserts the real Blake into that reconstruction to effectively comfort her younger self. Similarly, Har’el casts an older stripper (Mary Langford) Blake has bonded with at the strip club to play “Old Blake” (she wears a t-shirt with that written on it) and the pair have touching, heart-to-heart conversations that clearly prove therapeutic for her.

Har’el takes a similar approach with Victory, where she casts an actress (Chineze Enekwechi) to play her estranged mother and improvise conversations with her father, although this ends up having a complex impact, because it’s through Enekwechi’s conversations with Victory’s actual mother that the truth about the split comes out, with Enekwechi’s reaction reflecting that of the audience, who, up to now, has had the same rose-tinted view of John as Victory.

There’s an atmospheric and suitably dream-like score from Flying Lotus and Har’el includes a number of nice little touches, such as the fact that the strip club (where Blake lives as well as works) is symbolically named Reflections. Several genuinely uplifting scenes will stay with you, whether it’s Victory branching out on her own and performing her own (really impressive) songs to a crowd, or simple shots of Willie larking about with the actor playing his younger self.

LoveTrue is available on Netflix UK, as part of an £8.99 monthly subscription.

Where can I buy or rent LoveTrue online in the UK? 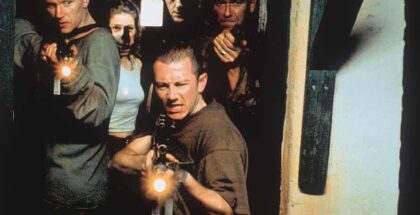