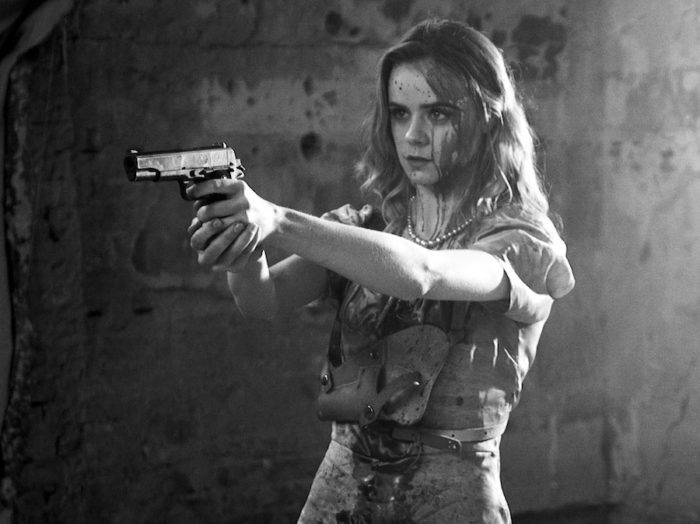 The feature debut of director and co-writer Jack McHenry, Here Comes Hell is an inventive low-budget British horror that cleverly mixes 1930s pastiche with 1980s-style gore. As such, it’s not entirely without flaws, but it’s extremely entertaining.

Shot in black-and-white and set in 1930s England, the film opens with a host (Jasper Bretton) standing in front of a curtain and warning the audience that what we are about to see is not for the faint-hearted (a nice nod to James Whale’s Frankenstein). Suitably forewarned, we check in with a group of friends as they gather for a dinner party at a dilapidated mansion recently purchased by excitable toff Victor (Charlie Robb). The group includes Victor’s acid-tongued sister, Christine (Margaret Clunie), wealthy Texan George (Tom Bailey), suave tennis pro Freddie (Timothy Renouf) and his fiancée, Elizabeth (Jessica Webber), the only one of the group who doesn’t come from money.

After a tense meal, in which rivalries quickly rear their heads, Victor brings out a medium (Maureen Bennett) and announces that he intends to hold a séance to contact the house’s previous occupant, deceased occultist Ichabod Quinn (Nicholas Le Prevost). However, something goes badly wrong and soon the group are dealing with demonic possession and terrifying apparitions, as they realise they have opened a portal to Hell.

McHenry directs with a strong sense of pace, starting off slowly as we get to know the connections between the characters and then kicking into high gear once the séance begins. After that, the pace never lets up, with copious amounts of Evil Dead-style gore flying in all directions.

Indeed, the effects work is generally excellent, even if you suspect it wouldn’t be quite so excellent if the film wasn’t in monochrome. That said, McHenry deploys a combination of practical effects, make-up, camera tricks and animation to impressive effect, achieving some effectively icky gross-out sequences in the process. He has a good feel for both jump scares and nicely staged shock moments – he’s a dab hand at orchestrating an effectively suspenseful sequence, most notably a scene in a corridor involving a close encounter with a passing monstrosity. He also gets the tone exactly right, landing firmly on the side of straight-faced pastiche rather than tongue-in-cheek parody.

That’s not to say that everything’s perfect. For one thing, McHenry’s pastiche skills don’t extend much beyond the use of back-projection, black-and-white photography and Academy ratio. To that end, it occasionally looks and feels like a student film, with the amateurishness occasionally distracting.

The performances are also a little uneven. Clunie and Webber are the stand-outs as the two rivals forced to put aside their differences and Renouf is good value as Freddie, but Robb is a little too over-the-top as Victor and Bailey never quite convinces as a Texan. More to the point, it’s clear that McHenry intended the cast to imitate the cut-glass British accents of the 1930s movies, but he doesn’t seem to have communicated that idea to the entire cast, with the result that some sound more modern than others.

On top of that, there’s a mildly irritating issue with the film’s internal logic – in one (admittedly superb) sequence, something bad happens to someone, only for that person to pop up a couple of minutes later as though nothing happened.

Nonetheless, this is an entertaining and enjoyable British horror that leaves you wondering what McHenry might be capable of when handed a bigger budget. It also has a commendably short running time, clocking in at a mere 73 minutes.