VOD film review: The Night Eats the World | VODzilla.co | Where to watch online in UK

This impressive French horror stands out as a zombie apocalypse tale with brains.

Zombies mattered once. Zombies were the coolest. Zombies were a cult concern ruined by the mainstream. Therefore, it can be hard to care about – or, indeed, find – a zombie apocalypse tale worth a damn. Dominique Rocher’s The Night Eats The World doesn’t reinvent the zombie wheel, but it uses a generic survival-horror backdrop as means to provide a riveting psychological drama focused on social anxiety and the struggle to connect with people.

For a good 50 minutes or so, The Night Eats The World might be the best (unofficial) adaptation of Richard Matheson’s I Am Legend (1954) we’ve seen yet. The ground-breaking sci-fi horror novel about the last man on Earth spending his days searching for food and fellow survivors, while his nights are spent drowning out the din of bloodthirsty vampires and getting sloshed because he’s lonely, was a major source of inspiration for George A. Romero’s Night of the Living Dead (1968). But movies haven’t served the text well – until now.

Sam (Anders Danielsen Lie) is a slightly nerdy type attending a party at his ex-girlfriend’s Parisian apartment, ostensibly so he can retrieve a box of cassette tapes. Feeling out of place among the din of strangers, he suffers a nosebleed, sits quietly in a room, locks the door to stop anybody intruding and falls asleep. When he awakens, the streets of Paris have descended into zombie-fuelled chaos and the partygoers transformed into the ravenous undead.

Director Dominique Rocher isn’t afraid to linger on Sam’s utter boredom as much as his occasional skirmishes with the walking dead. Imagine, if relatively safe locked up in a spacious Parisian apartment building, how boring would your days be? For the zombies might claw at the doors and windows, but as the song goes: “You keep on knocking but you can’t come in.” Sam spends his days exploring other apartments, playing the drums, trying to rescue a cat and is generally content to sit tight and not go anywhere.

The Night Eats The World is the story of a man stuck in a rut, living in the past and too frightened to move on. Whether surrounded by flesh-eating hordes or strangers at a party, Sam feels disconnected from the living and the dead. It’s a clever conceit on which to hang a zombie movie and lead actor Lie presents all facets of Sam’s psychological makeup with much humour and emotional depth.

But don’t assume Rocher isn’t interested in providing genre thrills and zombie spills. The director doesn’t cheat the audience on the gore front, nor on traditional action and suspenseful set pieces. The film is primarily a sole effort from Lie, although French cinema icon Denis Lavant is also brilliant in the small but important role of Alfred; a snarling and then increasingly bored-looking zombie stuck inside an elevator, the trapped decaying cannibal becomes Sam’s Man Friday during his time in purgatory.

Where can I buy or rent The Night Eats the World online in the UK?

Death Note sequel in the works at Netflix

Catch Up TV reviews: How to Lose Seven Billion Pounds, Inside Alton Towers, Court of Appeal, Manhunting with My Mum 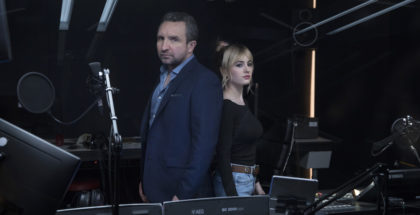