VOD film review: Graduation | Where to watch online in UK | How to stream legally | When it is available on digital | VODzilla.co 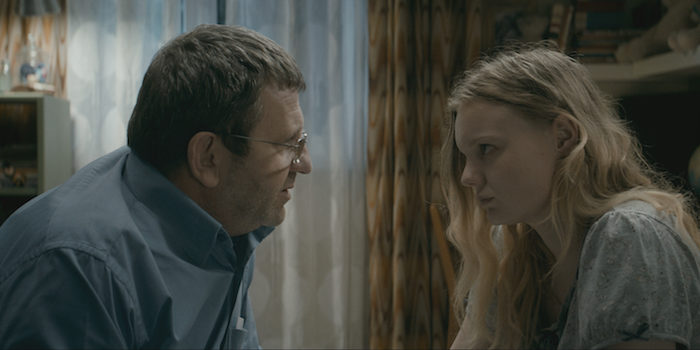 Cristian Mungiu's latest is an enthralling, agonising voyage into the moral abyss.

Romania is hell; that’s the abiding message of so much of the country’s superb New Wave of filmmaking. In Graduation, the country’s leading director, Cristian Mungiu (4 Months, 3 Weeks and 2 Days), shows how the smell of brimstone continues to taint the nation. This is a study of how the corruption and cronyism, left over from Ceausescu’s days, infects even well-meaning citizens and poisons the hope of the next generation.

Roman (Titieni) and Magda (Bugnar) are a middle-class couple who moved to the country after the revolution, intent on making a difference. Instead, they’ve ended up sacrificing luxury to give daughter Eliza (Dragus) a better start. Her education is about to pay off with a scholarship to the UK – where, her dad reliably informs her, she’ll chase squirrels in Kensington Gardens – except the day before her final exams begin, she’s assaulted.

As the pressure and shock affect her performance, the event sparks a desperate scramble to circumvent the rules. Roman is a doctor, one who has hitherto (and somewhat self-righteously, given he’s hardly a bastion of moral virtue at home) refused bribes for preferential treatment. Yet he’s well-connected and when a local bigwig needs to jump the queue for a transplant, he suddenly has a favour he can call in.

From here, Mungiu draws out an agonising voyage into the moral abyss, which will have the ironic effect of undoing everything Eliza’s parents wanted from her. The very fact that they’ve brought up a child specifically to get her out of Romania is already a bleakly ironic condemnation of their parenting, and a head-in-the-sand refusal to acknowledge their culpability in the system. It’s low on laughs, but Mungiu’s control of the story, which won him Best Director at Cannes, has such a lacerating sense of anger it remains enthralling.

At the film’s start a stone is thrown through Roman’s house. While not directly related to the main plot (although there are enough hints to guess the culprit) it’s the symbolic act that breaks the dam. From there, Mungiu shoots in long takes that prove that, even in a secretive society like this, there’s nowhere to hide from your actions. Whichever way Roman turns, at some point he’s going to have to face the judgement of others – and himself.

Graduation is available on All 4.

Where can I buy or rent Graduation online in the UK?